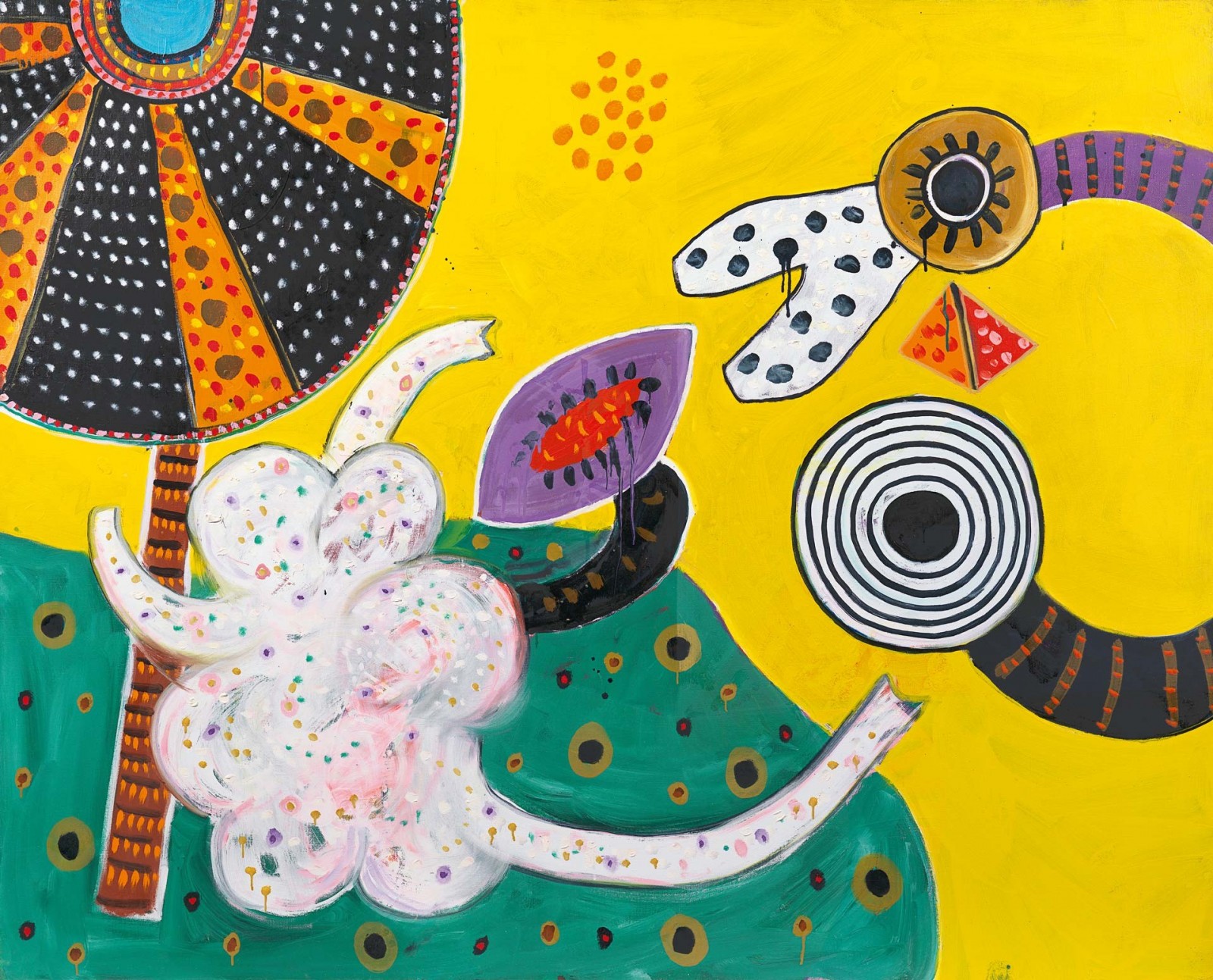 The Richard Green Gallery is delighted to present a summer exhibition of paintings by the celebrated Scottish artist, Alan Davie (1920- 2014), highlighting the artist’s rich and complex oil paintings from 1954 to 1976 on display at 33 New Bond Street from 12th June until 17th July.

Davie’s international reputation rapidly developed during the 1950s. In 1956 his first solo exhibition in New York at the Catherine Viviano Gallery sold out, with works purchased by the Museum of Modern Art and the Albright Knox Art Gallery. Goddess of the green, 1954 featured in Davie’s New York debut and was purchased by Stanley J Seeger (1930-2011) before the exhibition opened. As Davie’s paintings were unpacked, Seeger visited the gallery and met with the owner and the American abstract expressionist artist, Jackson Pollock (1912-1956), when Goddess of the green caught his eye. Pollock’s reaction, as recounted by Seeger, was instinctive ‘I know exactly what he means, push and pull, black and white, good vs bad’. Pollock’s evident awe, as well as the vitality and immediacy of the painting, convinced Seeger to buy it. It was the first of many works by the artist to enter his collection. Two years later, Davie’s first retrospective exhibition was held at Wakefield City Art Gallery (its impact on the young David Hockney to be explored in October in ‘We Two Boys: Early Works by David Hockney and Alan Davie’ at The Hepworth Wakefield), before touring to three other venues, including the Whitechapel Art Gallery, London.

As well as representing the maturation of his remarkable colour sense, Davie’s work of the early 1960s reveals for Alan Bowness, ‘a positive, optimistic quality about the pictures that makes them among the most life-enhancing of our time.’1  Predominantly executed on canvas, Davie’s painting became more controlled, his shapes more clearly defined, often articulated with calligraphic black paint. The paintings produced during this decade also saw an increased interest in the spaces between shapes, the gleeful introduction of candy colours and new ranges of symbols. For Patrick Elliot, the joyful freedom apparent in Davie’s painting reflected happiness in the artist’s personal life: ‘While the epic works of the fifties often have sombre titles, suggesting rituals, sacrifice and shamanism, those of the 1960s are lighter in spirit, comical and brilliantly inventive...This lighter, brighter tone reflects something of the joie de vivre of Davie’s life at the time, when he was flying his glider, scuba diving, sailing and driving his E-Type Jaguar.’2  Davie painted four versions of the bright and playful Ball Game series in September 1960, as well as a small oil on paper, entitled Red’s New Ball Game No.1 (Manchester City Art Gallery), which is closely related in colour and composition to Ball Game No.4 at Richard Green.

Several of Davie’s paintings refer to his love of jazz music and modern jazz titles. Davies had a promising career as a saxophonist in a jazz group in the 1940s, and the exploration of rhythm, colour and freedom of form in the artist’s improvised style can be compared to the manner in which a jazz musician might take and develop a theme instrumentally. Jumpin’ at the Woodside, 1970, directly references the title of a jazz song with the same name, written in 1938 by the American jazz pianist, William ‘Count’ Basie.

In later works, such as, Sorcerer’s Wall No.3, 1970, the artist invokes his interest in magic, which can also been seen in Transformation of A.D. No.4, 1970 and Fairy Tree No.8, 1971, both included in the exhibition, ‘Magic and Strong Medicine’ at the Walker Art Gallery, Liverpool in 1973. An interest in primitivism, myth and magical symbolism in the 1960s saw recurring symbols from diverse world cultures in his paintings hereafter, representing a synthesis of fictional narrative mythologies, for example his seminal work Goddess of the green, 1954, and Dancer Myth No.3, 1976. Writing on the importance of magic in the artist’s work and the sources of his eclectic imagery, Michael Tucker revealed: ‘Magic is a word which Davie often uses when talking about art : the magic of exaltation, of transformation – of the passage from isolation and depression to unity and affirmation, and from the exhaustion of history to the plenitude of origins…As is well known, the search for magic in painting has led Davie deep into what Jungians would call the collective unconscious ; one might say the same about the music he recorded between 1970 and 1975. It is possible to discern in Davie’s work echoes of ancient shamanic rites; Egyptian symbolism; Tantric art; the Western magical tradition, and a host of other cultures from neolithic Britain to aboriginal Australia, and from West Africa to Native America. And, throughout, there is the unmistakable mark of Davie’s own Celtic heritage, in both the luminosity of his colours and the organic interplay of his linear invention’.3

A fully illustrated catalogue with introduction by Helen Little will accompany the exhibition.