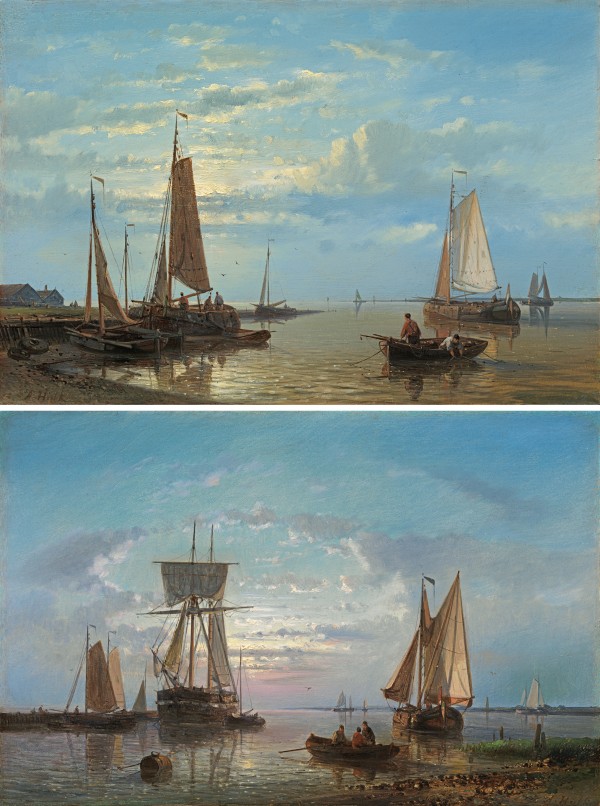 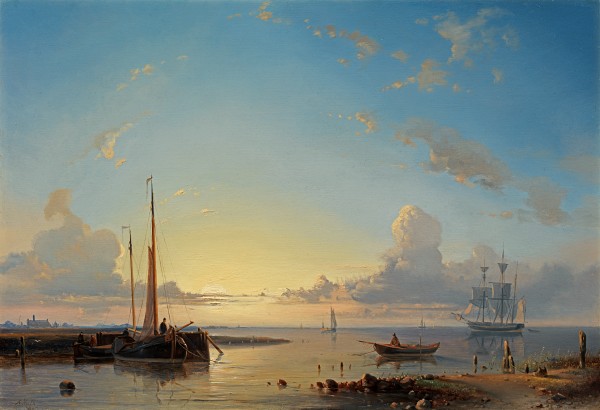 Abraham Hulk Snr specialized in marine subjects and Dutch estuary scenes, inspired by the coastal waters of The Netherlands. He showed a particular talent for capturing the effects of calms and storms. Abraham was the senior and most important member of the Hulk family of artists, which also included his brother Johannes (1829-1911), an animal painter, and his sons Hendrick (1842-1937), a marine painter, Abraham Jnr (1843-1919) and William (1852-1906), both landscapists.

Born in London in 1813, the son of a Dutch textile merchant, Hulk grew up in Amsterdam. He studied at the Amsterdam Academy with the portraitist Jean-Augustin Daiwaille (1782-1850). From 1833 he was in America, travelling to Boston and New York, eking out a living as a portrait painter and writing a lively travel diary. The many voyages that Hulk took, as well as his early life in the port of Amsterdam, influenced his decision to become a marine painter after returning to that city in 1835 and marrying Maria van der Meulen (1808-1875) the same year. He sent his first seascape to the Amsterdam Exhibition of Living Masters in 1836 and exhibited also in The Hague and Leeuwarden. A restless soul, Hulk lived in Amsterdam, Nijkerk, Enkhuizen, Haarlem and Oosterbeek. He owned a sailing boat and excursions on the Zuiderzee provided endless inspiration for his marine views.

In 1862 Hulk was made an honorary member of the Imperial Academy of St Petersburg. In 1875 he settled in London, taking advantage of a strong English clientèle for his Dutch marine scenes. He lived in a handsome house at 42 Mornington Road, St Pancras from 1875 to c.1890. Hulk exhibited at the Royal Academy in 1876 and 1890 and at the Society of British Artists’ Suffolk Street galleries. Hulk died in Zevenaar in 1897 while visiting his son-in-law Carl Wesper.

The work of Abraham Hulk Snr is represented in the Amsterdam Museum; the Zuiderzeemuseum, Enkhuizen; the Teylers Museum, Haarlem; the Gemeente-Archief, Dordrecht; the Ferens Art Gallery, Hull; the Towneley Art Gallery, Burnley and the Cooper Art Gallery, Barnsley.