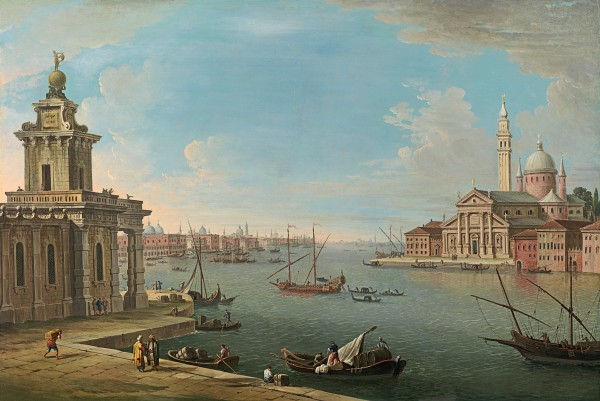 Antonio Joli was an Italian view painter and scenographer. Born in Modena, he studied with Raffaello Rinaldi and one of the members of the Bibiena family, famous for their theatre designs.  By 1718, Joli was in Rome, where he probably trained with Giovanni Paolo Panini, the painter of vedute and architectural capricci. He gained an important commission to decorate the Villa Patrizi and in 1719 became a member of the Accademia di San Luca.

Joli was back in Modena by circa 1725, where he worked for the Duke of Modena. In 1732 he is first documented in Venice, where he designed stage sets for the San Cassiano and San Samuele theatres; his work was admired by the leading Venetian playwright, Carlo Goldoni. During this period Joli painted many views of the city, influenced by Canaletto, Marieschi and Carlevarijs.

Joli left Venice in 1742 and went first to Dresden and then to London, where he worked as a scene painter and assistant manager at the King’s Theatre, Haymarket from 1744 to 1748. He also worked on topographical overdoors and decorative schemes, such as that painted for the impresario John James Heidegger at 4 Maids of Honour Row, Richmond (still in situ).

By 1750 Joli was in Madrid, where he remained for four years, working for Charles III of Spain at Buen Retiro as a scenographer and view painter, as well as being commissioned to paint theatrical scenery in the Teatro del Buen Retiro and at Aranjuez. He returned to Venice in 1754 and was elected a member of the Venetian Academy the following year. Joli spent the latter part of his life in Naples, where he finally settled in 1762, employed as Painter to the King in the Court Theatre. Amongst his other illustrious patrons were Sir William Hamilton, Lord John Brudenell, the Duke of Richmond and Lord Spencer.