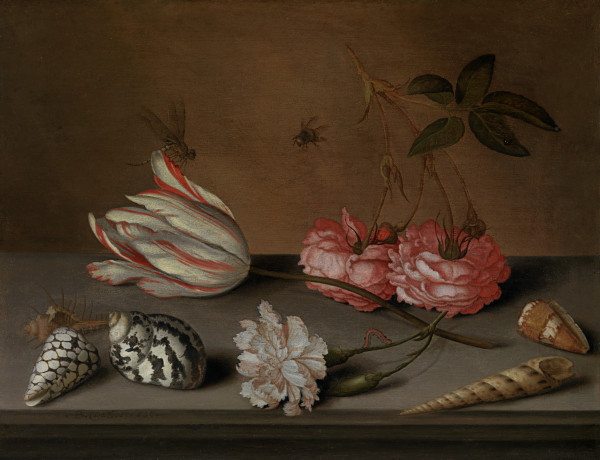 Balthasar van der AstA tulip, a carnation and roses, with shells and insects, on a ledge

Balthasar van der Ast was born in Middelburg in 1593 or 1594, the son of a wealthy merchant in woollen clothing. He was trained from c.1610 in the studio of his twenty-year-older brother-in-law and guardian Ambrosius Bosschaert the Elder (1573-1621). He appears to have taken over the position of the leading painter of still lifes of flowers and fruit in the North Netherlands soon after Bosschaert’s death in 1621. During the 1620s and 1630s, van der Ast’s domicile Utrecht was the main Dutch centre of flower painting; besides van der Ast, among others, Roelant Savery, Johannes Baers, Jacob Marrel and Bosschaert’s sons worked there. In 1632 van der Ast himself moved to Delft where he joined the painters’ guild of St Luke and married the following year. He died there in 1657.