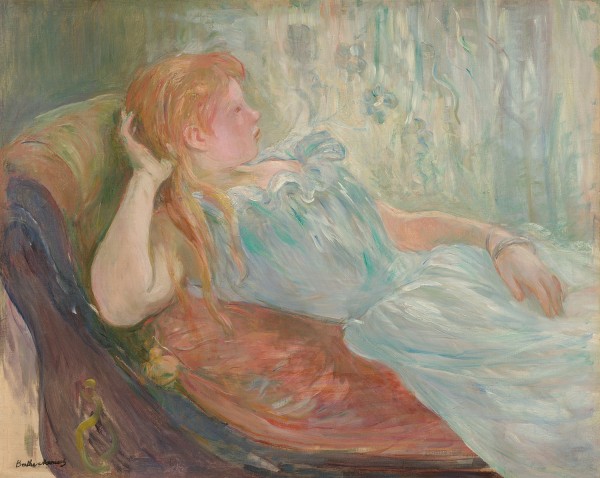 Berthe Morisot was the first woman to join the Impressionists, sharing their aims and contributing to their principal exhibitions.

The early interest she and her sister Edma took in drawing, was encouraged by their parents, who sent them to study with Joseph Alexandre Guichard, a pupil of Ingres.   Under his tutelage, they copied many works in the Louvre.

By 1860, Morisot already expressed a great inclination to paint plein air, and in 1861, she was introduced to Corot, from whom she took lessons and by whom she was considerably influenced.   She worked with him in Ville d’Avray and later, with his pupil, Oudinot, at Auvers, where she met Daubigny and Daumier.

In 1868, she met Edouard Manet, who was to become a close friend, and colour her entire life.   she married his younger brother Eugene in 1874, and that same year, sent nine pictures to the first Impressionist exhibition.

the artistic ambience in which Morisot lived was of great importance to the development of her work, and her friends included Degas, Monet and Renoir, musicians such as Rossini and Chabrier, and the greatest writers of the day, Zola, Baudelaire and Mallarmé.

During the latter part of her career, Morisot showed a renewed interest in drawing, as a fundamental process of modelling and emphasizing the plasticity of her subjects.   She now adopted a style composed of long sinuous stroked as a means of giving linear definition to form.