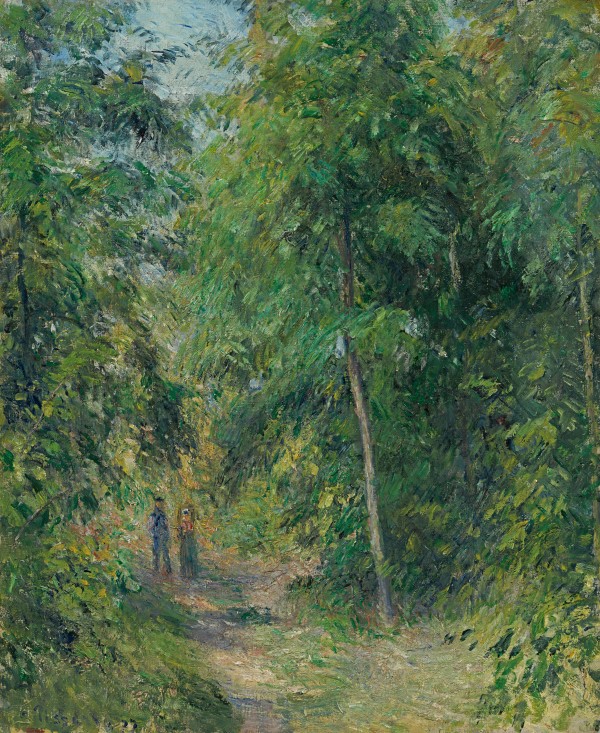 Camille Pissarro was perhaps the greatest propagandist and the most constant member of the Impressionists and the only one to participate in all eight of their exhibitions. Born in 1830 in the Danish colony of St Thomas in the West Indies, of Sephardic Jewish parentage, he went to school in Paris and then worked in his father’s business for five years. Ill-suited to being a merchant, Pissarro decided to become a painter, studying at the Ecole des Beaux Arts and the informal Académie Suisse. He was considerably influenced and encouraged by Corot and to a lesser extent by Courbet.

During the 1860s Pissarro exhibited at the official Salons and in 1863 at the Salon des Refusés. He increasingly associated himself with the Impressionists, especially Monet and Renoir, and with the outbreak of the Franco-Prussian war fled to London, where Durand-Ruel became his principal patron and dealer.

After the war, Pissarro returned to France and settled at Pontoise, spending much time with Cézanne, whom he directed towards Impressionism. In 1884 he moved to Eragny.During the 1890s the meadows at Eragny-sur-Epte, looking across to the village of Bazincourt, became one of Pissarro’s principal subjects, painted at different times of the day and year.

In 1885 Pissarro came into contact with Seurat and Signac and for a brief period experimented with Neo-Impressionism. The rigidity of this technique, however, proved too restrictive and he returned to the freedom and spontaneity of Impressionism.

From 1893 Pissarro embarked upon a series of Parisian themes, such as the Gare St Lazare and the Grands Boulevards. He continued to spend the summers at Eragny, where he painted the landscape in his most poetic Impressionist idiom. Pissarro died in Paris in 1903.