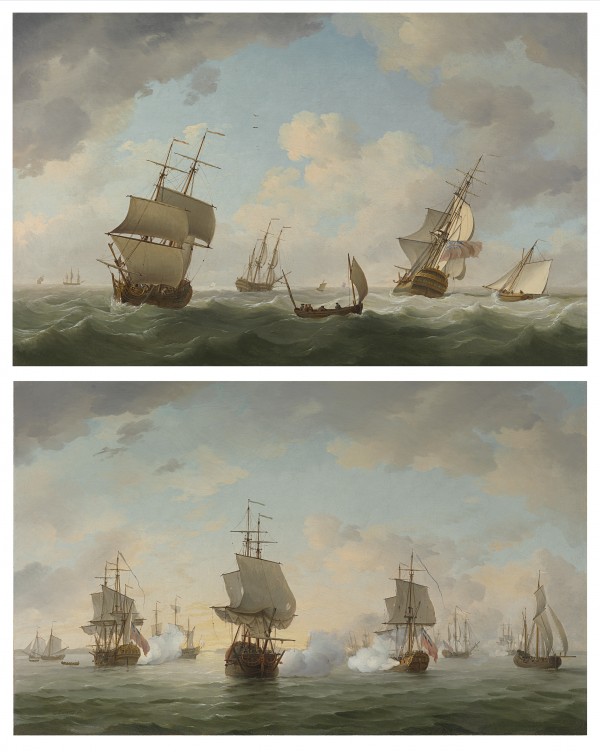 Charles BrookingThe English privateer squadron known as the 'Royal Family' engaging enemy ships; A merchant snow, two of the King's ships-of-war, a lugger and a cutter in the Channel

Despite his short life, Charles Brooking was one of the most influential British marine painters of the eighteenth century. His best work was achieved in the final decade of his life. Brooking excelled at painting shipping in calm conditions, using luminous glazes to give a sense of light on sails moving gently in the lightest of breezes, subtle cloudscapes and the shifting hues and reflections of the sea. He was influenced by Willem van de Velde the Younger and Peter Monamy, but forged his own highly individual style which in turn influenced Dominic Serres the Elder (who may have been his pupil) and Francis Swaine.

Charles Brooking was born in Deptford in 1723, probably ‘bred in some department of the dockyard’; his father may have been the Charles Brooking who was a painter and decorator at Greenwich from 1729 to 1736. He is likely to have been self-taught. Two small marine paintings in a private American collection are signed C. Brooking aged 17 years. In 1752 he worked as a botanical draughtsman for John Ellis’s (?1710-1776) Natural History of the Corallines (1755). Brooking is said to have worked for a dastardly picture dealer in Leicester Square, who concealed his identity so that clients would not be able to commission him directly. However, his paintings portraying the exploits of the ‘Royal Family’ privateers were engraved and published in 1753, the same year as Morning, and in 1754 Taylor White, Treasurer of the Foundling Hospital, commissioned the great sea-piece Flagship before the wind under easy sail (still in situ at the Foundling Museum, London). Brooking, like the other artists who contributed to the Foundling Hospital’s decoration, was made a Governor for his pains.

Brooking depicted naval actions from the War of Jenkins’ Ear, 1739, although he never painted a fleet action. His paintings were informed by a thorough knowledge of the sea; he owned a small cutter, a plan for which survives in the Chapman Collection of the Sjohistorikas Museum, Stockholm. Brooking’s output was limited by the consumption which slowly killed him. He died aged only thirty-six in London in 1759, leaving his family destitute. His widow and children were allocated 10 gns from the profits of the Society of Artists’ exhibition of 1761.