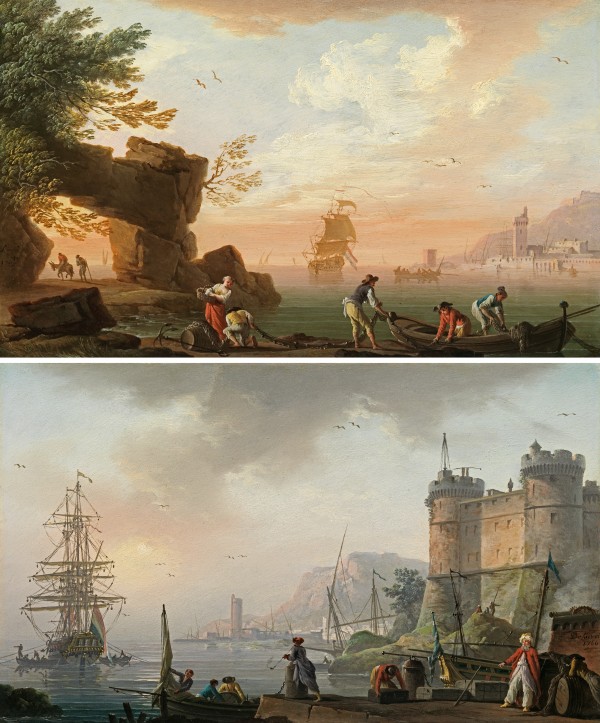 CHARLES-FRANÇOIS GRENIER DE LACROIX called LACROIX DE MARSEILLESunrise: Levantine merchants on a quay below a castle, a Dutch man-of-war at anchor beyond Sunset: fishermen preparing their nets, a port and a Dutch man-of-war beyond

Charles François Grenier de Lacroix, known as Lacroix de Marseille, established his reputation as a painter of Italianate seascapes and landscapes. He specialised in capricci embellished with figures and distinguished by a taste for fantastic architecture. Despite his success during his lifetime, comparatively little is known about him. He used a number of different signatures, signing himself Grenier de La Croix on a Port scene dated 1750 (Toledo Museum of Art, OH) and using Delacroix on an Eruption of Vesuvius of 1767.

Born in Marseille, Lacroix’s first known paintings were two pendant seascapes signed and dated 1743, entitled Italian port at sunrise and Italian port at sunset. By 1754, he had moved to Rome. He visited Naples in 1757, painting Vesuvius and the surrounding countryside. In Rome, Lacroix met Adrien Manglard (1695-1760), the celebrated sea painter from Lyon, and his pupil Joseph Vernet (1714-1789), who was to become the most important influence on Lacroix's work. Lacroix painted seascapes, seaports, storms and sunsets which both in subject and style show his debt to Vernet. His capricci, particularly his depiction of figures, also reflect the influence of Italian artists such as Francesco Zuccarelli (1702-1788) and Marco Ricci (1676-1729/30).

Lacroix was in Paris by the end of the 1770s and exhibited at the Salon du Colisée in 1776. He participated in the Salon de la Correspondance in Paris in 1780 and 1782, and died in Berlin in 1782. During the eighteenth century his paintings were very popular and many were engraved by Le Veau and Le Mire.

The work of Lacroix de Marseille is represented in the Toledo Museum of Art, Ohio; the Dijon Museum of Art and the National Museum, Stockholm.