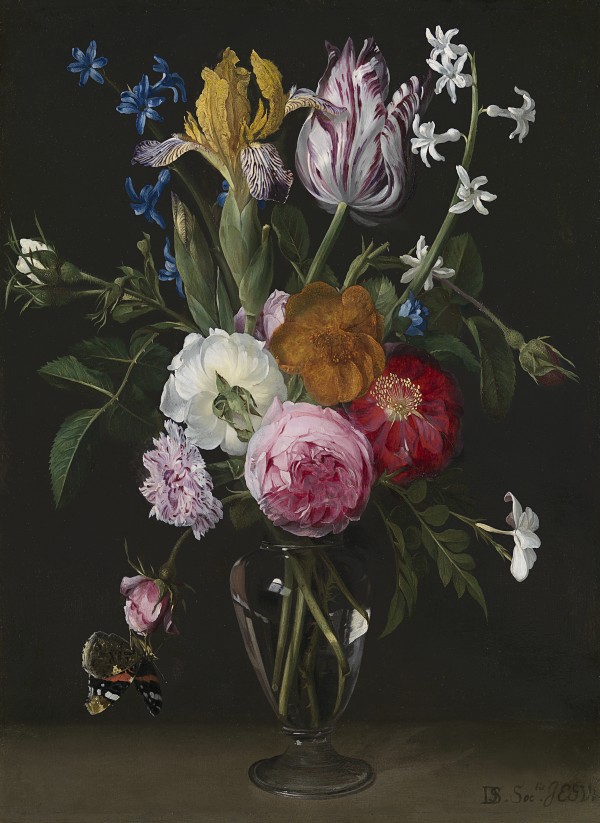 Daniel SeghersStill life of roses, irises, hyacinths, jasmine and a carnation in a glass vase, with a Red Admiral butterfly (Vanessa atalanta)

Seghers’s fame spread throughout Europe. As a Jesuit, who had taken a vow of poverty, he was not allowed to accept payment for his work. His paintings were frequently used by his Order as diplomatic gifts, often to Protestant rulers, as symbols of the cultural resurgence of the Counter-Reformation. His works entered the collections of Prince Frederick Henry of Orange-Nassau, Queen Christina of Sweden and Charles I of England; the young Charles II, exiled in the Netherlands, visited Seghers’s studio in 1649. The polymath Constantijn Huygens (1596-1687), Secretary to three Dutch Stadholders, maintained a lively correspondence with Seghers and they swapped poems and recipes for paints. In 1644 Seghers gave Huygens a garland of flowers which decorate a grisaille portrait of Huygens by Jan Cossiers (1600-1671). It has recently been acquired by the Mauritshuis in The Hague. Unusually for his time, at the age of seventy-one Daniel Seghers made an inventory of the 239 paintings that he had made and their destinations, entitled Catalogue van de bloem-stukken, die ik self met mijn hand heb geschildert en voor wie (Catalogue of the still lifes I painted and for whom)[1]. Seghers only pupil was Jan Philips van Thielen (1618-1667), but his style was highly influential. Seghers died in Antwerp in 1661.