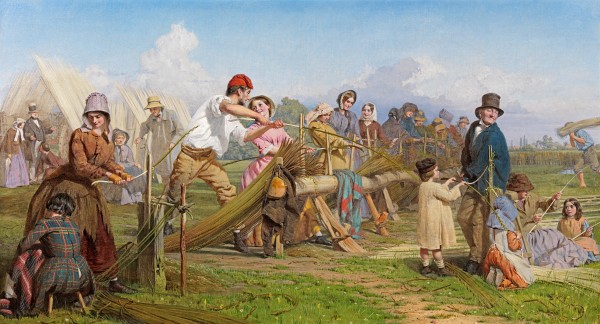 George Elgar Hicks painted a variety of subjects including religious scenes, landscapes and his preferred form of genre scenes. His most famous works were extraordinarily detailed portrayals of Victorian life, reminiscent of the great Victorian novelists Charles Dickens and George Augustus Sala in their narrative intensity and documentary power. Perhaps the best known of these images are General Post Office, one minute to six, Billingsgate Fish Market, Woman's Mission, Changing Homes and Before the magistrates. Later in life, Hicks developed his skill as a portraitist.

The Athenaeum commented upon the significance Hicks’s views of Victorian life would hold for future generations: ‘Mr G E Hicks hit upon a good idea when he resolved to paint for us the scenes which take place at some of the well-known places of business of the City of London...Such pictures, even less well painted than these really are, will be interesting for the future time, and therefore we shall be thankful to get them as creditably executed as [those of Hicks are.]’

Hicks studied for a medical degree at University College, London, before becoming an artist.  He studied at Sass’s Academy and the Royal Academy Schools, which he entered in 1844. He won a Silver medal for his studies from the Antique. He exhibited regularly at the Royal Academy from 1848, though many of his works reached their greatest fame through their exhibition at private galleries, which gained enormous prestige in the mid-nineteenth century art world, in particular Henry Wallis’ French Gallery. The vast dissemination of these compelling images in the form of prints, engraved for the print dealer Louis Victor Flatow, ensured the enormous and enduring popularity of the artist.

He married Maria Harriss in 1847 and the marriage produced six children, Georgina, Edward, Frederick, Mary, Rosa Gordon and Annie. Several died in childhood and Hicks lost his wife Maria in 1880. He remarried in 1884 to Anne Ross. He lived most of his life in London and Hampshire.