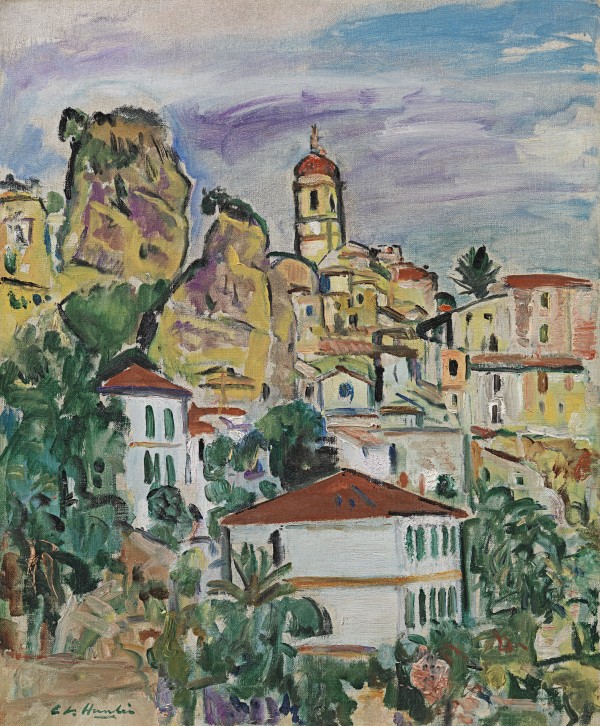 Often considered the most natural of the Scottish Colourists, George Leslie Hunter was primarily a self-taught artist, renowned for this bohemian appearance, eccentric behaviour and above all, his unwavering devotion to art. The son of a dispensing chemist, he first attended Rothesay Academy, but in 1892 his father decided to emigrate to California, where Hunter remained until 1906. During these years he worked as an illustrator for Californian newspapers and magazines, and it was his innate skill as a draughtsman that was later to provide the foundation of his talent.

His first one man exhibition was due to open in San Francisco in 1906, but all the works destined for his show were destroyed by the earthquake. Devastated by this disaster, he returned to Scotland where he became acquainted with Alexander Reid, at whose gallery he held an exhibition in 1916. In 1922, Hunter visited Paris, Venice, Florence and the Riviera Coast, often joined by his friend and colleague John Duncan Fergusson. Following their return, he settled in Fife and painted still lifes and landscapes, many of which were inspired by the house boats at Loch Lomond. Hunter spent much time during subsequent years in the South of France, painting at Saint Paul de Vence, Cassis and St Tropez between 1927-1929. His visits abroad proved highly productive and he exhibited much of his recent work at the Feragil Galleries, New York in 1929, an exhibition that won him considerable critical acclaim.

The instability of Hunter’s health however, seemed insurmountable and that same year he suffered the most serious of his breakdowns. Although he continued to paint and produced some of his finest and most sensitive works during these later years, Hunter died after an unsuccessful operation in 1931.