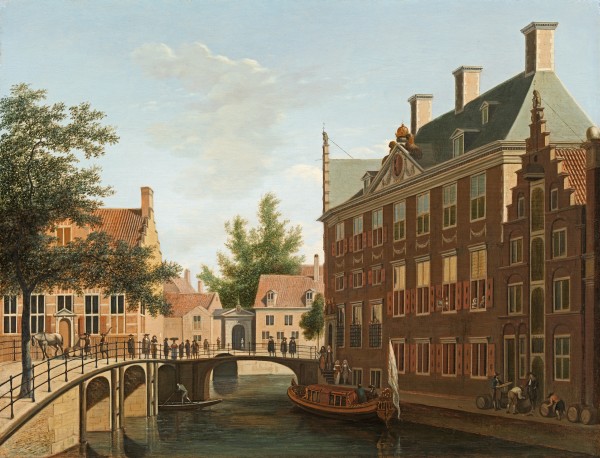 Baptised in Haarlem on 6th June 1638, Gerrit Adriaensz. Berckheyde was the son of a butcher, Adriaen Joppen Berckheyde, and his wife, Cornelia Gerritsdr. Pancier. His brother, Job (1630-1693), who was eight years his senior, probably taught him to paint. In the 1650s, the two brothers made an extended trip to Germany, but they had probably both returned to Haarlem by 1654, when Job was admitted to the Haarlem guild of St Luke. In 1660, Gerrit, too, joined the Guild, and produced his first signed and dated works the following year. During this period, he shared a house with Job and his sister, Aechje, in the Sint-Jansstraat, close to the Grote Markt. None of the siblings seems to have married. Gerrit specialised in city views, particularly of his native Haarlem, the northern Netherlands’s commercial capital, Amsterdam, and The Hague, seat of the Court. He also made views of German cities and idealised, Italianate countryside.

From 1666-1681, Gerrit was a member of the Haarlem rederijkerskamer called De Wijngaardranken (The Vine Branch), an association to which many artists belonged. In 1679 the two brothers signed a lease on a house next to the bell-tower, near St Bavo’s church in Haarlem. Both brothers held offices in the painters’ guild during the 1680s and 1690s. Job died in 1693 and, five years later, Gerrit drowned in the Brouwersvaart, while taking a shortcut through a private garden after leaving a tavern. He was buried in the nave of the St Janskerk on 14th June 1698.