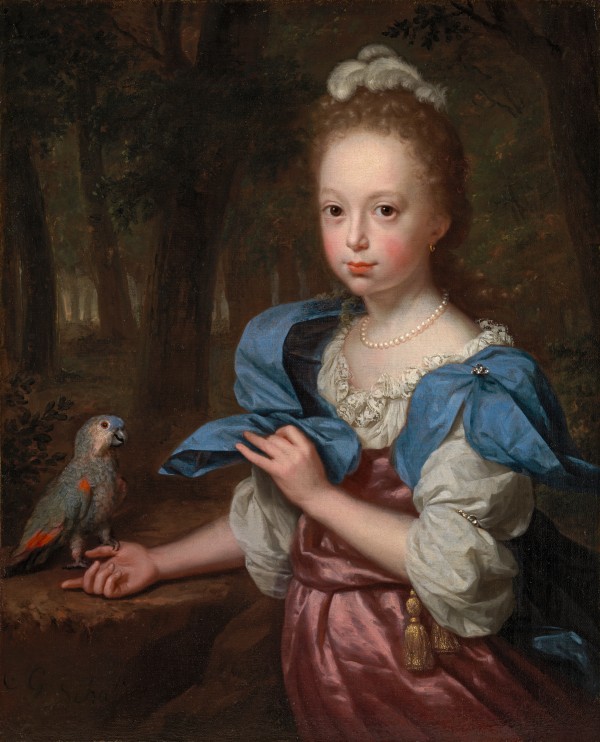 Godfried SchalckenPortrait of a girl in a pink dress, with a parrot in a forest landscape 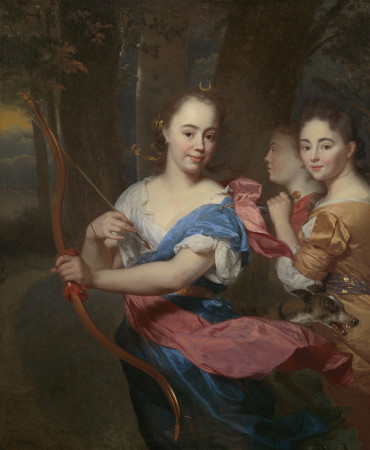 Godfried SchalckenPortrait of a young lady as the goddess Diana attended by her nymphs, in a forest with a hunting dog

Godfried Schalcken was born in 1634 at Made, north of Breda, the son of a clergyman, Cornelius Schalckius, and his wife Aletta Lydius, who came from a distinguished Dordrecht clerical family. In 1654 the family moved to Dordrecht, where Schalckius became Rector of the Latin School. According to Houbraken, Godfried was a good student of languages but preferred to paint. He studied with Rembrandt’s pupil Samuel van Hoogstraten (1627-1678) in Dordrecht from 1656-62 and with the fijnschilder genre painter Gerrit Dou (1613-1675) in Leiden, acquiring Dou’s exquisite delicacy of execution.

By 1675 Schalcken was back in Dordrecht, that year becoming ensign of a civic guard company. In 1679 he married Françoise van Diemen, daughter of a wealthy officer from Breda. He became Dordrecht’s most fashionable portrait painter and built up an international reputation for portraits and genre scenes by candlelight. Schalcken also painted Biblical and mythological subjects and portraits historiés, and made etchings. He attracted the attention of wealthy Court patrons at The Hague and in 1691 became a member of The Hague painters’ confraternity.

Schalcken spent 1692-8 in London specialising in portraits, including one of William III by candlelight (Rijksmuseum, Amsterdam). By 1698 he was back in The Hague. In 1703 Schalcken went to Düsseldorf to execute religious works for Johann Wilhelm, the Elector Palatine. He died in The Hague in 1706. Schalcken’s pupils include the portrait and genre painter Carel de Moor (1656-1738) and the candlelight painter Arnold Boonen (1669-1729), as well as his own sister and nephew.