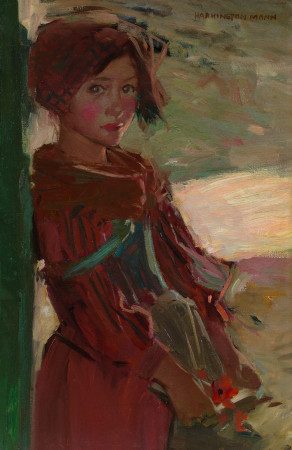 Harrington Mann established his reputation as a portrait painter of international fame, though he also painted landscapes, marine and historical subjects. His success and clientele in the United States was significant enough for him to maintain a house in New York as well as his native Britain. The son of a chartered accountant, Mann had an equally international education studying first at the Glasgow School of Art and continuing at The Slade School of Art in London from 1880 under the direction of Alphonse Legros (1837-1911). While a student at the Slade, Mann won an Travelling Scholarship which he spent in Italy from 1887-89, after which he visited Algiers, Tangier and Spain before further studies in Paris as the pupil of Gustave Boulanger (1824-1888) and Jules Joseph Lefevre at the Académie Julian. Mann returned to Glasgow[1] and worked as a designer for JW Guthrie (now Guthrie and Wells) during the 1890s, producing designs for stained glass windows at Trinity Church, Claremont Street in 1893. He also designed murals on the theme of Scottish Song for the Ewing Gilmour Institute for Girls at Alexandria in the Vale of Leven, Dunbartonshire, which housed the workers at the Turkey Red Dye Factory (c. 1888). Mann also drew illustrations for The Daily Graphic and The Scottish Art Review. The subject matter of his paintings at this time ranged from Yorkshire fisherman to large historical scenes such as The attack of the MacDonalds at Killiecrankie, 1689.

While associated with The Glasgow Boys in the 1880s (he was certainly good friends with John Lavery, whose portrait and that of his daughter Alice he painted), Mann was on the periphery rather than a full member. He was, however, a member of The Society of Eight[2]. In 1900, Harrington moved from Glasgow to London and began to concentrate on fashionable society portraits, including members of the Royal Family. He particularly excelled at painting children’s portraits. Having spent several profitable seasons in America, Mann began to divide his time between London and New York, setting up a second studio there in 1910. As well as writing an unpublished autobiography, Mann wrote a comprehensive guide to The Technique of Portrait Painting which was published in 1933.

[2] Formed in Edinburgh in 1912, the Society of Eight included P.W. Adam, David Alison, F.C.B. Cadell, James Cadenhead, James Paterson, John Sinclair and Sir John Lavery as well as Harrington Mann. William Hardie describes them as a group of ‘united artists who all tended to adopt a painterly approach and to use a light-keyed colour.’ W Hardie, Scottish Painting 1837-1939, Studio Vista, London, p. 100.