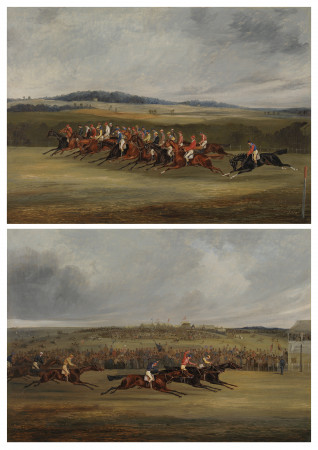 Henry Alken SeniorThe Start of the 1849 Derby ; The Finish of the1849 Derby

Henry Alken Snr was the most important member of the Alken family of painters.  He was of Danish ancestry, the son of Samuel Alken, and brother of George, Samuel Jnr and Sefferien John.  Of Henry Alken’s five children, Samuel Henry, known as Henry Alken Jnr, and Sefferien Jnr were also artists.

Henry Alken first studied with his father, and later trained with the miniaturist J T Barber, whose work influenced Alken’s handling of figures.  He exhibited two pictures at the Royal Academy in 1801 and 1802, both miniatures.  Following his marriage in 1809, Alken began a successful career as a graphic journalist, working under the pseudonym of ‘Ben Tally-Ho’.  In 1815 he visited Waterloo; his prints of the battle, as well as his portraits of Wellington, Blucher and the Marquis of Anglesey, were published by S and J Fuller the same year.

In 1816, Alken wrote and published The Beauties and Defects in the Figure of a Horse.  His other works as an illustrator included The National Sports of Great Britain, 1821, and the more famous Life and Death of John Mytton, 1837.

Alken painted hunting, racing and coaching scenes and a miscellany of other sports; many of these pictures were produced in pairs and sets.  Stylistically, he influenced both his own family of painters and many later sporting artists.