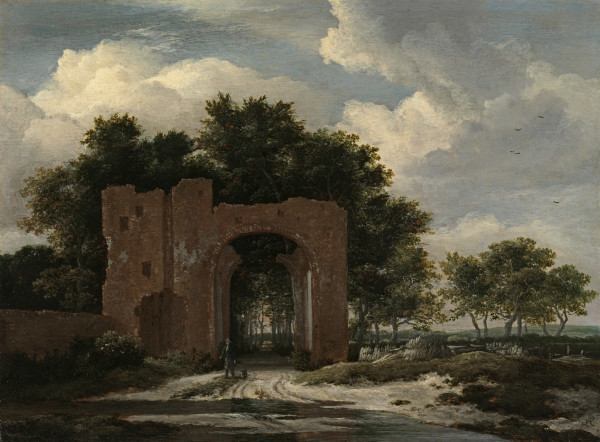 Jacob van Ruisdael was born in Haarlem in 1628/9, the son of the art dealer Isaack van Ruysdael and nephew of the landscape painter Salomon van Ruysdael (after 1603-1670). His first dated painting is from 1646; many paintings are dated between 1646 and 1653, but few thereafter. He joined the Haarlem Guild of St Luke in 1648; according to Houbraken, he also studied and practised medicine. Ruisdael’s early work was influenced by Salomon van Ruysdael and Cornelis Vroom.

Around 1650 Ruisdael travelled to Bentheim on the Dutch-German border with the painter Claes Berchem. In the mid-1650s he moved to Amsterdam, where he died unmarried in 1682.

Ruisdael was a painter, draughtsman and etcher in many categories of landscape. Following his early dunescapes, Ruisdael developed landscapes with large central motifs, such as oaks, ruins and watermills. Jan Porcellis and Simon de Vlieger influenced his marines. Later in his career he devoted himself to the depiction of waterfalls, panoramic landscapes, winter landscapes, beach scenes and city views. With their dynamic compositions, intense observation of natural phenomena and emphasis on untamed landscape, they are among the most powerful paintings of the seventeenth century.

Meindert Hobbema was Ruisdael’s most important pupil; he had many other followers, including Cornelis Decker, Jan van Kessel and Adriaen Verboom.