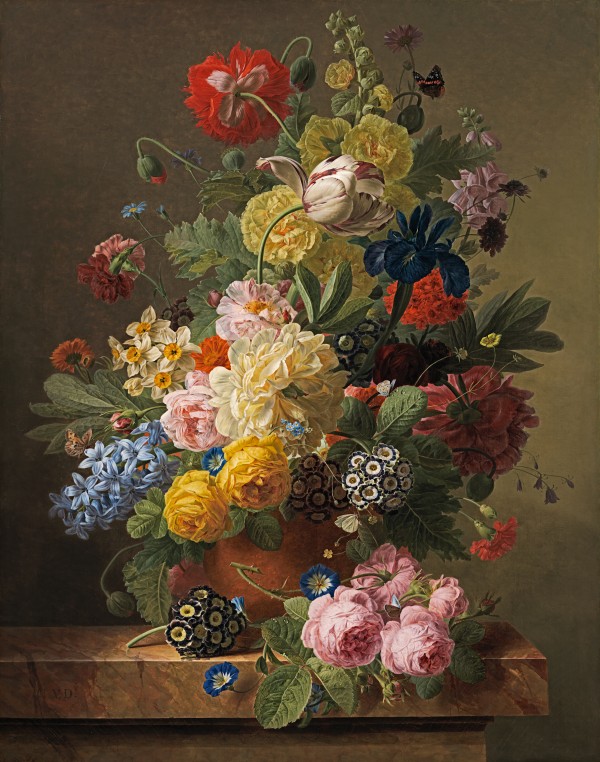 Jan Frans van DaelStill life of poppies, a tulip, hollyhocks, roses, peonies, auriculas and other flowers in a terracotta vase on a stone ledge

Jan Frans van Dael, with Redouté and the Spaendonck brothers, ranks among the most important flower painters of the second half of the eighteenth and the first half of the nineteenth century. All of them were born in the Low Counties and spent successful careers in Paris. Van Dael was born in Antwerp in 1764, the son of a joiner. From 1776 he studied architectural draughtsmanship at the Antwerp Academy, but preferred to paint, which he did secretly at night to avoid his father’s disapproval.

In 1786 van Dael left for Paris and was employed on decorative schemes for the châteaux of St Cloud, Bellevue and Chantilly. He soon turned to flower painting, influenced by Gerard van Spaendonck, with whom he probably studied. Van Dael’s delicate and precise paintings soon gained important patrons and he was unscathed by the turbulent politics of the era. In his long career, van Dael worked for the Empress Josephine at Malmaison; for the Empress Marie-Louise, Louis XVIII and Charles X. He exhibited at the Paris Salon 1793-1833 and from 1796 had apartments in the Louvre, moving to the Sorbonne in 1806.

Van Dael was a member of the Academies of Antwerp and Amsterdam and exhibited in Antwerp, Ghent, Brussels and The Hague. He amassed an important collection of contemporary and seventeenth century Dutch and Flemish still lifes, for he regarded himself as an heir of that great tradition. Van Dael’s exquisitely painted flowers were based on botanical study, and according to a fellow botanist, van Hulthem, he grew flowers in his garden to serve as models.

Van Dael also made a few pure landscapes, religious and allegorical pictures, as well as lithographs. He occasionally painted portraits, often of fellow artists. Jan Frans van Dael died in Paris in 1840 and was buried in Père-Lachaise next to his mentor Gerard van Spaendonck.