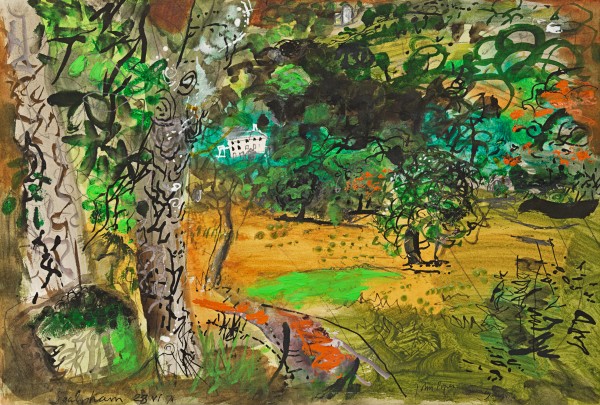 John Egerton Christmas Piper was born at Epsom in 1903, the son of a solicitor.  Educated at Epsom College, Piper joined the family firm as an articled clerk until his father’s death in 1925.  In 1926, having abandoned the study of law, he attended Richmond School of Art, transferring to the Royal College of Art, South Kensington in 1927.  Though regarded foremost as a painter (elected a member of the Seven and Five Society in 1934), Piper was also a set designer for ballet and opera productions and for stained glass windows, as well as being an art and theatre critic.  He was also a masterful topographical draftsman with a passion for architecture, nurtured by his close personal and professional relationship with John Betjeman, with whom he collaborated on the Shell Guides to the British Isles.

He was a valued member of the Royal Fine Art Commission for nineteen years, as well as a trustee of both the National and Tate Galleries.  Piper met and became close friends with Benjamin Britten through writing for the Architectural Review, and worked with him on several musical productions.  His first contact with the stage was in the 1930s with the Group Theatre Company.  In 1937 he divorced his first wife Eileen Holding and married Myfanwy Evans.

Piper volunteered for the RAF in 1940, but was instead commissioned by the War Artist’s Advisory Committee and was appointed Official War Artist in 1944.

The work of John Egerton Christmas Piper is represented in Bolton Art Gallery, the National Museums and Galleries of Wales and Tate Britain, London.