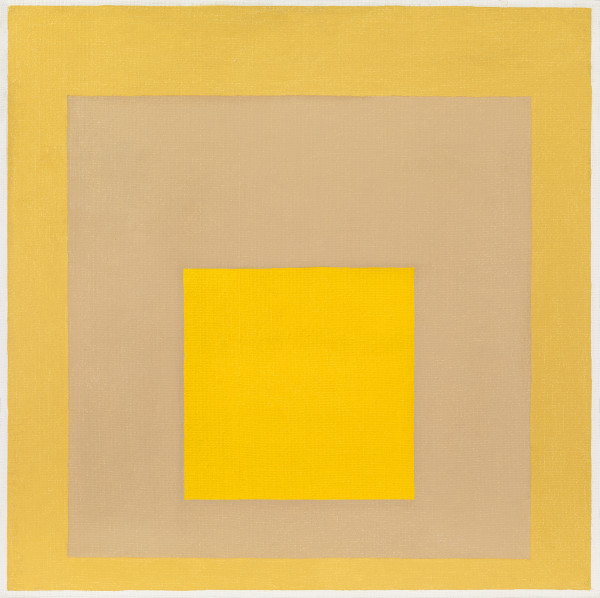 Josef AlbersStudy for Homage to the Square: Mellow

From his early days as a student at the Bauhaus in Germany, where he subsequently taught foundation courses in both Colour and Preliminary Design, Josef Albers was fascinated by the interaction of colours.  After immigrating to America with his wife Anni in 1933 he became an art teacher at the ground-breaking Black Mountain College in North Carolina and in 1950 he became Head of the Department of Design at Yale University where he taught Willem de Kooning, Robert Rauschenberg and Robert Motherwell and where he continued to pursue his exhaustive explorations of the theory of colour.  An artistic pioneer, Albers’ ground-breaking approach to colour and form led to the development of both ‘Hard-edge painting’ - which used straight, clean linear patterns to create a three dimensional effect on a two dimensional surface and ‘Op-Art’ - which relied mainly on mathematics and colour theories to achieve dramatic effects.   Both movements were considered a reaction against the subjective emotionalism of abstract expressionism which had dominated US art in the 1950s.

Begun in 1949 ‘Homage to the Square’ is Albers most famous series, he devoted the next twenty six years to producing more than a thousand works that included paintings, drawings, prints and tapestries.  The series provided an in depth exploration of chromatic relationship between several concentric squares of colour by examining the effects that adjacent colours have on one another when processed by the human eye and the optical illusions created by flat planes of colour advancing or receding in space.  With its rigid, mathematical elements the square provided an ideal format for Albers’ experiments, applying the pigment with a palette knife directly from the tube the artist was fascinated by what he called ‘the interaction of colour’ whereby the central square, lying between the inner and outer squares, would subtly take on the hue of the neighbouring square. In Homage to the Square: Recurring Theme the bright, golden tones of the three squares present an optical progression that encourages the eye to move outward from the centre of the composition registering a variety of tones and colours.

In 1972 Josef Albers oversaw the publication of a review of work entitled Formulation: Articulation.  In the introduction the author and curator Gerald Nordland wrote ‘The purpose of his colour studies was to prove that colour is the most relative medium in art, and that we almost never perceive what colour is physically.  He called the mutual influencing of colours interaction.  He taught us that our optical reception can be turned inside out, so that we see opaque colours as transparent, and perceive opacity as translucence.  Albers compelled his students to learn to see again, and to be questioning of their vision.  He pointed out that colour offers uncertainties and "perceptual ambiguities" where three colours can be made to look like four or like two, by changing their colour environments.  "Each colour has different properties both as colour and as buttery paste.  Each has a different density; in spite of this, I want them all to behave; to do what I want and not what they want... One must taste and taste in order to cook just right... Until one has the experience of knowing he is being fooled by colour, one cannot be expected to be very careful to look at things inquiringly.  Only comparison entitles one to evaluation... I want to imbue others with my delight in the endless possibilities for new colour experiences." ‘(Josef Albers Formulation: Articulation, New York, 1972).