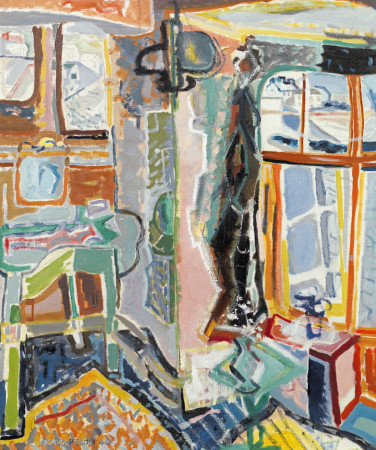 Although Heron was born at Headingly, Leeds, much of his childhood was spent in West Cornwall. His father was a blouse manufacturer and founder of Cresta Silks, commissioning artists including Paul Nash and Cedric Morris. Heron studied part-time at the Slade School of Art between 1937-39. During the Second World War, he registered as a conscientious objector, working as an agricultural labourer and later as an assistant at the Bernard Leach Pottery, St Ives from 1944-45, during which time he met Ben Nicholson and Barbara Hepworth. In 1945, Heron married Delia Reiss and moved to London, making annual summer trips to Cornwall. He held his first solo exhibition at the Redfern Gallery in 1947 (and continued to exhibit with the gallery until 1958), visiting Paris for the first time the same year. During this period Heron was also an influential art critic, writing for the New English Weekly from 1945-47, New Statesman and Nation from 1947-50, the London correspondent for Arts, New York, from 1955-58, and published an anthology of his critical writing, Changing Forms of Art in 1955.

Heron painted his first purely abstract paintings in 1952 and after a brief return to figuration, executed works in a tachiste style from 1955, prior to the exhibition Modern Art in the United States at the Tate Gallery in 1956. This change to abstraction coincided with his move to Eagles Nest, Zennor, and the following year he exhibited his first stripe paintings in a group exhibition entitled Metavisual, Tachiste, Abstract. In 1958, he moved to Ben Nicholson’s former studio at Porthmeor and began to introduce the shapes that were to characterise his paintings of the 1960s and 1970s. He also joined Waddington Galleries, where he would exhibit for the rest of his career. Heron visited Australia in 1967, 1973 and in 1989-90, as Artist in Residence at the Art Gallery of New South Wales, Sydney.