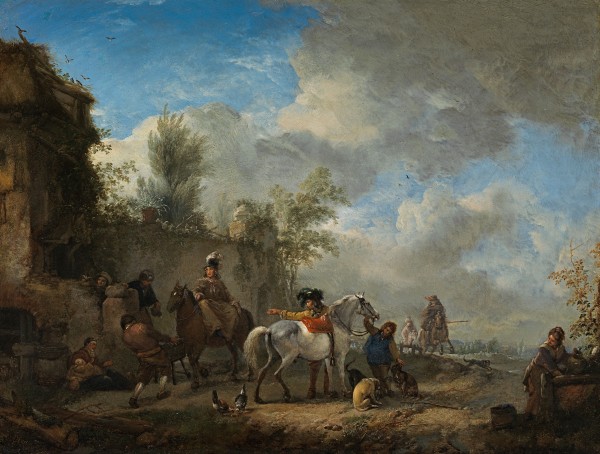 Philips WouwermanElegant couple before an inn

Philips Wouwerman specialised in Italianate landscapes with horses and figures, riding schools, hunts and battle scenes. He also painted religious and mythological subjects. Wouwerman was a prolific painter who enjoyed considerable acclaim during his lifetime and his works were avidly sought after by aristocratic collectors in the eighteenth and nineteenth centuries.

Wouwerman was born in Haarlem in 1619, the eldest son of Pauwels Joostens Wouwerman (c.1580-1642), a painter from Alkmaar. He received his earliest instruction from his father and probably studied with Frans Hals. His early works were considerably influenced by two Haarlem painters, Pieter Verbeeck (c.1610-c.1654) and Pieter van Laer (Il Bamboccio) (1599-c.1642), who had returned from Italy in 1639.

Wouwerman went to Hamburg circa 1638 in order as a Protestant to be able to marry a Catholic, Annetje Pietersz. van Broeckhof, allegedly against his father’s wishes. During this period he is reputed to have worked in the studio of the German history painter Evert Decker (d.1647). He returned to Haarlem, joined the Guild of St Luke in 1640, and was elected Vinder (Commissioner) in 1646. From 1642 to 1655 Wouwerman was a member of the militia company of Sint Joris. Unlike many Dutch artists of the seventeenth century, there is no documentary evidence that Wouwerman ever travelled to southern Europe, although in accordance with the fashion of the day Italianate landscape and architecture feature in many of his finest paintings.

Wouwerman’s work of the 1640s, influenced by Pieter van Laer, has a warm brown tonality. The following decade he changed to a light, silvery tone. Wouwerman’s staffage becomes richer and more elegant as his career progresses; some of his very late work returns to a more subdued palette. Wouwerman prospered from his career and was a pillar of the community in Haarlem; he speculated in property and was able to provide well for his ten children. The artist died on 19th May 1668 and was buried in the Nieuwe Kerk in Haarlem. His younger brothers Pieter (1623-1682) and Johannes (1629-1666) emulated his style; he also had a number of pupils, including Nicolaes Ficke (c.1620-1702) and Anthony de Haen (1640-before 1675).

The work of Philips Wouwerman is represented in the Rijksmuseum, Amsterdam; the Staatsgalerie, Schleissheim; the Louvre, Paris; The Hermitage, St Petersburg; the National Gallery, London; the Prado, Madrid; the Liechtenstein Museum, Vienna; the Metropolitan Museum of Art, New York; the Museum of Fine Arts, Boston; Cleveland Museum of Art and the Minneapolis Institute of Arts.