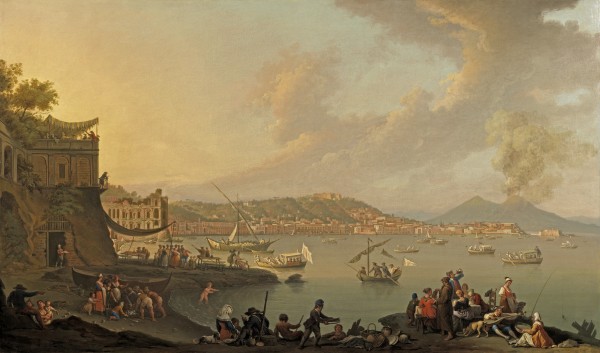 Pietro Fabris is said to have been English and sometimes added the phrase ‘English painter’ to his signature. He specialised in Neapolitan genre scenes and landscapes with pure, bright colours that capture the intense Mediterranean light. Fabris’s earliest dated paintings are the four Scenes of popular life, 1756-7, in a Neapolitan private collection. He depicted Court events, such as The departure of Charles III of Bourbon for Spain, 1759 (c.1759; Palacio Real, Aranjuez) and panoramas of the Bay of Naples with folkloric scenes in the foreground, for example peasants feasting and dancing the tarantella. The contrast between the grandeur of the city’s architecture and the impoverished but vibrant life of its lazzaroni accorded with the myth of ‘miseria e nobiltà’ that fascinated visitors to Naples.

Fabris enjoyed royal commissions, including Ferdinand IV after a boar hunt, 1773 (Palazzo Reale, Caserta), but was also popular with Grand Tourists and expatriots domiciled in the city. Among his most important patrons were the British envoy Sir William Hamilton (1731-1803) and his friend Kenneth Mackenzie, Lord Fortrose and later 1st Earl of Seaforth (1744-1781). The concert party, 1770 (Scottish National Gallery, Edinburgh) shows the interior of Fortrose’s apartment in Naples with Sir William Hamilton playing the violin and the fourteen-year-old Mozart and his father Leopold seated at the keyboard.

In 1768 Fabris exhibited two oil paintings of Posillipo at the Free Society and accompanied Sir William Hamilton to Sicily. In 1769 Hamilton sent two of his works to George III. Fabris exhibited at the Society of Artists in 1772. He was one of the first artists in Naples to use gouache, providing fifty-eight gouaches which were engraved and hand-coloured to illustrate Hamilton’s Campi Phlegraei (1776; supplement 1779). They range from landscape views to scientific illustrations of volcanic materials. Fabris’s date of death is unknown, but he is last mentioned by a Grand Tourist in 1784.

The work of Pietro Fabris is represented in the Palazzo Real, Aranjuez; the Palazzo Reale, Caserta; the Scottish National Gallery, Edinburgh; the British Royal Collection; Compton Verney, Warwick and the Courtauld Institute of Art, London.