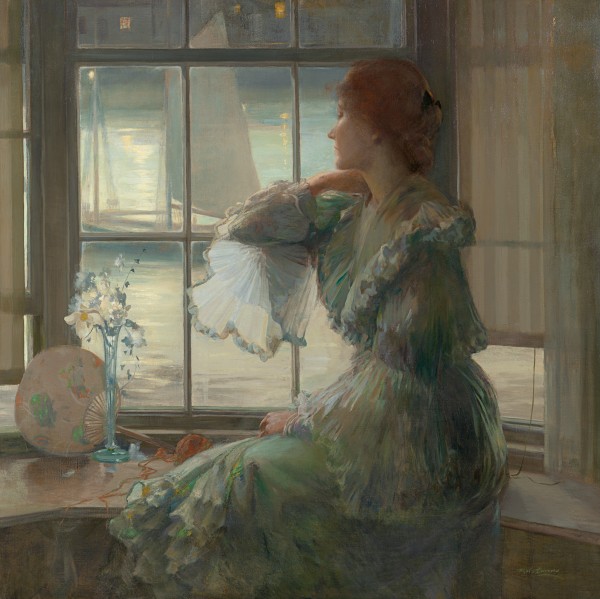 The son of an early landscape photographer, Archibald Burns, Robert was born and brought up in Rock House, Edinburgh, previously the studio of the artist David Octavius Hill (1802-1870).

Tragically, both his parents died before he reached the age of sixteen, at which time he moved to live with his grandfather in Glasgow. A talented draughtsman, Burns was awarded a drawing prize at Glasgow Technical College while studying to be an engineer during the day. In the evenings, he attended Glasgow School of Art along with Charles Rennie Mackintosh. In 1889 he left Glasgow for London and briefly enrolled as a student at Professor Fred Brown’s School, Westminster before travelling to Paris the same year to study at the Académie Delécluse.  He also married fellow Glasgow School of Art student, Catherine Craig in 1889. In Paris, Burns discovered Japanese art and purchased a large collection of prints which had an immediate impact on his work.[1] He also spent time studying works by Titian and Giorgione in the Louvre which would later inform his romantic paintings of Scots ballads. Burns superbly combined the influence of Japonisme with his Glasgow style to create one of the earliest examples of Art Nouveau in Scotland in his illustration, Natura Naturans, 1891, published in Sir Patrick Geddes journal The Evergreen. He also contributed to Ver Sacrum, the journal of the Vienna Secession.

Burns returned to Edinburgh in 1892 and started to exhibit at the Scottish Academy. In 1901 he was elected President of the Society of Scottish Artists and an Associate member of the Royal Scottish Academy the following year (although he resigned in 1920). Burns taught colour for seven years at the Academy Schools, but, as demonstrated by his resignation, felt a much stronger affinity for the Society of Scottish Artists, which exhibited applied art in addition to painting. Burns designed most of the advertising for the Society as well as the cover of their catalogue. He became the first Head of Drawing and Painting at Edinburgh College of Art from 1908-1919 and proved an influential teacher, his students including Anne Redpath (1895-1965). Burns frequently visited the artistic community in Kirkcudbright and encouraged other artists to paint and settle there. From 1920 landscape painting became a prevailing interest with views of Kirkcudbright and Iona in oil and more than seventy watercolours following a three month trip to Morocco in 1921, which Burns exhibited at the Leicester Galleries, London, upon his return.

During the last twenty years of his life, Burns returned with passion to applied art, having already produced designs for iron and silversmiths’ works, stained glass windows such as the Presentation in the Temple at St Mary, Bellevue Crescent and murals at St David’s Roman Catholic Church at Dalkeith and Darling’s Shop in Edinburgh (now demolished). Perhaps his most famous designs were for Crawford’s Tea Rooms in Princes Street, Edinburgh.[2] Burns had already worked as a label designer for the Liverpool biscuit manufacturer, William Crawford, when the firm commissioned him to design and organise the interiors of their Edinburgh restaurant on Princes and Hanover Streets, from decorative panels to cake stands. Burns even designed furniture made by the celebrated firm Whytock and Reid. The project was a huge public and critical success when completed in 1927.

Burns suffered a series of strokes from 1929 and was confined to bed, but continued to work designing illustrations in colour and black and white, which with the help of his friend the publisher, Alexander Hunter Crawford, became four books, two of which were published: The House that Jack Built, 1937 and Scots Ballads by Robert Burns, Limner, 1939, the latter highly praised by fellow artists George Clausen and his friend Stanley Cursiter.

The work of Robert Burns is represented in the Scottish National Gallery, the City of Edinburgh Council and the Royal Scottish Academy of Art & Architecture, Edinburgh as well as the Walker Art Gallery, National Museums Liverpool.

[2] The oil on tempera mural Diana and her Nymphs is in the Scottish National Gallery, Edinburgh. Nine oil on board panels are on long term loan to the RSA, Royal Scottish Academy of Art & Architecture, Edinburgh.