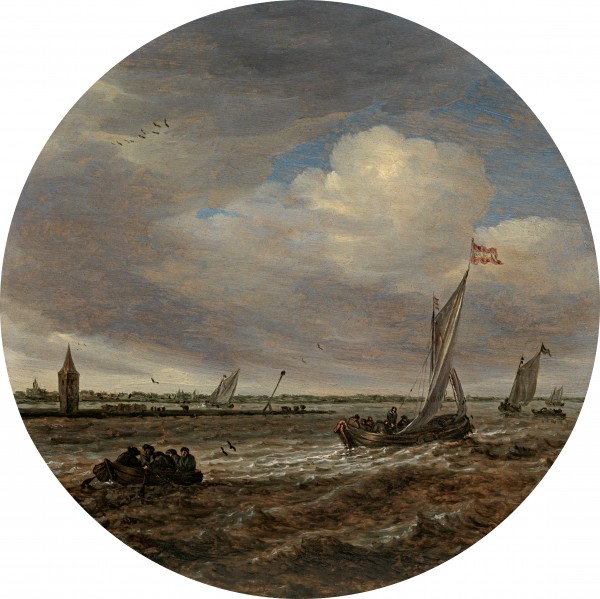 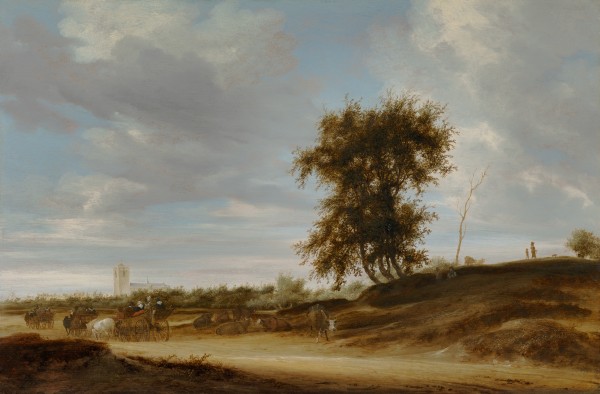 Salomon van RuysdaelLandscape with wagons on a sandy road 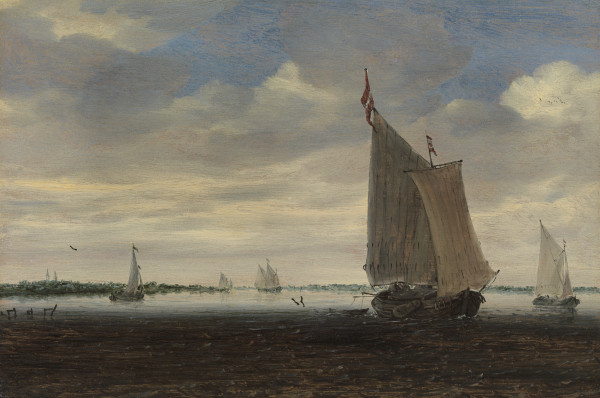 Salomon van RuysdaelA wijdschip and other small Dutch vessels on an estuary, with a church in the distance

Salomon Jacobsz. van Ruysdael was born in Naarden in Gooiland. He was originally called Salomon de Gooyer (Goyer), but he and his brother Isaack (1599 – 1677), who was also an artist, supposedly adopted the name Ruysdael from Castle Ruisdael (or Ruisschendaal), near their father’s hometown. Salomon spelled his name Ruysdael (or occasionally Ruyesdael) as distinguished from his gifted nephew, the landscapist Jacob van Ruisdael (1628/29 – 1682). In 1623 Salomon entered the painters’ guild in Haarlem (as Salomon de Gooyer). He was named a vinder of the guild in 1647, a deacon the following year, and a vinder again in 1669. His earliest dated painting is of 1626 and he was praised as a landscapist as early as 1628 by the chronicler of Haarlem, Samuel Ampzing. He was called a merchant in 1631 and dealt in blue dye for Haarlem’s bleacheries. His wife, Mayken Buysse, was buried in St Bavo’s Church on 25th January 1660. Like his father, Salomon was a Mennonite and in 1669 was listed among the members of the “Vereenigde Vlaamsche, Hooghduitsche en Friesche Gemeente” when he was living in the Kleyne Houtstraat. As a Mennonite he could not bear arms but contributed to Haarlem’s civic guard. Although Salomon seems to have lived in Haarlem his entire life, he made several trips through the Netherlands, making views of, among other places, Leiden, Utrecht, Amersfoort, Arnhem, Alkmaar, Rhenen and Dordrecht. The artist was buried in Haarlem in St Bavo’s on November 3, 1670.

Although Salomon’s teacher is unknown, his early works of c. 1626 – 1629 recall the art of Esaias van de Velde (1587 – 1630), who worked in Haarlem from 1609 – 1618. In addition to Van de Velde’s influence, these early works reveal many parallels with the art of Jan van Goyen (1596 – 1656). Together with Van Goyen, Pieter de Molijn (1595 – 1661), and Pieter van Santvoort (1604/05 – 1635), Salomon was one of the early “tonalist” landscapists of his generation and the artists seem to have had a mutual influence upon one another. These artists laid the foundation for the “classical” period that followed, and which was brought to fruition by Salomon’s nephew, Jacob. In addition to landscapes, numerous river views and seascapes with calm, never stormy waters, Salomon executed a few still lifes in his later years. Salomon was the father of Jacob Salomonsz. van Ruysdael (c.1629/30 – 1681), who also became a landscapist.