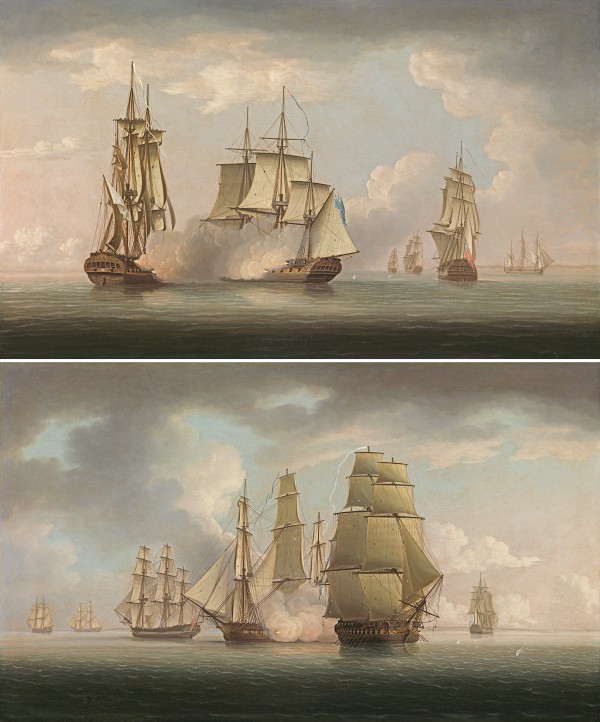 Thomas Buttersworth was born in the Isle of Wight on 5th May 1768. He enlisted aboard His Majesty’s Receiving Ship Enterprise, moored off the Tower, on 17th August 1795. On 19th August he joined the Caroline, a new frigate fitting out for sea at Deptford, and was rated an able seaman at the age of twenty-seven. In November 1796 he was appointed a master-at-arms, and in 1800 a midshipman, a promotion that could have led to an officer’s commission had Buttersworth not been invalided out of the Navy at Minorca that year and sent home.

Buttersworth began painting while still a seaman. A number of paintings of the Battle of St Vincent, 1797, and of the subsequent inshore blockading squadron off Cadiz, suggest that he was present at Nelson’s first major victory. Other Mediterranean subjects are dated 1797, 1799 and 1800, when Buttersworth was still in the Service. After returning to London, he became a professional and prolific marine painter, his knowledge of Naval life and ships giving particular verisimilitude to his work. He was appointed Marine Painter to the East India Company.

Buttersworth exhibited only one painting at the Royal Academy, The Ville de Paris off the Tagus, 1813 (when he was living in Kennington, London), and one at the British Institution, The Battle of Trafalgar, 1825 (from an address in Trafalgar Street, Walworth). He painted fleet actions, single ship actions, ship portraits and general shipping scenes in both oil and watercolour. His pupil was his son James Edward Buttersworth (1817-1894), who emigrated to New York around 1845 and became one of the most celebrated of America’s marine painters. Thomas Buttersworth died in London in 1842.

The work of Thomas Buttersworth is represented in the National Maritime Museum, Greenwich; the City Art Gallery, Plymouth; the US Naval Academy Museum, Annapolis, MD; the Peabody Museum of Salem, MA; the Mariners’ Museum, Newport News, VA and the Library of New South Wales, Sydney.