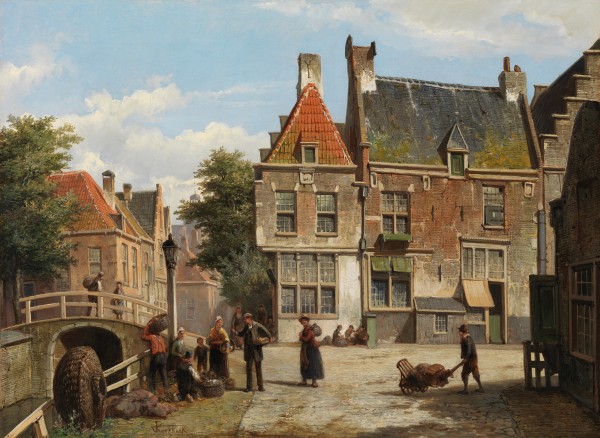 Willem Koekkoek was the second son of the marine artist Hermanus Koekkoek, Senior (1815 – 1882), but unlike his father he specialised in townscapes peopled with figures painted during summer and winter. These included imaginary streets and specific towns such as Gouda, Enkhuizen, Ijsselstein, Breda and Bruges.

Born in Amsterdam in 1839, Willem trained with his father and then travelled extensively in Holland, living at the Hague in 1878, Amsterdam in 1880 and Nieuwer-Amstel from 1885 onwards; he is also recorded as visiting London in 1888. He exhibited at Leeuwarden in 1859 and in Amsterdam, the Hague and Rotterdam between 1865 and 1894. He died at Nieuwer-Amstel, south of Amsterdam, in 1895.

The work of Willem Koekkoek is represented in the Amsterdam Museum and the Toneelmuseum, Amsterdam; the National Gallery, London; the Philadelphia Museum of Art and the Museum of Fine Arts, Montreal.