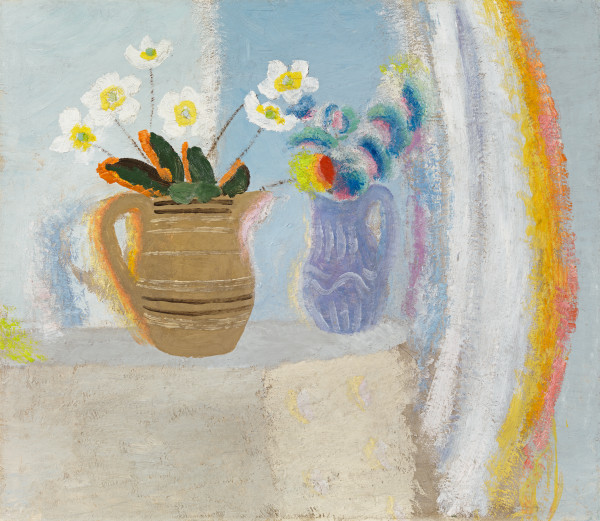 A painter of colourful, lively figurative paintings, still lives and landscapes, Winifred Nicholson was a quintessentially British painter.  After studying at the Byam Shaw School of Art in London she first exhibited at the Royal Academy in 1914 under her maiden name Winifred Roberts, she then travelled extensively studying in Paris, Lugano and India.  In 1920 she met and married Ben Nicholson, the son of the distinguished artist, Sir William Nicholson and she continued to exhibit widely both on her own and with her husband.  A member of the Seven and Five Society and the New English Art Club she also exhibited abstract works under the name Winifred Dacre at the London Gallery in 1937.  In 1931 she separated from Ben Nicholson and moved to Paris where she lived until 1938 when she returned to live at Brampton in Cumbria near Hadrian’s Wall.  Works by Winifred Nicholson can be seen in many public collections including Tate Britain.

Best known for her vibrant flower paintings she once wrote ‘when one is young one is satisfied with a flower petal or a sparkle.  Now I want more.  I want the rainbow scale of the flower and the reason and the travel of the sparkle’.