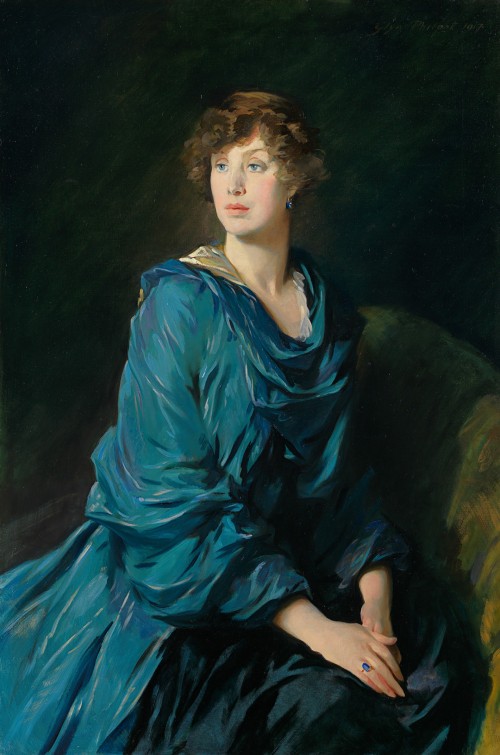 In a carved and gilded swept frame

Commissioned by the Marquess of Crewe in 1917;

by descent to his daughter Mary, Duchess of Roxburghe (1915-2014), West Horsley Place, Surrey;

by inheritance to her great-nephew Bamber Gascoigne

‘An Inventory….of Pictures at West Horsley Place, Surrey, The Property of the Marquess of Crewe’, 1938, p.9

By 1917, when this painting was made, Glyn Philpot was an ARA and had a flourishing career as a Society portraitist. He combined realism and psychological subtlety with bravura brushwork derived from a love of the Old Masters, particularly Titian and Velázquez, which he studied in the museums of Italy and Spain. This portrait is all the more effective for its restraint. The sitter emerges from a dark background, focussing all the attention on her face, with her heavy-lidded, intense blue eyes, and her elegant hands. Her dress is a cascade of blue silk, unfussily timeless.

In painting Margaret (always known as Peggy) Crewe-Milnes, Marchioness of Crewe, Philpot was matching himself against the family portraits of one of the grandest lineages in the land. Margaret was the second daughter of Archibald Primrose, 5th Earl of Rosebery (1847-1929) and the heiress Hannah de Rothschild (1851-1890), granddaughter of Nathan Mayer Rothschild, founder of the English branch of the Rothschild bank. At the time of her marriage in 1874, Hannah was the wealthiest woman in England; her handsome, brilliant husband the owner of 21,000 acres of Scotland. The family moved between their Scottish seat, the Gothic Revival Dalmeny House, near Edinburgh; The Durdans, near Epsom and the vast, Neo-Renaissance Rothschild mansion, Mentmore in Buckinghamshire. The Roseberys, both keen connoisseurs, added greatly to the art treasures. Lady Rosebery was painted by Lord Leighton and her two young daughters, Lady Sibyl and Lady Margaret Primrose, by John Everett Millais.

Lord Rosebery was Foreign Secretary in 1886 and Liberal Prime Minister from 1894-5. A keen racing man since his undergraduate years (he was sent down from Cambridge for owning a racehorse), he rivalled his political success in the 1890s by owning the Derby winners of 1894 and 1895, Ladas II and Sir Visto. He won again with Cicero in 1905.

In 1899 the eighteen-year-old Lady Margaret married her father’s colleague, Robert Crewe-Milnes, Earl of Crewe (1858-1945). Crewe was a widower with three daughters, the eldest of whom was almost the same age as the bride. The magnificent ceremony took place at Westminster Abbey, before six hundred guests, including the Prince of Wales (the future Edward VII). Margaret was attended by ten bridesmaids. As the Boston Evening Transcript reported, ‘The bride’s gown was of richest ivory satin duchesse, embroidered with wreaths, bouquets and diamond primroses and draped with point d’Alençon lace, formerly the property of Queen Marie-Antoinette of France’.

A solid administrator rather than a dazzling orator, Crewe was Secretary of State for India in 1910-11 and 1911-15. He masterminded the glorious Delhi Durbar (or Court) attended by George V and Queen Mary and moved the capital of India from Calcutta to Delhi, commissioning Sir Edwin Lutyens to design New Delhi on an imperial scale. Crewe was created Marquess of Crewe in 1911 and served as British Ambassador to France from 1922 to 1928.

Like her mother before her, Margaret was an astute and witty political hostess, entertaining at Crewe House in Curzon Street, London and the lovely, Jacobean Crewe Hall in Cheshire. Winston Churchill first met his future wife Clementine Hozier at a party at Crewe House in 1904. Brought up with a strong sense of philanthropy and duty, in 1920 Margaret became one of the first female magistrates in Britain. The Crewes had two children, Richard, Earl of Madeley (1911-1922) and Lady Mary Crewe-Milnes (1915-2014), who married the 9th Duke of Roxburghe. Philpot’s portrait of her mother hung until recently at West Horsley Place, Surrey, which the Duchess inherited in 1967.

Glyn Philpot studied at Lambeth Art School with Philip Connard and in 1906 with Jean-Paul Laurens at the Académie Julian in Paris. He was influenced by Charles Ricketts and Charles Shannon but especially by studying the Old Masters, particularly Titian. He was brilliant at building up a picture with successive glazes over underpainting.

In 1906 Philpot converted to Catholicism, to the consternation of his Baptist family. In 1908 he travelled to Spain and the following year painted Manuelito, which made his reputation. Philpot’s painterly brushwork, striking compositions and air of Old Masterly gravitas gained him a comfortable living as a Society portraitist. At the same time, he made many figure studies and painted classical and religious subjects. The dog rose (La zarzarrosa), 1910-11 (Fitzwilliam Museum, Cambridge), a depiction of a dancer resting backstage, painted with Velázquez-like brio, was a great critical success. It was bought by a member of the Mond family, who became major patrons. Philpot’s increasing prosperity allowed him to make his first visit to Italy and many more trips to Paris. In 1913 Philpot won a gold medal at the Carnegie International Exhibition in Pittsburgh. Unfit for active service in the First World War, he became a war artist, painting portraits of admirals.

Philpot was elected ARA in 1915 and RA in 1923. In 1927 he bought a house at Baynards, Sussex, where he made the large bronze Oedipus replying to the Sphinx. In 1930 Philpot was a member of the jury (along with Matisse) for the Carnegie International Exhibition. From 1931 to 1935 he maintained a studio in Paris, where he initially concentrated on sculpture. In the 1930s Philipot was influenced by currents of international Modernism, including the work of Gaudier-Brzeska, Picasso and the Neue Sachlichkeit. He radically changed his style, abandoning the use of glazes in favour of a dryer, direct touch, palette of chalky brightness and simplified outlines in works such as Melancholy negro, 1936 (Royal Pavilion, Brighton) and the elegant portrait of his friend and protegé Vivian Forbes, 1936 (private collection). Philpot produced complex, mystical subject pictures in this new style, including the erotic The Great Pan, 1933 (destroyed), which was banned from the Royal Academy exhibition, to the glee of the press. From 1935 to 1937 Philpot painted watercolours in North Africa and the South of France, which were exhibited at the Syrie Maugham Gallery (1935) and the Redfern Gallery (1937).