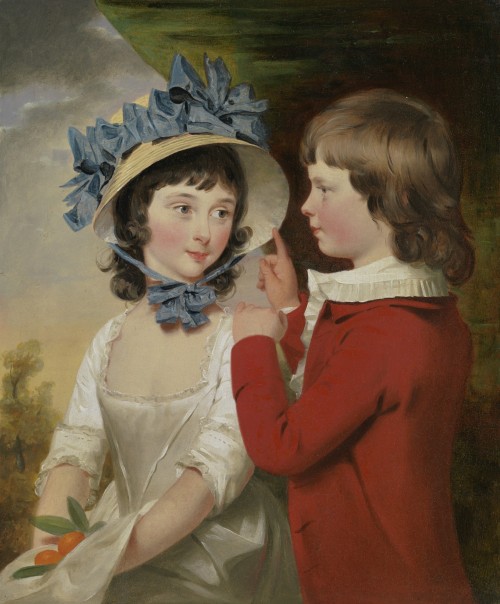 Portrait of William and Isabella Way of Denham Place, Buckinghamshire

Portraits of William and Isabella Way of Denham Place, Buckinghamshire

the Estate of Mrs Paul Mellon

John Downman is now best known for his small, oval portraits in black chalk and stump, drawn on very thin paper and tinted with watercolour on the reverse to give the effect of translucent skin tones. In the earlier part of his career, however, he often worked in oil on panel or copper. This superbly preserved double portrait reflects the economy and classical delicacy of line which Downman had developed after studying in Rome in the company of Joseph Wright of Derby from 1773-4. It also shows the sympathy and humanity which he brought to portraits of children. Downman excelled at the double-portrait format, here bringing a touching sense of familial affection. Isabella looks tenderly at her young brother as he holds forth on some enthusiasm.

The sitters were the children of Benjamin Way, Esq. (1740-1808) of Denham House, Buckinghamshire, and his wife Elizabeth Anne Cooke (1746-1825), daughter of William Cooke, Provost of King’s College, Cambridge. Downman lived in Cambridge in the mid-1770s and many of his sitters had connections with that city. The Ways had seven sons and nine daughters; Isabella was the eldest daughter, William the third son. Benjamin Way was the son of Lewis Way, a Director of the South Sea Company, and himself became a Sub-Governor of the Company and a Fellow of the Royal Society. He had a brief political career as MP for Bridport (where the family had property and connections) from 1765-8.

In 1804 Downman was living in West Malling, Kent, where he had relatives; he was a keen naturalist and made studies of animals and birds. By 1806 he had moved to Devon, where he married a daughter of the well known Exeter organist and composer William Jackson. His later years were spent in constant travel to fulfil commissions, for example to Alnwick, Northumberland, to portray Hugh, Lord Percy, son of the Duke of Northumberland. In 1818, with the decline of demand for his work, he settled in Chester; he died at his daughter’s house in Wrexham in 1824.

[2] The parents’ portraits were framed separately and did not enter the Fitzwilliam collections. See Williamson, op. cit., p.lxi, no.285 (Mrs Way) and p.lxii, no.302 (Mr Way).