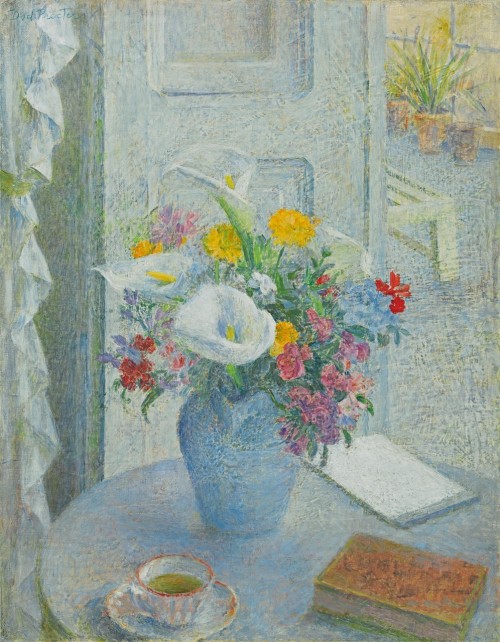 In 1927 Dod Procter created a sensation with her painting Morning, a portrait of Cissie Barnes, the daughter of a Newlyn fisherman. It was voted Picture of the Year at the Royal Academy in 1927, bought by the Daily Mail and donated to the Tate Gallery.

By the 1930s Dod had changed from the spare, hard-edged manner of her 20s works into a softer style, reminiscent of Renoir and the Post-Impressionist painters that she had admired as a student at the Atelier Colarossi in 1910. Flowers were a favourite theme. She created a haven in North Corner, Newlyn, the fisherman’s cottage which she shared with her painter husband Ernest Procter (1885-1935). ‘Dod’s creativity affected every aspect of her life, from the immaculate way in which she dressed to the way she organised her house and garden. The latter was a source of pleasure and she spent many happy hours creating a magical garden with Ernest’[1].

After Ernest’s death in 1935, Dod travelled widely in Europe, Africa and the West Indies, while keeping her Cornish base. The French window is a fruit of her trip to Tenerife in 1938; she went there again in 1946, with the painter Jeanne du Maurier, sister of the novelist Daphne. The shimmering light is achieved by painting on a white ground with flickering, cross-hatched strokes given texture by scratching into wet paint with the wooden tip of the brush handle. The flowers seem artless but are exquisitely arranged so that the bold, curving shapes of the arum lilies are juxtaposed with many-petalled blooms. Dod would spend hours selecting species for just the right tone and impact[2]. The bold colours of this bouquet – red, yellow, purple-pink – emerge from an interior pulsating with blue shadows, suggesting the cool of early morning.

The complex interior scene, with a glimpse beyond the conservatory into the dazzle of the garden beyond, and the celebration of quiet domesticity, give this painting parallels with work of Henri le Sidaner (1862-1939) and Pierre Bonnard (1867-1947). As in the paintings of le Sidaner, the cup of tea on the table implies a human presence just offstage. The fluted, red-edged cup in The French window was part of a set brought back by Dod from Tenerife. It appears in other of her paintings, including Flowers on the dresser for Jennifer (private collection) and The red bag (private collection).

Dod Procter was born Doris Margaret Shaw in Hampstead, the daughter of a ship’s doctor. Her mother had studied at the Slade School of Art. In 1907 the widowed Mrs Shaw moved the family to Newlyn in Cornwall, where the fifteen-year-old Dod enrolled in Stanhope Forbes’s School of Painting. She was considered a star pupil, along with Ernest Procter (1885-1935), whom she was to marry in 1912. In 1910 Dod and Ernest studied at the Atelier Colarossi in Paris, becoming exposed to Impressionism and Post-Impressionism. In 1913 their son Bill was born. In 1923 they bought a fisherman’s cottage at 27 North Corner, Newlyn, which would remain Dod’s base for the rest of her life.

In 1920 the Procters spent a year in Rangoon, Burma, working on murals for the Kokine Palace. Back in Cornwall, Dod painted a series of portraits of young women in a spare, striking style, thoroughly modern yet also reminiscent of early Renaissance Italian frescoes. Most famous of these was Morning, a portrait of Cissie Barnes, the daughter of a Newlyn fisherman. It was voted Picture of the Year at the Royal Academy in 1927, bought by the Daily Mail and donated to the Tate Gallery.

In the 1930s Dod’s style changed from the hard-edged, carved light of the 1920s portraits to a softer style echoing Renoir and the Post-Impressionism of artists such as Lucien Pissarro. She achieved radiance by painting on a white ground. The quiet hour, 1935 (New Art Gallery, Walsall), depicting a pensive young woman in the kitchen at North Corner, is in the tradition of Newlyn School paintings of local interiors. Her Newlyn garden was the inspiration for many flower still lifes.

After Ernest Procter’s untimely death in 1935 Dod travelled abroad, to Tenerife in 1938 and 1945, Basutoland in 1948 and Tanganyika in 1964. In the 1950s she spent time in the West Indies with the artist Alethea Garstin (1894-1978), producing a number of sensitive portraits of local children, such as Gabriel in St Lucia (Penlee House Gallery and Museum, Penzance). Dod was elected RA in 1942 and was President of the St Ives Society of Artists in 1946. She died in Newlyn in 1972.