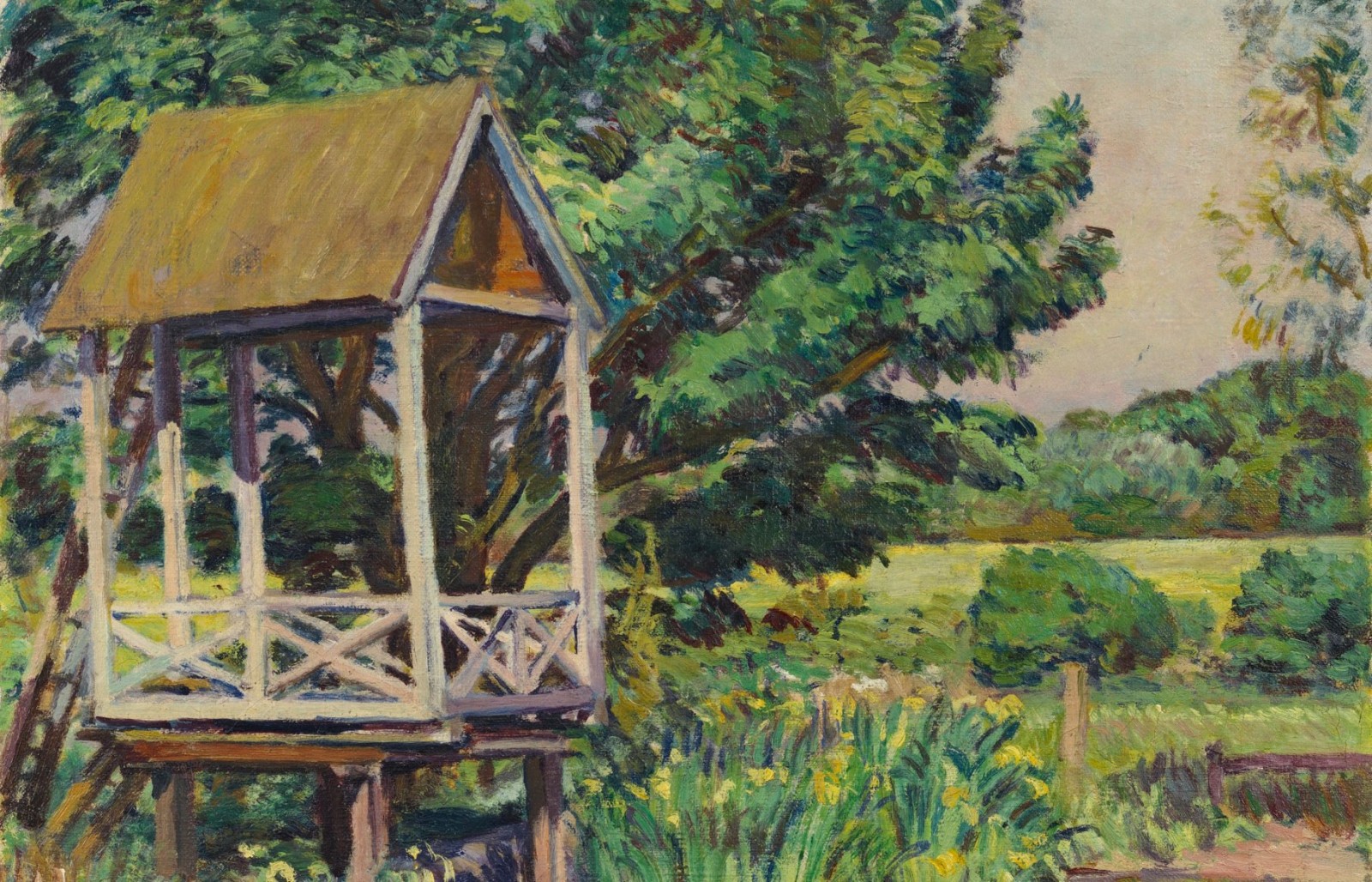 The Gazebo at Charleston, painted in 1940 by Duncan Grant (1885 – 1978), will spend the summer enveloped within the history of the site on which it was created, the Charleston Farmhouse. The Farmhouse was the country retreat of the Bloomsbury group, a set of fine British artists and writers who contributed to the development of modernist British culture and was established in 1916, when Duncan Grant and Vanessa Bell moved to the rented farmhouse in the Sussex Downs; on the recommendation of Vanessa’s sister, Virginia Woolf. Richard Green Galley is delighted to have lent this work to the Charleston Trust and it now currently hangs in one of the farmhouse’s many bedrooms, overlooking the spacious walled garden and large farm pond that the titular gazebo depicted in this work once sat upon, at the front of the house. 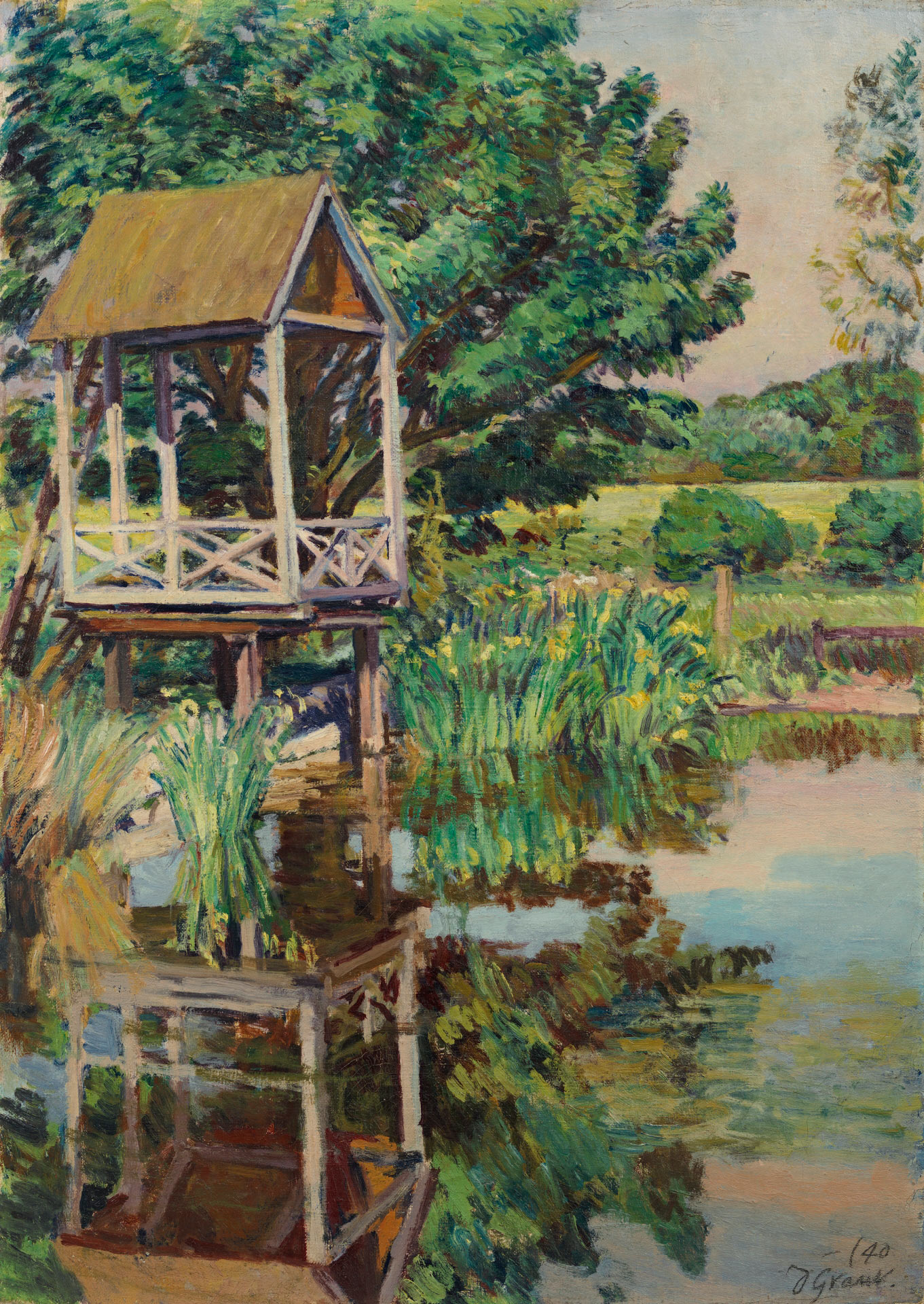 Once Charleston became more of a regular country retreat, its inhabitants set about cultivating and ornamenting the garden. The pond was not neglected - waterlilies and irises were introduced and eventually sculpture appeared, as though to punctuate the pond’s borders. Most of these outdoor additions were the ideas of Duncan Grant and his most ambitious project was undoubtedly the erecting on stilts of a gazebo that would stand at the pond’s edge. It is this that forms the subject of this painting, which seems to be its only visual record.

The gazebo’s origins were in a hut on a platform which revolved to catch the sun and stood in the nearby orchard. Some years later, the hut was moved onto the wooden structure seen here. Finally, the old hut decayed, and it was then that Grant built another (seen here) which, according to Vanessa Bell’s son, Quentin Bell, was ‘decorated in the Chinese manner; it was adorned with brilliant colours and arresting designs. It looked very fine indeed’. The gazebo lasted for the summer of 1940, when Grant painted this work, catching the scene before an autumn gale that year brought the whole thing down – it sadly was not rebuilt.

The previous owner of the painting was the poet, writer and editor, John Lehmann (1907-87), a visitor to Charleston in the 1930s and manager of Leonard and Virginia Woolf’s publishing firm The Hogarth Press.

We are grateful to Richard Shone for the cataloguing of this work.

We urge you greatly to see this work in that place of its conception, its first home. The Charleston Trust works tirelessly to keep this house alive and engrossed within the spirit of its past occupants. The Bloomsbury group included some of the twentieth century’s most pioneering artists and literary figures and this wonderful charity both acknowledges, maintains and celebrates what was once their country retreat, a site of solace; and an important piece of British art historical heritage.

For more information on The Charleston Trust and Farmhouse, please visit…
www.charleston.org.uk