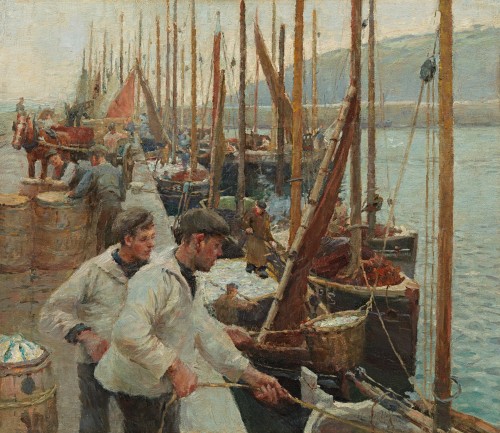 Around 1905, Harold Harvey was frequenting the quayside of Newlyn to observe and record activities that were changing under his eyes. The eldest son of a successful bank cashier in nearby Penzance, he had seen important changes since his childhood. The neighbouring fishing village had witnessed the construction of a south pier in the mid-1880s; it was topped with a lighthouse in 1892; and a north pier was opened in 1894. Almost immediately the area enclosed was not considered large enough and an even longer pier, parallel to the north pier was added, using granite from the Semmens quarry at St Just. The large fishing fleet, which formerly had moored out in Gwavas Lake, the safe offshore anchorage, could now tie up for unloading in the new harbour – the scene represented in present canvas.

Harvey’s Unloading the catch, Newlyn, thus, stands in sharp contrast to Stanhope Forbes’s A fish sale on a Cornish beach, 1885 (fig.1) – although important elements are similar. For the fisherman, the cloth cap and cream canvas ‘duck frock’ were, as Harvey confirms, a form of uniform. Horse-drawn, two-wheeled Carlington carts operated by independent ‘jowsters’, seen in the background of Forbes’s canvas, formerly purchased portions of the catch, and now took barrels of fresh mackerel or herring to Penzance railway station for speedy onward transmission to London and the Home Counties. The start of this process is what we see in Harvey’s canvas – baskets of fish are being hoisted ashore using ‘block-and-tackle’ attached to the mast of each vessel. At low tide, carts could even, on occasion, be driven into the harbour basin for swift unloading (fig 2).

At this point, herring fleets were still mostly ‘under sail’, although steam trawlers were slowly edging into their trade – much to the dislike of the men and boys who, skilled in the use of ‘drift’ and ‘Seine’ nets, would read the surface of the sea for migrant shoals that swam south from their spawning grounds in the north. For the painter, the processes of landing, sorting and barrelling the catch were enthralling. All were conducted at speed and required the artist-observer to perform likewise. For someone whose student days in Paris involved familiarity with Impressionist techniques, the sense of immediacy was important, and none of his figures must look frozen in time. In Unloading the catch, Newlyn, as the sky at Tolcarne Beach and the Lidden headland turns to evening, that important race to preserve the fruits of toilers on the sea is well in hand.

A descendant of considerable Cornish lineage, Harold Harvey was one of the few Newlyn artists to spend his entire life in Cornwall, apart from one brief period abroad. Described in The Studio, 1924, as one of the 'truest and sincerest of British Painters,' his works were considered 'genuine interpretations of place and people', and praised for their success in conveying 'the peculiar and rather wistful geniality of this corner of England'. He first studied under Norman Garstin, and then went to Paris during the 1890s, where he continued his studies at the Academie Julian under Benjamin Constant and Jean-Paul Laurens. On his return, he married Gertrude, who was also an artist, and they settled in Newlyn. A prolific painter of varied subjects and styles, Harvey never achieved his due critical acclaim. He was a regular exhibitor at the Royal Academy from 1898-1941 and held several one-man exhibitions in London, at the Mendoza Galleries, Barbizon House and the Leicester Galleries. Harvey's artistic development reveals an ability to assimilate the changing Newlyn styles.  The muted palette of his first works denote an appreciation of the early generation, especially Alexander Stanhope Forbes. He then adopted more brilliant colours, comparable to the contemporary works produced by Laura Knight. From circa 1915, he painted in an increasingly flat, decorative style and broadened the range of his subjects which now included sophisticated interior scenes. By the 1920s his figures both in style and scale display the influence of Dod Procter. Essentially a realist painter of local life, Harvey's works reflect above all a deeply felt commitment to his beloved Cornish home. 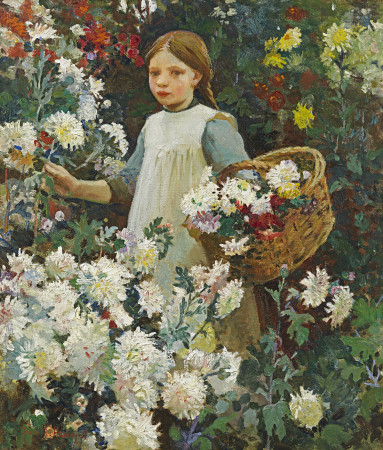