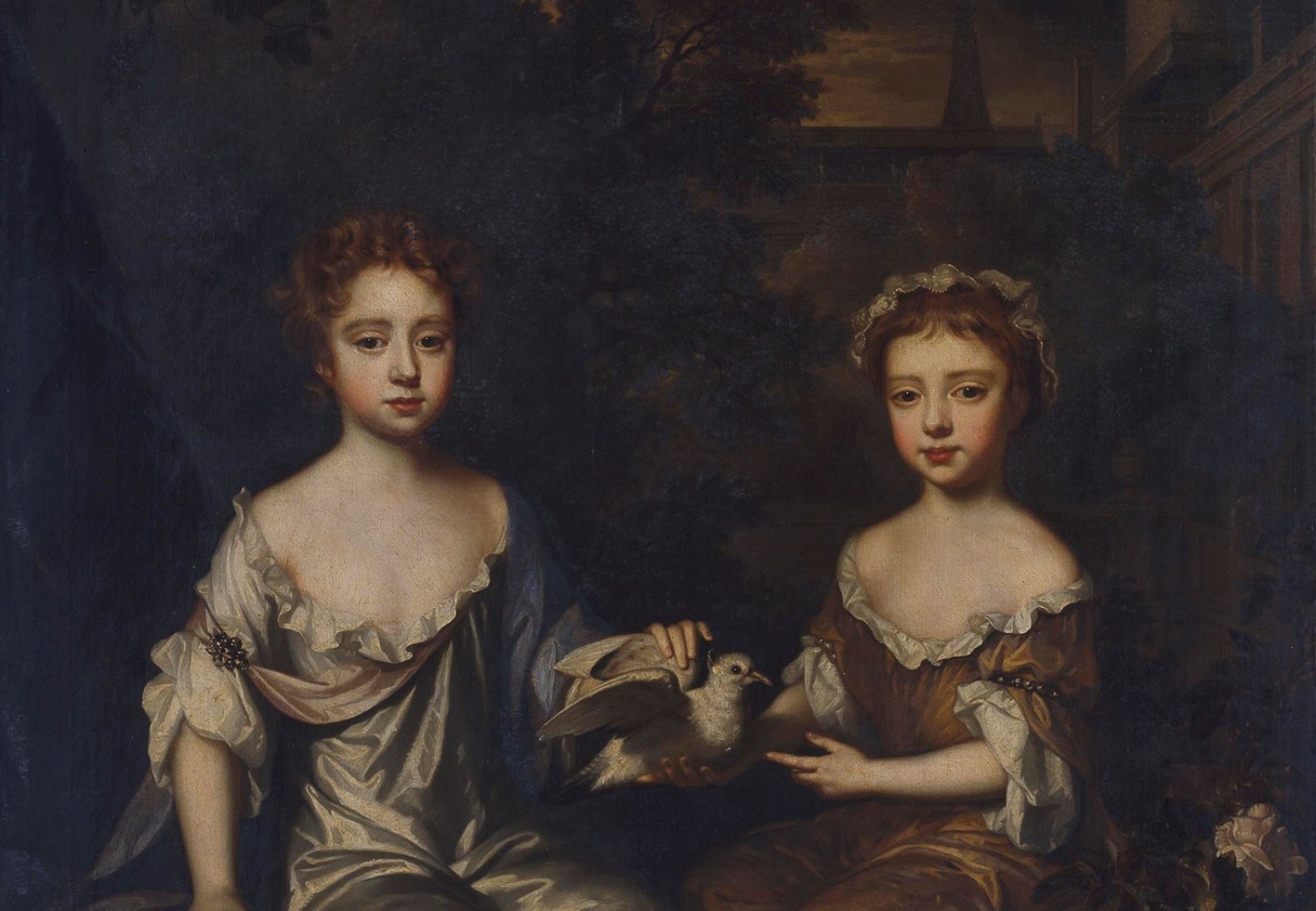 Willem Wissing’s “Portrait of Henrietta and Mary Hyde” in the Tate’s British Baroque, Power and Illusion

This double “Portrait of Henrietta and Mary Hyde” (c.1683-5) by seventeenth-century British painter Willem Wissing, previously sold by Richard Green to the Tate collection in 2006, is a highlight of the Tate Britain’s current exhibition, British Baroque, Power and Illusion (4 February – 14 April 2020). This major exhibition marks the first time that Tate has dedicated an entire show to the exploration of baroque culture in Britain. From the Restoration of Charles II in 1660 to the death of Queen Anne in 1714, British Baroque considers the significant role art played in visually codifying perceptions of the monarchy throughout this often-overlooked period of British art history; tracing the rich connections between art and power articulated in this important collection of works. 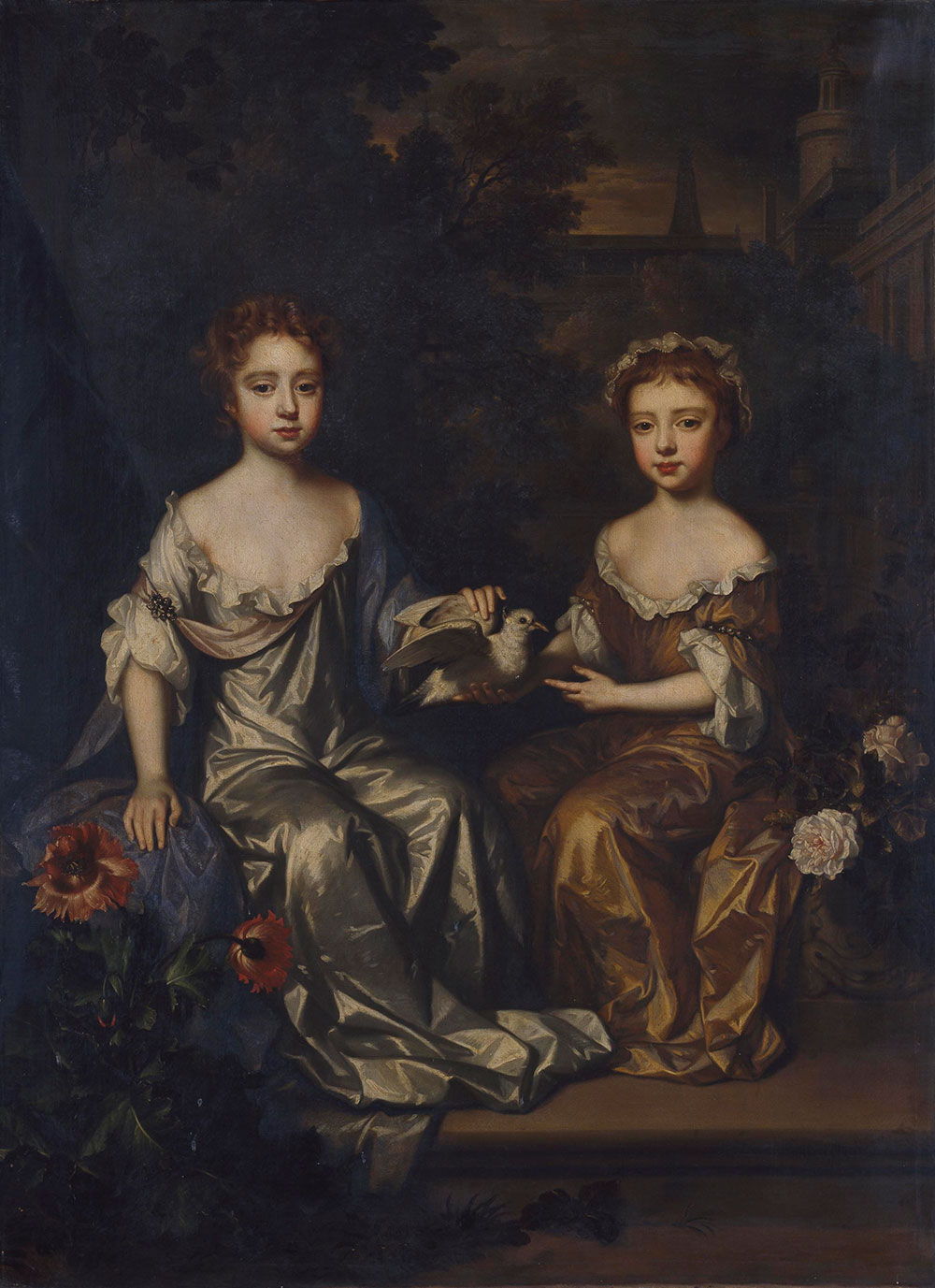 This painting is one of Wissing’s most charming double portraits, beautifully balanced in composition and rich in colour and detail. Willem Wissing came to England in 1676, shortly after war and economic uncertainty had attracted the van de Veldes from Holland to work for the sophisticated Court of Charles II. Wissing came to prominence in 1683 with a portrait of James, Duke of Monmouth, the King’s eldest son (an illegitimate heir by Lucy Walter), and from then on enjoyed a glittering career painting for the Stuart Court and aristocracy until his premature death in 1687.

Wissing places Henrietta and Mary Hyde in the elaborate garden of a baroque mansion, embowered in trees and flanked by poppies and roses, perhaps with connotations of Night and Day. The extravagant artificiality of the setting is enhanced by the velvet curtain which continues the diagonal of Henrietta’s seated figure. The dove emphasises the girls’ dewy innocence. They are richly dressed in satins, the cool colours – silver, blue and lavender-pink – of Henrietta’s costume contrasting with the warm bronze of her sister’s. The highlights playing on their dresses and the pearly hue of their skin make them images of youthful beauty. Circa 1685, when the Hyde portrait was made, Wissing was at the height of his powers, at ease with the baroque vocabulary which brought an air of Continental sophistication to his portraiture.

The sitters depicted in this double-portrait, Lady Henrietta and Lady Mary Hyde, were two very important children close to the centre of Stuart Court circles. They were younger daughters of leading politician Laurence Hyde, 1st Earl of Rochester (1642-1711) and his wife Lady Henrietta Boyle, daughter of Richard, 1st Earl of Broughton and 2nd Earl of Cork. Laurence was the second son of the wily Edward Hyde, 1st Earl of Clarendon (1609-1674), Chancellor of the Exchequer and one of the architects of the Restoration. The shotgun marriage of Edward Hyde’s daughter Anne (1637-1671) to James, Duke of York in 1660 placed him even closer to royalty. Lady Henrietta and Lady Mary Hyde were thus nieces-in-law of James II (reg. 1685-88) and cousins of Queen Mary, who came to the throne in the Glorious Revolution of 1688, and of Queen Anne (reg. 1702-14).

To read more on this exhibition, please visit: