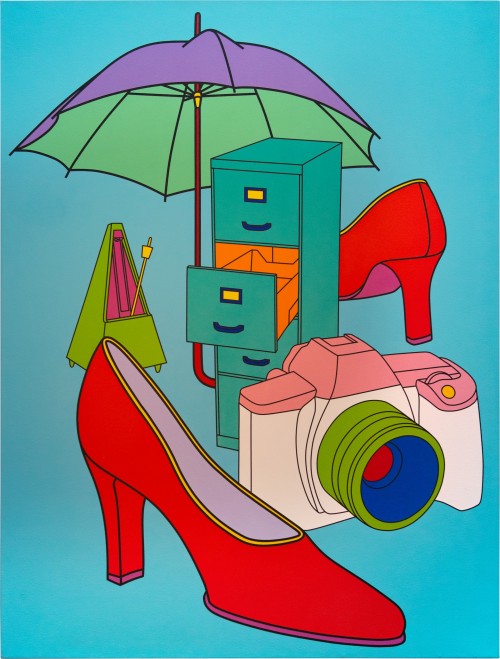 Leslie Waddington, acquired directly from the artist as a gift for Clodagh Waddington in 2000

Painted on a flat sky-blue ground in Michael Craig-Martin’s unmistakable graphic style, four equally intense, but disparate objects fill the space between a pair of red high-heeled shoes. As well as the balance and boundary of the pair, areas of red or hot pink connect the camera lens, umbrella handle and interior of the metronome, while even smaller details, the trim of the shoes, the camera button, the filing cabinet’s labels, are united by acid yellow. Immediately capturing the eye and the viewer’s imagination, these vast, vivid incongruous forms render the ordinary iconic in the artist’s unique pictorial language. In his recent essay on the artist, ‘Art in the Present Sense’, Ben Luke explains, ‘Within Craig-Martin’s paintings is a world of vivid sensation, of unexpected pleasures, that bellies the prosaic nature of the items he depicts. It is this ability to make the routine strange, to imbue the quotidian with deep sensory and emotional resonance, that makes Craig-Martin such a compelling artist.’[1]

When discussing With red shoes, Craig-Martin recalls, ‘Some of my paintings, like this one involving multiple images, allow me to play with the genre of still life by using its formats while subverting its usual narrative ‘observed’ coherence. Each image here was drawn separately and each is in its own individual perspective. I assemble comparatively unrelated images to elicit the widest possible range of association – women, shoes, weather, information storage, photos, music. I arranged them playing with scale and colour to create a visually coherent grouping where they imply an unexpected kind of sense. Although everything in the painting is individually familiar, this is not a record of a situation I or anyone has seen in the past – it only exists in the present moment through this painting.’[2]

The original owner of this extraordinary work, Clodagh Waddington, was known for her sense of humour, wit and style. Her passionate views extended to her taste in art and she particularly loved With red shoes, keeping it even after she moved to a smaller home and could no longer hang it. A gift from Leslie to Clodagh, Craig-Martin recalls when he first showed the painting to them, ‘Leslie and Clodagh both came to the studio. Clodagh immediately said she loved this painting. The red shoes were definitely what seduced her.’[3]

Michael Craig-Martin was born in Dublin, Ireland in 1941, but grew up and was educated in the United States, his family moving to Washington DC in 1946. He studied Fine Art at the Yale School of Art and Architecture from 1961-66 and taught at the School of Visual Arts, New York from 1965-66. He moved to London in 1966, teaching at the Bath Academy of Art from 1966-69, as well as at Canterbury College of Art from 1968-70, before becoming Artist-in-Residence at King’s College, Cambridge from 1970-72. From 1974-88, Craig-Martin taught at Goldsmith’s College, University of London and was appointed Millard Professor of Fine Art, Goldsmith’s College between 1994-2000.

His first solo exhibition was at the Rowan Gallery, London in 1969. He exhibited work in the British Conceptual art exhibition, The New Art, at the Hayward in 1972 and has held retrospectives at the Whitechapel Art Gallery in 1989, at the Irish Museum of Modern Art, Dublin in 2006 and at the Serpentine Gallery, London in 2015. He was a Tate Trustee from 1989-99, was awarded a CBE in 2000 and was elected a Royal Academician in 2006. In 2016 he was knighted in the Queen’s Birthday Honours for services to Art. He continues to live and work in London.