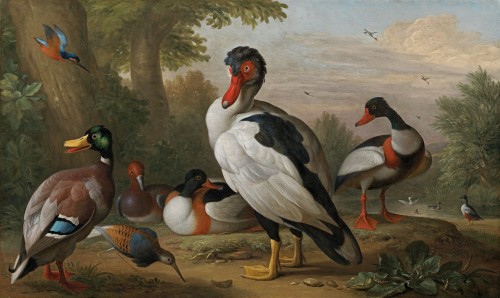 A Muscovy duck, a mallard, shelducks, a pochard and a ruff, with a kingfisher in a river landscape

A Muscovy duck, a mallard, shelducks, a pochard and a ruff, with a kingfisher in a river landscape

The baroque era saw the development of large-scale, highly decorative bird paintings, with exponents such as the Dutch painter Melchior de Hondecoeter (1636-1695). They reflected the increased interest in natural history in the seventeenth century and the importation of exotic fowl from Spanish and Dutch expeditions to the East Indies, Americas and Africa. Many of these were naturalized as colourful additions to gentlemen’s parks.

Of Hungarian Protestant gentry stock, Jacob Bogdani worked in Amsterdam from 1684 to 1686 before arriving in London by 1688. For the first decade of his career in England he concentrated on still life paintings of flowers and fruit, becoming renowned for his lavish and characterful assemblages of birds from the late 1690s.

This painting is dominated by a Muscovy duck (Cairina moscata), its size, striking black and white plumage and red beak and wattles giving the bird a sculptural grandeur. Muscovies are native to Central and South America, where they were domesticated by Pre-Columbian societies, and were brought to Europe by sailors in the sixteenth century. ‘Muscovy’ has no connection with the kingdom that would become Russia and was perhaps simply shorthand for an animal of exotic origin.

Bogdani was fond of painting ducks, capturing their stance, subtle plumage and air of alert curiosity. To the left of the Muscovy duck is a male mallard (Anas platyrhynchos) and behind it a male pochard (Aythya farina), a diving duck (a winter visitor to Britain in its wild state) with an elegant chestnut head and neck, grey back and blue-grey beak. Flanking the Muscovy duck are two shelducks (Tadorna tadorna).

In the left foreground by the mallard is a ruff (Calidris pugnax), a wading bird famous for its lekking or breeding dances, in which the males fluff up the feathers round their necks so that they resemble haughty Elizabethan gentlemen. The ‘dances’ and threatening behaviour are aimed at other males, but the females are suitably impressed. At top left a kingfisher, swooping to catch a fish, jewel-bright against the woodland, brings a sense of movement to the composition.

By his own account, Bogdani preferred to paint his flowers from the motif, in spring and summer, spending the winter on his bird pieces. As well as observing live specimens in aviaries such as that of Admiral George Churchill, Ranger of Windsor Great Park, he must have built up a studio archive of drawings or perhaps oil sketches of birds, as the creatures appear in similar poses in more than one painting. The ruff, for example, can be seen in Muscovy ducks and other birds in a wooded landscape (private collection), which was in the Jacob Bogdani exhibition at Richard Green in 1989[1].

This painting comes from the collection of Anthony Galliers-Pratt (d.1998) and his wife Angela at Mawley Hall, Shropshire. Mawley Hall is a magnificent Palladian mansion designed by Francis Smith for Sir Edward Blount, 4th Bt. circa 1730. Its restrained brick exterior conceals exuberant stucco work. Mr Galliers-Pratt, who owned an engineering company, was a committed supporter of architectural and artistic heritage, serving on the Council of the Georgian Group and as Chairman of the Attingham Trust, which runs courses for museum curators to study a number of historic houses in situ. Prior to living at Mawley Hall, the Galliers-Pratts lived at Sutton Hall near York and this Bogdani is thought to have come from there.

Jacob Bogdani was born in Eperjes in the County of Sáros, northern Hungary (the present day Presov, Slovakia), the son of Lewis and Susanna Bogdani, who were probably minor gentry. The threat from the Turks, who besieged Vienna in 1683, and the difficulties faced by the Protestant Bogdani living in a corner of the Catholic Austro-Hungarian empire, sent the young man westward. He worked in Amsterdam from 1684 to 1686, sharing a house with the Hamburg still life painter Ernst Stuven (c.1657-1712). He had settled in London by 1st June 1688 and became known as ‘The Hungarian’. Bogdani lived in the Covent Garden area for the rest of his life, marrying Elizabeth Hemmings in 1693.

For a decade or more after settling in England, Bogdani specialised in still lifes of fruit and flowers. In 1694 he supplied flowerpieces (now lost) for Queen Mary’s Looking Glass Closet in her beloved Water Gallery at Hampton Court, complementing the exquisite carved flowers and fruit provided by Grinling Gibbons. Charles Hatton commented in 1697: ‘I was this afternoon to see ye few best plants yet remaining ye noble collection of plants at Hampton very well painted by one Bugdan, a Hungarian and excellent painter of fruits and flowers’. Among the works were ‘very fine tulipps, painted from tulipps growing in my Lord Dovers garden [at Cheveley near Newmarket]’. In 1698 the 1st Duke of Devonshire bought flowerpieces from Bogdani for the decoration of his new country house, Chatsworth.

Around 1691 Bogdani explained his working methods: ‘He paint[s] in the Spring flowers & in the Somer flowers & Fruits when they are out Lobsters and oyster pieces. In the Winter pieces of Fowell & plate’. The production of bird pieces gradually became a greater part of his oeuvre. A number were owned by Admiral George Churchill, younger brother of the Duke of Marlborough and Ranger of the Great and Little Park at Windsor, who built a celebrated aviary near his house. Churchill’s exotic birds were undoubtedly a great inspiration to Bogdani, who must have made detailed studies, in oils or perhaps in watercolour, upon which he based his deft assemblages of birds.

Queen Anne acquired several of George Churchill’s bird paintings by Bogdani after the Admiral’s death in 1710; they remain in the Royal Collection. Her brother-in-law William III bought works by Bogdani for his palace at Dieren in Holland; William’s favourite Arnold van Keppel, Earl of Albemarle, had twenty-two Bogdanis at his Huis de Voorst near Zutphen. Bogdani’s patrons also included Edward Harley, 2nd Earl of Oxford and Sir Robert Walpole. Bogdani prospered in England, amassing property at Finchley, Spalding in Lincolnshire and Hitchen in Hertfordshire, becoming Lord of the Manor of Hitchen.

Bogdani’s daughter Elizabeth married the Transylvanian still life and bird painter Tobias Stranover (1684-1756), who worked in Bogdani’s studio. Bogdani’s son William was also trained by him as an artist, although he later took a post with the Board of Ordnance and became a Fellow of the Royal Society and the Society of Antiquaries and a member of the Spalding Gentlemen’s Society. Jacob Bogdani died at his house in Great Queen Street, Lincoln’s Inn Fields, in 1724. By a quirk of fate, some of his fortune eventually trickled down to the great landscape painter John Constable, as Bogdani’s grandson William Maurice Bogdani married Deborah Rhudde, kinswoman of Constable’s formidable grandfather-in-law, Dr Durand Rhudde, Rector of East Bergholt.