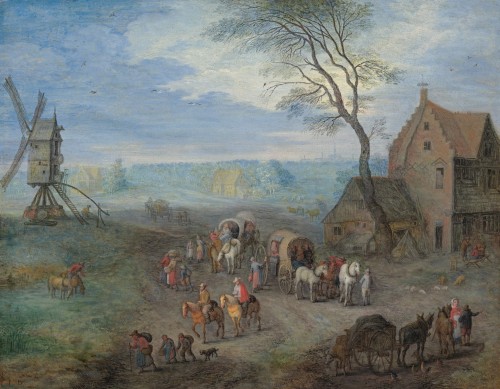 A village scene with travellers by a windmill

A village scene with travellers by a windmill

by descent to their grandchild

Joseph van Bredael came from a large family of Antwerp artists and specialized in compositions inspired by the work of Jan Brueghel the Elder (1568-1625), second son of the famed Pieter Bruegel the Elder (c.1525-1569). Known as ‘Velvet Brueghel’ for the miniaturist delicacy of his work, Jan was hugely successful in his own lifetime. For the next two centuries, his work was avidly collected and a number of artists emulated his style, among them Joseph van Bredael, his cousin Jan Frans van Bredael the Elder (1683-1750), Matijs Schoevaerdts (1665-after 1703) and Théobald Michau (1676-1765).

Joseph van Bredael spent four years from 1705 copying and creating landscapes in the manner of Jan Brueghel, working for the Antwerp art dealer J de Witte. He built his career upon an ability to reimagine Jan’s seventeenth century world, tuned to the sensibility of his own day. This painting is on copper, a support often used by Brueghel for his more important cabinet works, as it is more expensive than the commonly used wood panel. It provides a particularly smooth surface, suited to the miniaturist approach of both Brueghel and van Bredael’s style. Although small in compass, these landscapes have a panoramic sweep and were meant to be examined in detail, perhaps taken off the wall and held in the hand, delighting the eye with their complexity.

Van Bredael’s Village scene treats a theme often employed by Jan Brueghel, travellers passing through a village. The zigazag line of figures and carriages, winding into the landscape; the mix of social classes, from gentlemen on fine horses to peasants with carts, are typical of Brueghel, as are the crooked houses and post mill, which could be turned to face the prevailing direction of the wind. To enhance the sense of an Old Master, Van Bredael’s figures are in seventeenth century dress, not that of his own day. His eighteenth century palette, however, is softer and brighter than Brueghel’s and his approach to landscape more naturalistic. His staffage is painted with great attention to detail, but with a painterly freedom rather than the more linear approach of his predecessor. The horses, with their long, slender legs, are a quirk of his style. Van Bredael organizes the landscape with great subtlety, using the progression of brown foreground, green middle ground and blue distance in the seventeenth century manner, finishing with a radiant cloudscape dotted with birds.

A similar grouping to the covered waggon at the right, with a woman offering a drink to the passengers, can be found in van Bredael’s A covered wagon leaving a village (Dorfausgang mit planwagen) in the Landesmuseum, Mainz[1].

This painting was in the collection of the Alte Pinakothek, Munich by 1905. In the early twentieth century the museum deaccessioned some of its large holdings of Dutch and Flemish paintings in order to acquire Spanish and Italian works. Village scene was acquired by the Munich artist Hermann Ebers (1881-1955), a friend of the poet Rainer Maria Rilke and the novelist Thomas Mann. He sold it circa 1925 to Erich Goldschmidt (1883-1931), head of the Berlin banking house Joseph Goldschmidt Inc. Erich’s widow, Dr Margot W Goldschmidt (1898-1988), came to Britain around 1935 with her son and settled in Edinburgh. The painting has descended to their grandchild.

Joseph van Bredael was born on 18th August 1688. He came from a large family of Antwerp artists whose work was in demand from as far afield as London, Paris and Vienna. He was the grandson of Peeter van Bredael (1629-1719) who specialised in Italian pastoral landscapes, and the second son of the battle painter Georges van Bredael (161-1705). Joseph’s mother Johanna was the daughter of the artist Abraham van Diepenbeeck. Joseph’s elder brother Jean-Pierre Bredael the Younger also specialized in battle scenes, while his cousin Jan Frans van Bredael the Elder (1683-1750) painted landscapes.

On 27th July 1705 Joseph van Bredael was employed for four years by the Antwerp art dealer J de Witte to copy small cabinet paintings by Jan Brueghel the Elder (1568-1625) and Philips Wouwerman (1619-1668). Much of Joseph’s work consists of variants upon themes treated by Jan Brueghel, painted in a soft and delicate miniaturist style with a slightly warmer palette than Jan’s. Joseph van Bredael signs his paintings jB, which to the unwary, in his own day and later, could suggest the hand of Jan Brueghel the Elder.

Joseph is thought to have made a visit to Paris in 1725. He made copies after Claude Lorrain for the diplomat and collector Jean-François Leriget de la Faye (1674-1731). In 1735 Joseph received a legacy from his brother Jean-Pierre, who had died in Vienna. Joseph emigrated to Paris and became a member of the Académie Royale. He became a Court painter to Louis, Duc d’Orléans (1703-1752), cousin of Louis XV and died in Paris in 1739.

Other Works By
Josef van Bredael: 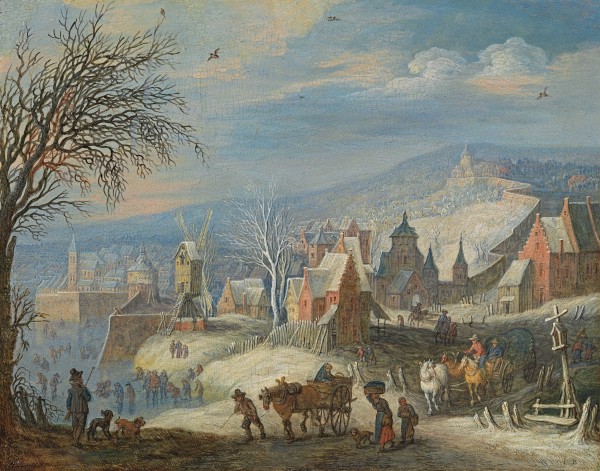