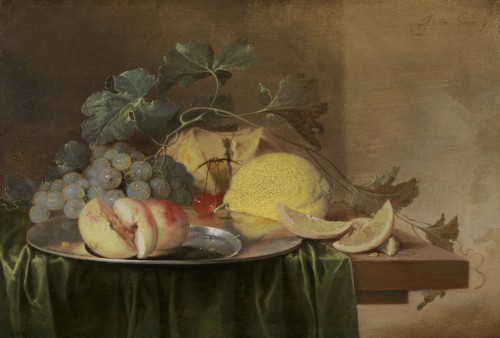 Still life on a wooden table partly covered with a dark green cloth with a peach, grapes, cherries and lemon

Still life on a wooden table partly covered with a dark green cloth with a peach, grapes, cherries and lemon

The panel is marked FDB (for François de Bout)

Jan Davidsz. de Heem (or: Johannes de Heem) was born in Utrecht, where his father, David van Antwerpen, a musician, had moved from Antwerp. In 1625, the young painter, with his mother and step-father, moved to Leiden, where he is recorded until 1631. His teacher is unknown, but many of his earliest paintings (from 1625-1628) show a strong dependence on the work of the Utrecht still-life painter Balthasar van der Ast. Upon leaving Leiden, he presumably spent some time in Amsterdam, but by the spring of 1636 he had settled in Antwerp. He paid his membership fees to the Antwerp guild for the first time in the administrative year 1635/36 (which runs from September to September). By 1660, but possibly as early as 1658, he had settled in Utrecht again; he may already have spent longer sojourns there during the previous years. However, he was not recorded as a member of the Utrecht guild until 1669, as far as we can tell now. Following the French invasion in 1672 he returned to Antwerp, where he was buried on 10th February 1684.

Jan Davidsz. de Heem was one of the most distinguished and influential still-life and flower painters of the seventeenth century. In the course of his career, more than any other still-life painter, he explored new areas and tried new styles and techniques, developing new approaches, as well as emulating the work of others, always in a highly individual manner. His success was substantial and he attracted a large following, both in the Northern and Southern Netherlands, as well as abroad.

The present still life is one of the artist’s smaller and more intimate works. It can be dated to c.1646. In the 1640s, de Heem produced still lifes in a large variety of sizes. Particularly in the first years of this decade, he made a name for himself painting large compositions, measuring up to 1.5 by 2 metres, but from his earliest years on, he continuously produced such smaller still lifes. Many of these will have been destined for the free market, whereas the large luxury still lifes will mostly have been painted on commission, destined for a specific spot.

Until 1655, Jan Davidsz. de Heem dated his works with some regularity, which provides a solid basis for the dating of still lifes that the artist did not date himself. In 1646, de Heem dated a total of three known still lifes; another five can be assigned to the same year, in my view, on the basis of stylistic comparison, including the painting discussed here. A small landscape painting, an extremely rare item in de Heem’s oeuvre, can probably also be assigned to 1646.

Closely related to the present painting is a larger still life in the Toledo Museum of Art, which is signed and dated 1646.[i] That still life is set upon a similar wooden table, also partly covered with a dark green cloth, which has been rendered in the same way. Also, the handling of the pewter plate and of the various types of fruit is very similar, as is that of the vine. The lemon appears to have been modelled after the same preparative study. Similar lemons occur in several still lifes by de Heem from the mid-1640s, such as two vertical dated compositions from 1646, and in a painting, probably from the previous year, in the Montreal Museum of Fine Arts, which also includes a halved peach that must have been done after the same study as the one in the present painting.[ii] Very close in overall handling is a very small still life in the Metropolitan Museum of Art, New York, that can also be dated to 1646.[iii] Another indication of the date is the calligraphy of the signature, which is virtually identical to that on the paintings in Toledo and in New York. Over time, de Heem’s signature changed and its calligraphy can give an indication of the date of origin of the painting that bears it.

Despite its relatively small size, this still life of fruit possesses a degree of monumentality. In part, this is due to its composition. Like many still lifes of this type, it has been built up within a triangle. The eye of the viewer is drawn towards a second triangle, within the outer triangle, formed by the lemon, the bread roll and the peaches, all of which catch some more light than the other motifs. The modest array of good-quality food is crowned by the vine branch, like a laurel wreath on the head of a victorious emperor. The variety of softer textures of the fruits and the tablecloth are juxtaposed with the hard, shiny pewter plate. De Heem rendered these different textures with great accuracy and takes his comparisons a step further by adding the translucent, warm red cherries, which, together with the blush on the peach, provide a red accent in the centre of the still life, drawing in the eye of the viewer. Their colours have been built up with thin, semi-transparent paint glazes. During the period in which this still life originated, de Heem painted fairly light backgrounds. By painting a lighter stretch to the right, he suggests that there is an angle in the background wall, thus enhancing the sense of three-dimensionality in his picture.

It is unlikely that Jan Davidsz. de Heem intended anything other than to present a pleasing image of an arrangement of attractive food. It may be, however, that a viewer might associate the combination of grapes and bread with the wine and bread of the Eucharist or that the vulnerable cut fruit reminded the viewer of the brevity of such pleasures and that of life itself, but most of it will have been, and still is, a feast for the eye.

Jan Davidsz. de Heem was born in Utrecht to a family of Flemish descent, at Easter time 1606, which would have been the last week of April. His father, David Jansz. van Antwerpen, was a musician and not, as most early literature would have it, a painter. He died in 1612 and de Heem’s mother remarried a year later to a bookbinder and book dealer of German origin. In the spring of 1625 the family moved to Leiden, where the artist’s mother had been born. There, the painter started to use the surname de Heem, and there his artistic career kicked off. However, the first mention of the young artist can be found in the records of the orphanage board in Utrecht, from which we learn that in February 1625, still registered as ‘Jan Davidtsz. van Antwerpen’, he was planning a journey to Italy. The funds for that trip, however, were not granted, probably out of fear that his virtually bankrupt stepfather would usurp them before they could be put to their proper use.

Who trained the young de Heem in Utrecht has not been recorded, but in all likelihood it was the still-life painter Balthasar van der Ast (1593/4-1657). De Heem’s earliest paintings were clearly inspired by van der Ast’s compositions, and the fact that he liberally borrowed motifs from recent works by that master during his early years suggests that he must at least have had intimate knowledge of van der Ast’s production around 1624.

In December 1626, Jan Davidsz. de Heem married  Aletta van der Weede, a girl from his native city, Utrecht. They had several children, and the baptism in April 1631 of their son Cornelis, the later still-life painter, is the last sign of de Heem’s presence in Leiden. Probably due to debts, he must have left the city shortly after, without further notice. Probably he moved to Amsterdam – his work from the following years shows an affinity with that of Jan Jz. den Uyl, who was working there, while several of his friends, among them Pieter Potter (1597/1600-1652) and Rembrandt (1606-1669), moved to Amsterdam around the same time – but there is no record of him there.

Some five years later, by March 1636, de Heem had settled in Antwerp, enrolling as a master painter in the local guild of St Luke some time during the administrative year 1635-1636, and registering as a poorter (citizen) on 28th August 1637. Around that time, Jan Lievens (1607-1674), with whom de Heem was acquainted from his Leiden years, drew his portrait.

During the following years de Heem’s artistic career started to flourish, certainly from 1640 onwards, but biographical details remain scarce. During the 1640s he painted a substantial body of work and registered several pupils with the Antwerp guild. In March 1643, Aletta van der Weede died and a year later the painter remarried. His new wife, Anna, was a Catholic and a daughter of Antwerp’s foremost harpsichord maker and a prominent citizen, Andreas Ruckers. The couple had four daughters and two sons, of whom Johannes, born in 1650, is supposed by some to have become a painter, but if so, no examples of his work are recorded.

In 1658 Jan Davidsz. de Heem was registered by the Antwerp council as a buitenpoorter (citizen outside of town). This indicates that he retained his civil rights, but was no longer a permanent resident. Most probably already around that time he spent considerable amounts of time in his native city, Utrecht. He must have moved there permanently by the early 1660s, even though only from 1665 onwards his presence in Utrecht is actually documented. Indirect proof of his move to Utrecht before 1660 is the apprenticeship of Maria van Oosterwijck (1630-1693) with de Heem, which was referred to by contemporary biographers. She is recorded to have moved from Leiden to Utrecht in May 1660. Another pupil during de Heem’s Utrecht years was Abraham Mignon (1640-1679). Mignon was first trained by Jacob Marrel (1613/14-1681) in Frankfurt am Main, but according to the biographer Arnold Houbraken his teacher brought him to Utrecht to work with de Heem when he was twenty-four years old, which age he reached in 1664. Mignon would remain active in Utrecht until his death in 1679. Another pupil, Elias van den Broeck (1651/52-1708), engaged as such for two years in 1669, appears to have followed his master upon his return to Antwerp in 1672. In that year, the French invaded Holland and the Dutch became embroiled in the third English War, and as a result the economy came to a virtual standstill. De Heem must have decided that the chances of selling his paintings in Antwerp were higher than they were in Utrecht. From his work and activities, de Heem comes across as an energetic personality who moved around a lot to follow artistic and financial opportunities, and as someone who seemed to have negotiated his way between the Catholic and Protestant factions in the Netherlands. He was raised a Protestant, but later moved freely in Catholic circles in Antwerp. He received and accepted commissions from the pious Archduke and Prince-Bishop Leopold Wilhelm in Brussels. But also, many of his still lifes from the Utrecht period – and the following years – include prominent oranges, as a plain reference to the Protestant House of Orange. During the 1660s, factions propagated the return of the Stadtholder and William III of Orange was restored to that position in 1672. De Heem appears to have been closely associated with these Orangist sympathisers.

Very little is documented of the artist’s life after his return to Antwerp. Only two documents from that period, dealing with property issues and dating from August and September 1683, are recorded. After 1675 he appears to have painted only a few still lifes. The only mention in the ledgers of the Antwerp guild is the payment of his death dues, sometime during the financial year 1683-1684, perhaps in April 1684. No burial records have been traced, however, neither for Jan Davidsz. de Heem nor for his wife, Anna Ruckers. 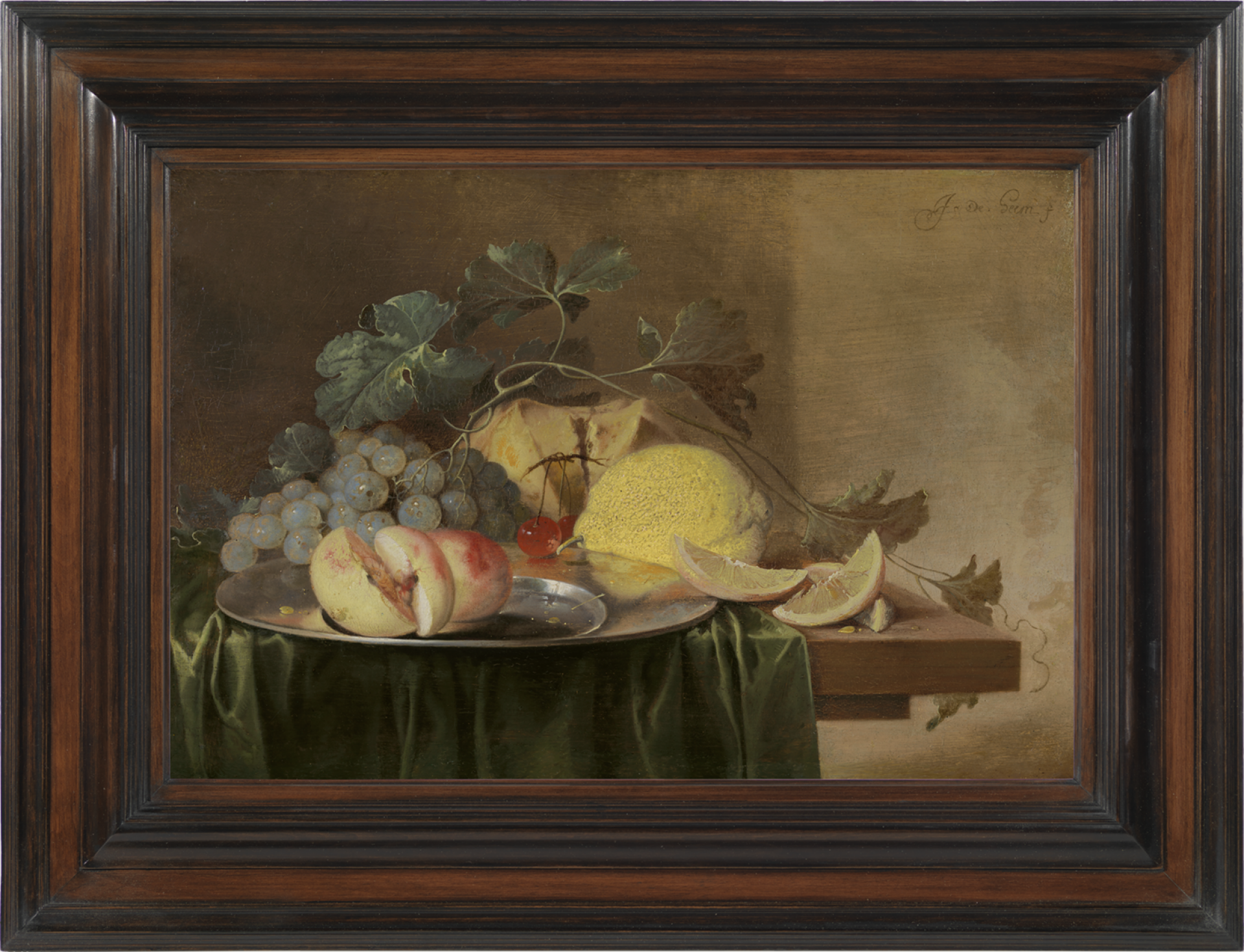