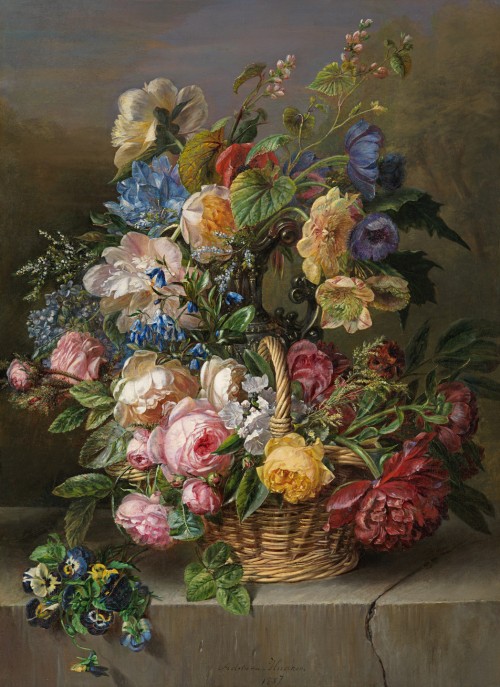 An abundant still life of flowers

An abundant still life of flowers

Mitchell Galleries, Ltd., London, as Mixed flowers in basket with urn in background on stone ledge

Set on a marble ledge before a soft, romantic woodland landscape, Adriana Haanen’s abundant flower piece is arranged in two contrasting vessels which give height and depth to this radiant display. In the foreground rich red, heavy-headed peony’s, golden roses and light pink moss roses are interspersed with kalmia and grass as they spill over a wicker basket in tight buds and full bloom, amongst a gorgeous array of textured foliage. Standing behind, an ornate metal jug holds more beautiful pale pink and yellow peonies, as well as lilac, heather, harebells and Nigella on the left, which introduce a cool palette of blues as the arrangement lifts to the evening sky. On the right, beneath sprigs of wild currant, yellow and deep blue anemones mirror the colour contrast of pansies draped across the marble ledge and into the viewer’s space in a superbly depicted example of tromp l’oeil at the bottom left corner.

11. Nigella or love in a mist    Nigella damascena

Adriana Johanna Haanen was the youngest daughter and student of the painter and art dealer, Casparis Haanen (1778-1849), who also taught her brothers, George Gillis and Remigius Adrianus and sister, Elizabeth Alida. Her mother was Isabella Johanna Sangster (1777-1846). The family moved from Brabant to Utrecht and then to Amsterdam c.1816. Haanen lived and worked in Amsterdam painting still lifes with flowers and fruit, moving to an artists’ colony in Oosterbeek in 1864. She exhibited at exhibitions of living Masters in Amsterdam and the Hague between 1841-1892, as well as Paris, Bremen, Antwerp, Brussels and the United States. Haanen also taught painting, giving lessons to Anna Abrahams (1849-1930) and Christina Alida Blijdenstein. She became an honorary member of the Royal Academy of Visual Arts, Amsterdam in 1845 and a member of the Arti et Amicitiae society, Amsterdam from 1855. In 1862 she was awarded the gold medal at the Amsterdam Exhibition of Living Masters.