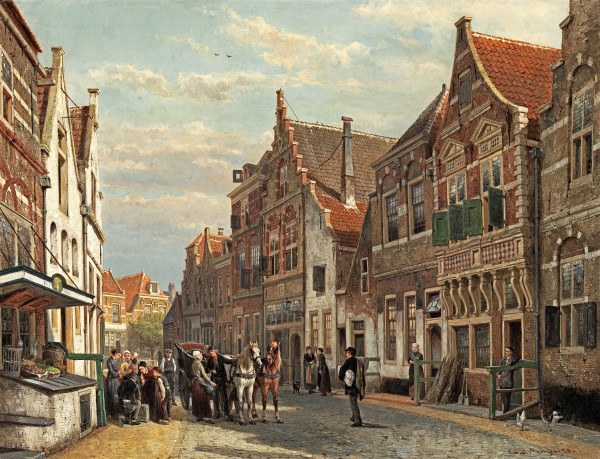 Cornelis Springer was one of the most accomplished Dutch painters of town views.  His paintings are characterized by their topographical accuracy and an interest in rendering the effects of light.  They are reminiscent of the earlier Dutch seventeenth and eighteenth century masters Jan van der Heyden (1637-1712) and Issac Ouwater (1750-1793).  Springer’s subjects included views of Amsterdam, Alkmaar, Den Briel, Enkhuizen, Haarlem, Oudewater and Zwolle, as well as German towns.

Born in Amsterdam in 1817, Springer came from a family of building contractors.  His brother Heindrik was a professional architect and he introduced Cornelis to the principles of perspective and architectural design which were to shape his favourite subject matter: townscapes.  He studied at the Amsterdam Academy of Fine Arts under Jacobus van der Stok (1795-1874) and Herman Frederik Carel Ten Kate (1822-1891). He then continued his training under Kaspar Karsen between 1835-7.  Karsen also specialized in townscapes.  During his early career, Springer occasionally collaborated with Wouterus Verschuur (1812-1874), who painted the figures and horses in several of his landscapes.

Springer was a prolific painter, exhibiting regularly in Amsterdam and The Hague between 1834 and 1890.  As a member of the Felix Meritis Society of Amsterdam, he was awarded a gold medal in 1847 and in 1865, he became a Knight of the Belgian Order.  Among his pupils were Adrianus Eversen, Johan Adolph Rust and Johan Conrad Greive.

The work of Cornelis Springer is represented in many museums including the Gemeentmuseum, Arnhem, the Museum Boymans-van Beuningen, Rotterdam and the Rijksmuseum, Amsterdam.