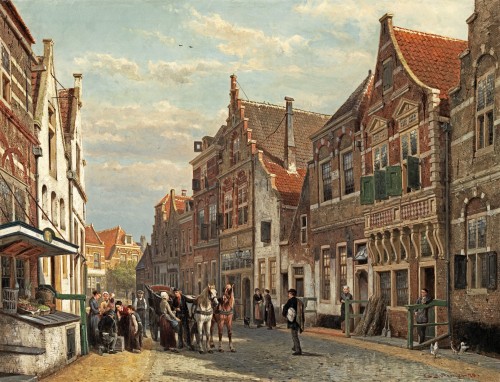 This painting has been authenticated by Willem Laanstra and will be included in his forthcoming catalogue of the complete works of Cornelis Springer in 2023/24, as no. S 78-2

The origin of the town of Oudewater is obscure and no information has been found concerning the first settlement of its citizens. It is also difficult to discover the origins of its name; one explanation being a reference to old-water-meadow. Oudewater was an important border city between Holland and Utrecht and was of great strategic importance. The town was granted city-rights in 1265 by the bishop of Utrecht, Hendrik van Vianen. In the history of the Netherlands, the city of Oudewater has played an important role. Oudewater took its place in the First Free States-council in Dordtrecht on 19th July 1572 and was one of the twelve cities taking part in the first free convention of the States General in Dordrecht. This was a meeting that laid down the origin of the State of the Netherlands as we know it, under the leadership of the House of Orange. This happened at the beginning of the Eighty Year’s War (1568-1648), when the Netherlands were still part of the Spanish Empire. After the beginning of this war, the city was conquered by the Spanish and most of its inhabitants were killed. In the 16th and 17th centuries, Oudewater was an important producer of rope. In the surrounding area hemp was cultivated. From these years on, the inhabitants earned an ample income for their daily maintenance and were able to save enough money to build good housing and buildings. Today, Oudewater has a monumental, protected city centre with more than 250 protected buildings.

From the beginning of his career, Cornelis Springer was impressed by the architecture of historical buildings. For this painting, Springer has chosen a sunlit view in the so-called Wijdstraat in Oudewater, in which the facades and architectural details alternate for each building. A logical choice considering his education with Kaspar Karsen (1810-1896) and the advice of his brother, the architect Hendrik Springer (1805-1867). More or less central in the composition are the bell gable with the four open shutters and the typical Arcadian construction (first house on the right in the painting) and the house with the stepped gable, called The Ark, a little further up. In terms of architectural style, this house can be regarded as one of the oldest and still best-preserved houses in Oudewater. The house was built in 1615 according to the witness of the cartouche bricked into the facade with the Old Dutch text: ‘Alst Godt behaecht Beter beniit dan beclaecht-1615,’[2] still visible to this date. In the background, the houses on the canal leading to the so-called Visbrug, form a perfect closure. The elements which the artist did not like, he changed according to his own preferences in accordance with his artistic vision, to maintain the balance of the composition. This is apparent from a photograph by E.C.R. Rahms of the same street dating about 1880 (fig.3). Opposite Wijdstraat 23-25 (see fig.4), Springer had a good overview and image of all architectural elements. This panel may be considered as one of Springer’s best works from that period. The entire composition gives a very good example of his feeling for structure linked with intimacy. The rhythm of differences in heights, the emphatic accent of the vertical lines, the contrasts between light and dark and the different postures in the figure groups, give this painting a complex character. The total of 16 figures and the two horses are placed in the painting with a correct sense of proportion and anatomy and although the architecture is central, the figures are not dominated in their movement. The painting also contains a wealth of pictorial and architectural details that are anything but fragmentary. In accordance with his normal working method, Springer first sketched the parts he considered important in pencil in sketchbooks; he always took one or more with him on his travels. On this basis he made a black chalk drawing of almost the same size as the painting. .[3] This is also the case with the above-mentioned view in the Wijdstraat of Oudewater. On the basis of the artist’s notes, the development process can be traced accurately to the day. He appears to have worked on it for almost 20 days, not counting the pencil sketches, according to the following schedule in Springer’s own original handwritten description:

Based on a report by Willem Laanstra

Fig.1 Image of the artist’s label and seal attached to the reverse

Fig. 3 Photograph of the Wijdstraat in Oudewater by ECR Rahms circa 1880.

Fig. 4 Annotated map of Springer’s location and the painted view.

Cornelis Springer was one of the most accomplished Dutch painters of town views.  His paintings are characterized by their topographical accuracy and an interest in rendering the effects of light.  They are reminiscent of the earlier Dutch seventeenth and eighteenth century masters Jan van der Heyden (1637-1712) and Issac Ouwater (1750-1793).  Springer's subjects included views of Amsterdam, Alkmaar, Den Briel, Enkhuizen, Haarlem, Oudewater and Zwolle, as well as German towns.

Born in Amsterdam in 1817, Springer came from a family of building contractors.  His brother Heindrik was a professional architect and he introduced Cornelis to the principles of perspective and architectural design which were to shape his favourite subject matter: townscapes.  He studied at the Amsterdam Academy of Fine Arts under Jacobus van der Stok (1795-1874) and Herman Frederik Carel Ten Kate (1822-1891). He then continued his training under Kaspar Karsen between 1835-7.  Karsen also specialized in townscapes.  During his early career, Springer occasionally collaborated with Wouterus Verschuur (1812-1874), who painted the figures and horses in several of his landscapes.

Springer was a prolific painter, exhibiting regularly in Amsterdam and The Hague between 1834 and 1890.  As a member of the Felix Meritis Society of Amsterdam, he was awarded a gold medal in 1847 and in 1865, he became a Knight of the Belgian Order.  Among his pupils were Adrianus Eversen, Johan Adolph Rust and Johan Conrad Greive.

The work of Cornelis Springer is represented in many museums including the Gemeentmuseum, Arnhem, the Museum Boymans-van Beuningen, Rotterdam and the Rijksmuseum, Amsterdam.

[2] ‘If it pleases God, better to be envied than lamented.’

[3] This charcoal sketch was auctioned on 1st December 1891 as part of the legacy of Springer: Fred Muller, Amsterdam, lot 221.

[4] Springer was not happy with the result, so he painted these houses again. 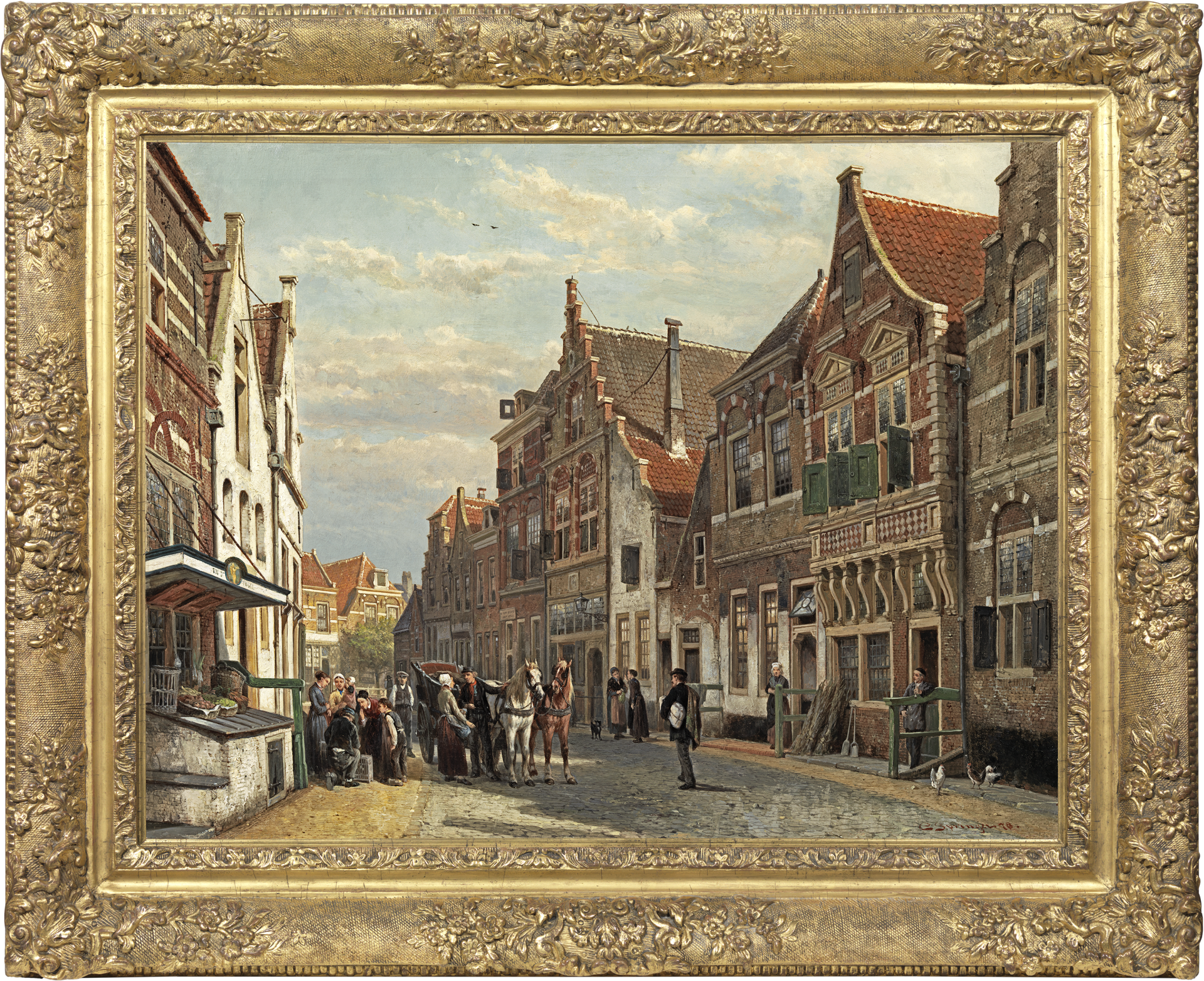