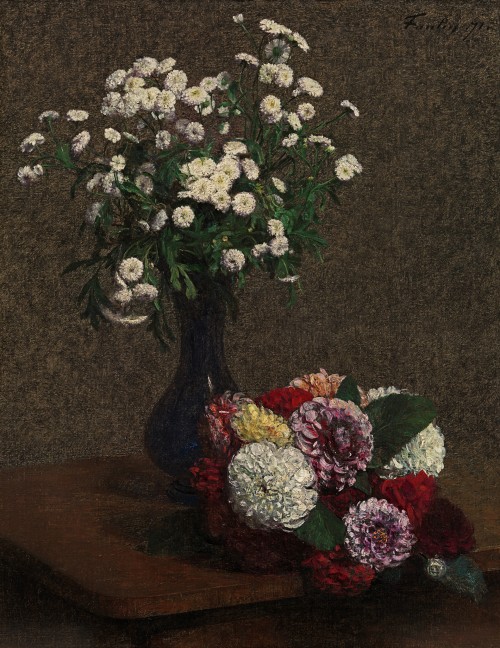 In an antique carved and gilded Louis XIV frame

James Abbott McNeill Whistler was surely thinking of his friend Henri Fantin-Latour when he wrote that an artist ‘looks at [Nature’s] flower, not with the enlarging lens, that he may gather facts for the botanist, but with the light of one who sees in her choice selection of brilliant tones and delicate tints, suggestions of future harmonies’[1].

Flower painting was an important part of Fantin’s oeuvre from the early 1860s into the 1890s. In 1862 the sculptor and art critic Zacharie Astruc called him the ‘visual poet of flowers’. Fantin combines a realistic observation of nature with a delight in the tactile qualities of paint, casting a spell of deep feeling reminiscent of his hero Chardin, with whom he was often compared.

This painting pairs a vase of camomile daisies, with their pure white, button-shaped flowers, and a bouquet of dahlias. The blooms cascade down from top left to bottom right, celebrating nature in all its abundance. Fantin creates a sense of space around the flowers by employing a neutral, textured grey-brown background and placing vase and bouquet on a wooden desk, which blends into the shadows. The dahlias stand out jewel-bright. Fantin revels in the complexity of their ruffled petals, whipping up crusts of impasted pigment and painting wet-in-wet so that the colours elide into one another. A river of red and purple dahlias cleaves between the white flowers, creating a harmonious chain of hues. In a letter of 1868 to Fantin, James Whistler noted the ‘ravishing patterns’ in Fantin’s work, with colours reappearing ‘like a strand of thread in a piece of embroidery’[2].

The flowers chosen by Fantin were popular garden staples, rather than the delicate exotics beloved of some seventeenth century Dutch flower painters. Dahlias were discovered in Mexico by the Spanish Conquistadors and introduced into European gardens from the beginning of the nineteenth century, when double varieties were bred. By 1871, when this painting was made, hybridization had produced thousands of new forms and colours.

The first owner of this work was Edwin Edwards (1823-1879), an English lawyer and amateur artist whom Fantin had met through Whistler on his visit to London in 1861. Edwin and his wife Ruth acted as Fantin’s agents in Britain, disseminating an enthusiasm for his work among the garden-loving nation. The Edwardses also shared with Fantin a passion for music, particularly Wagner; Mrs Edwards was a fine pianist. Fantin commented in 1871: ‘I am able to live quietly…doing what I please, thanks to Edwards’[3]. This was especially crucial during the Franco-Prussian War of 1870-71, when Paris was besieged. During this terrifying time Fantin lodged with his father and withdrew into his world of flower painting. When the war ended, Edwards bought all the paintings that he had produced. Gazing at Fleurs: camomille et dahlias, one would never suspect the era of turmoil in which it was created.

Henri Fantin-Latour was a painter of romantic figure subjects, portrait groups and still-life.  He received his earliest training from his father, a portrait painter, and in 1850, entered the studio of Lecoq de Boisbaudran.   Later, he studied under Courbet at the Ecole des Beaux Arts.

Much of his time was spent copying works in the Louvre, which he sold mostly to american and English clients.   It was there he met Manet in 1857 Whistler in 1858 and Victoria Dubourg, his future wife.

Fantin-Latour first exhibited at the Salon in 1861, and continued to contribute works almost annually up until 1876.   Amongst his best known paintings where his group portraits, providing a gallery of prominent personalties including artists, writers and musicians.

In 1859, Whistler persuaded Fantin-Latour to visit England, where he met Edwin Edwards who was to become a life-long friend and patron.   In England, he became particularly popular for his still life and flower paintings, notable for the restraint and elegance of their colour and composition.   Greatly admired by his contemporaries Jacques Emile Blanche wrote, 'Fantin studied each flower, each petal, its grain, its tissue, as if it were a human face...'

Towards the end of his life, Fantin-Latour became increasingly absorbed in music and developed a passion for Wagner, who inspired his more imaginative works which both in subject and style, show a strong affinity with the Symbolist movement. 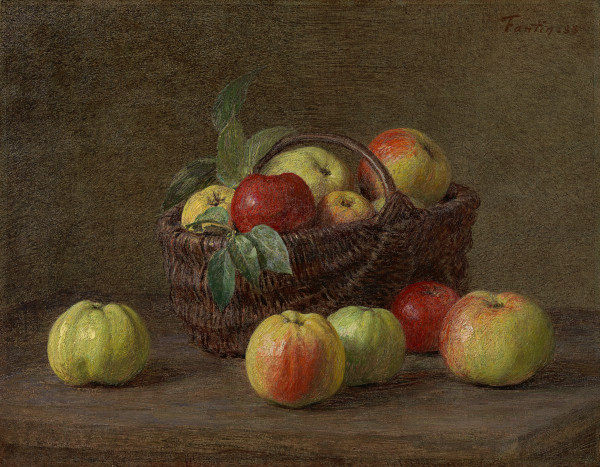 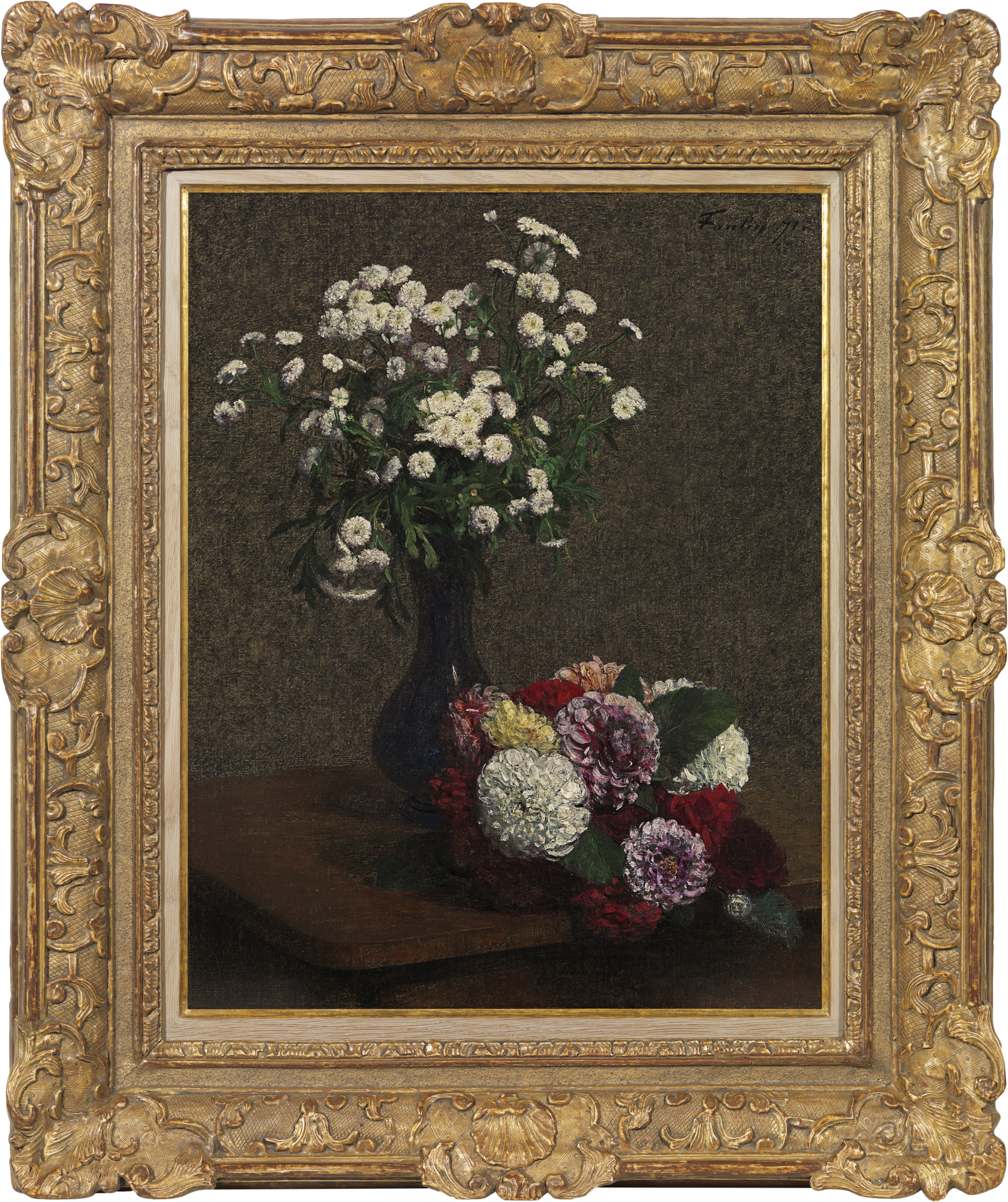