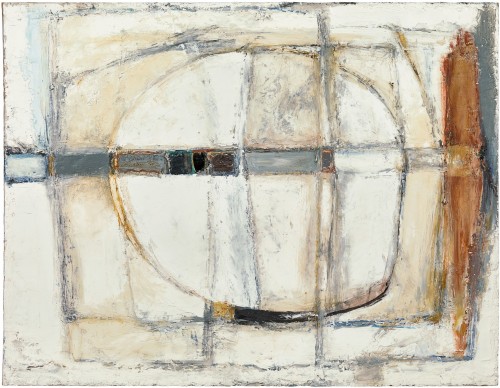 Gestural and organic, Paul Feiler’s painterly Horizontal Blue + Sienna, 1960-61, from the collection of David Bowie, employs an abstract vocabulary of circle and square in a tonal exploration of light inspired by the Cornish landscape; its luxurious surface of scumbled white, ochre and grey built up in richly textured layers. Michael Raeburn describes Feiler’s work of this period, as being ‘among the most remarkable evocations of the wildness of the Atlantic coast and sea by any painter, with a universal significance beyond the specific coast of Penwith.’[1] Feiler regularly spent time in Cornwall from 1950 and in 1953, with the proceeds of his sell-out one-man exhibition at the Redfern Gallery, bought a disused Chapel at Kerris, near Newlyn, which would be the centre of his work until his death. In 1974, Feiler and his family moved permanently to Cornwall and following the death of his friend Bryan Wynter, took over his studio at Paul, converted for Stanhope Forbes in the 1880s. A close friend of Peter Lanyon, with whom he taught at Corsham and at St Peter’s Loft in St Ives, Feiler’s response to Cornwall was deeply affected by ‘Lanyon’s immersion in his landscape’ which Raeburn suggests Feiler ‘…came to identify with his ‘own’ landscape of the Alps and Dolomites.’[2]

Paul Feiler was born in Frankfurt and came to England to be educated.  He attended the Slade School of Art, but at the outbreak of war was interned in Canada.  He returned to England in 1941 and taught at Radley and Eastbourne Colleges until the end of the war.  In 1946 he joined the staff of the West of England College of Art at Bristol and became Head of Painting in 1963.  He first visited Cornwall in 1949 and quickly became associated with the other painters living in the area.  In 1968 he received an Arts Council Award.  In 1953 he bought a chapel at Kerris, Paul, near Penzance where he lived with his wife, the painter, Catharine Armitage.  His studio at Paul, which he purchased in 1975, was Stanhope Forbes's first studio in Cornwall.