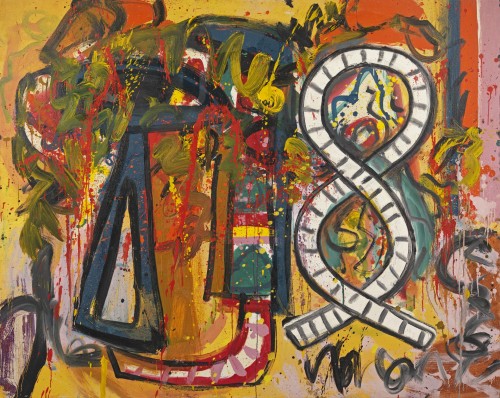 Jumpin' at the Woodside

Jumpin' at the Woodside

Signed, dated and inscribed on the reverse: JUMPIN’ AT / THE WOODSIDE / Alan Davie / Nov 1965

Jumpin’ at the Woodside was a song written in 1938 by the American jazz pianist, William ‘Count’ Basie (1904 – 1984), while rehearsing in the basement of the Woodside Hotel, New York.  Several of Davie’s paintings from the 1960s, such as Cure for the blues (1964), Portrait of Sonny Rollins (1964-6) and Jazz by moonlight (1966) refer to jazz in their titles.  As Michael Tucker explained in his article ‘Music Man’s Dream’, ‘Jazz has been one of the major transforming loves of Davie’s life. His whole way of working might be compared to the manner in which a great jazz musician will take a theme and develop its melodic, harmonic and rhythmic potential with a personal voice and a striking sense of time... Improvisation and intuition, which are central to the jazz aesthetic, have always been crucial to Davie.

Davie had a promising career as a professional jazz saxophonist with the Tommy Sampson Big Band in the late 1940s, before deciding to devote himself fully to painting...The rhythmic power and intuitive command of the exploratory form, texture and highly-keyed colour which distinguish so many of Davie’s paintings of the 1950s and 1960s are redolent of nothing so much as the imagination of such modern jazz masters as John Coltrane and Sonny Rollins.  Like the best of their solos, Davie’s free-flowing drawing with paint thickens and twists, advances and recedes, in a syncopated, polyrhythic dance of hypnotic intensity’ (Alan Davie, Lund Humphries, London, 1992, pp.71-88).