King George III reviewing the Fleet at Spithead, off Portsmouth Harbour, in 1773

from whom acquired by Ian Askew

London, Royal Academy, 1774, no.39 (His Majesty reviewing the Fleet at Spithead)

John Cleveley the Elder spent most of his career as a shipwright in the Royal dockyard in Deptford; he was a carpenter in Nelson’s future flagship, the Victory, at the time of his death in 1777. Cleveley was also a highly accomplished marine painter, his first known dated work being of 1747. He produced many scenes of the launch of warships which combine his expert knowledge of shipbuilding with a sense of a gala occasion, crowded with figures.

This painting depicts George III’s Review of the Fleet held at Portsmouth between 22nd and 27th June 1773, the first formal Royal Review and one of only five such events held in England during the eighteenth century. Many of the ships taking part had served in the Seven Years’ War (1756-63), under the command of Vice-Admiral Sir Thomas Pye in his flagship HMS Barfleur. George III set out from Kew in a Royal coach with scarlet outriders to meet his Admirals, who were assembled at the dockyard to escort the King to the waiting fleet anchored at Spithead. As well as the Royal Navy men-of-War, the Annual Register for 1773 described ‘a very great number of yachts, and other sailing vessels and boats, many of them full of nobility and gentry’ filling the channel.

Upon his arrival at Portsmouth, the King was saluted with a triple discharge of cannon, with each ship of the line simultaneously firing from their port batteries, visible as puffs of smoke on the horizon in Cleveley’s painting. George III was in his element, staying at Portsmouth for several days. He held a levée, dined on the Barfleur, conferred knighthoods, and visited the dockyard buildings. Setting down a pattern that would be followed in future Royal Reviews, the King inspected the Fleet from the Royal barge and sailed in the yacht Princess Augusta. The Annual Register reported that he expressed ‘the highest approbation of the good order and discipline of his fleet, the excellent condition of the dock-yard, arsenals, and garrison, . . . and showed the utmost satisfaction at the demonstrations of loyalty and affection with which he was received by all ranks of people’.

Cleveley depicts the event from the land battery which formed part of the defences of Portsmouth Harbour, an area today called the Hot Walls, because it is reputed to be where hot shot was prepared during the Spithead Mutiny of 1797. The gun carriages bear the Royal cipher. The foreground is dominated by fashionable spectators, Naval officers and marines, their clothes forming a patriotic panorama of red, white and blue. Such an extensive crowd of figures is unique in Cleveley’s oeuvre and reveals that he was an acute observer of humanity as well as of shipping. The delicate draughtsmanship of the figures and the attention paid to details of fashionable dress echo the work of Paul Sandby, who was a friend of Cleveley.

In the middle distance, the flagships dressed overall stand out amidst a forest of masts and spars. As well as the Barfleur, a 90-gun second rate ship of the line which would see distinguished service during the American War of Independence and at the Glorious First of June (1794), where she served as Rear-Admiral George Bowyer’s flagship, other prominent Royal Navy ships present at the Review included HMS Royal Oak, a 74-gun third rate ship of the line, launched at Plymouth in 1769, that fought at the Battle of the Chesapeake in 1781.

Cleveley exhibited this picture at the Royal Academy in 1774, and it seems very likely that he had been at Portsmouth during the Review. The other exhibit he showed that year was another Royal Review related subject, His Majesty sailing in the yacht at the head of the Blue Squadron to St Helens (St Helens Fort off the Isle of Wight in the Solent), and the following year he exhibited a picture of The Fleet saluting at Spithead, taken from the platform (no. 65) and another of His Majesty sailing into the harbour (no. 66), as well as a View of Freshwater bay, back of the Isle of Wight. Cleveley’s son, John Cleveley Jnr., also a painter, was present at the Review as well, and made drawings of the shipping taken from a boat offshore, two of which are in the National Maritime Museum, Greenwich (PAH9497 and PAH9498). Also among those present was the French-born marine painter Dominic Serres, who painted a set of four views of the event in 1775 (Royal Collection).

John Cleveley the Elder was a highly accomplished painter of ship portraits, dockyard scenes, sea fights and panoramic celebrations of mid-eighteenth century Royal Navy squadrons, the latter sometimes based on compositions by Willem van de Velde the Younger (1633-1707). His style is colourful, meticulous and with a thorough understanding of sea and ships. Despite his talent as an artist, officially he spent his entire career as a shipwright in the royal dockyard at Deptford.

Born around 1712, John was the son of Samuel Cleveley, a joiner of Newington Butts, Southwark. On 3rd November 1726 he was apprenticed to the joiner Thomas Miller, and then worked with John Hall, a shipwright and Deptford boat builder. On 9th June 1743 he became a freeman of the Shipwrights’ company. He worked in the royal dockyard and lived in King’s Yard Row, Dogg Street at least from 1747 until his death in May 1777; he is buried in St Paul’s, Deptford. Letters of administration granted to his widow the following year record that Cleveley was a ‘Carpenter belonging to his Majesty’s Ship the Victory in the pay of his Mys Navy’. The Victory was Nelson’s future Trafalgar flagship, held in ordinary (reserve) from her launch in 1765 until first commissioned for sea in March 1778.

Cleveley may have been taught to paint by the artisans employed to give early eighteenth century warships their decoration of coats of arms, classical figures and trophies. After the scandal of the cost of the carving on the Royal Sovereign, the Admiralty in 1704 declared that only the head and stern galleries of warships could be carved, and the number of specialist painters increased. Cleveley’s first known dated painting is of 1747. He produced many scenes of the launch of warships, especially at Deptford, which combine his expert knowledge of shipbuilding, delicate observation of the dockyard buildings and a sense of a gala occasion, crowded with figures. He contributed shipping to the prints of Sheerness, Chatham and Plymouth dockyards (1755-6) by Thomas Milton and made shipbuilding views in East Anglia. Cleveley exhibited at the Free Society from 1764 to 1776.

John Cleveley and his wife Sarah (1722-1798) had seven children. James (b.1752) was a ship’s carpenter in the Resolution on Captain Cook’s third voyage to the Pacific. His twin sons John Cleveley the Younger (1747-1786) and Robert (1747-1809) became marine artists. John Cleveley the Elder signed his works J. Cleveley, while his son signed as Jno Cleveley, Junr. at least until 1782.

The work of John Cleveley the Elder is represented in the National Maritime Museum, Greenwich, Glasgow City Art Gallery and the Yale Center for British Art, New Haven, CT. 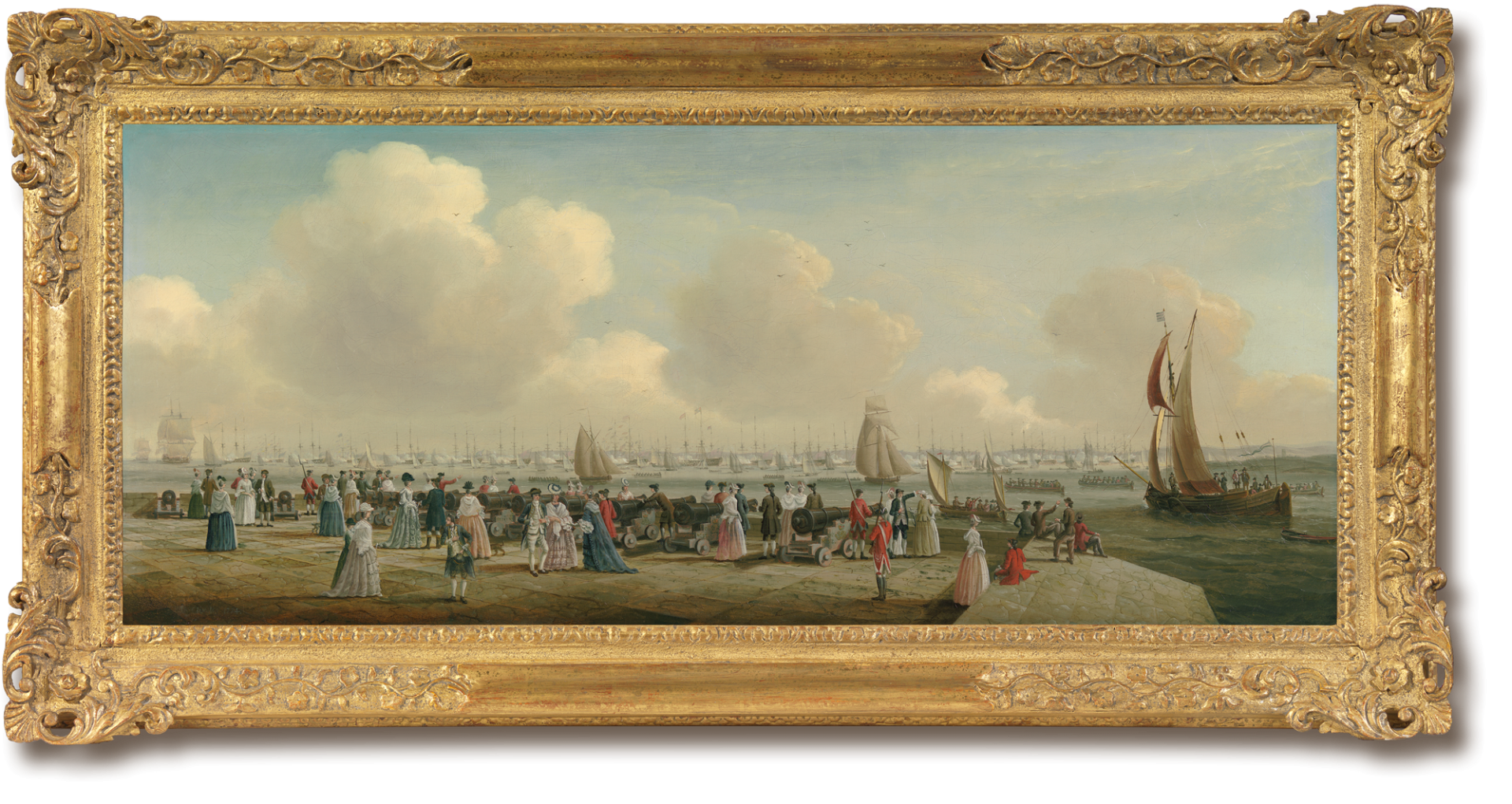