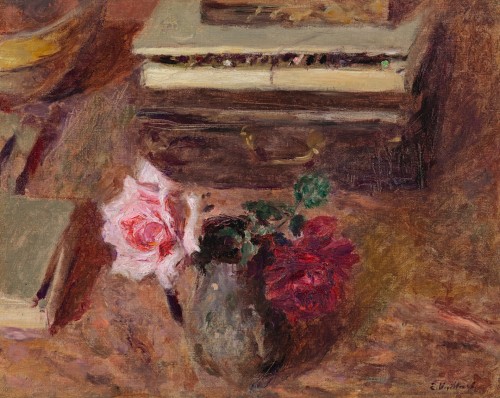 Probably Georges Rasamat, Paris (his collector’s stamp on the reverse);

from whom acquired by Jos Hessel

from whom acquired by a private collector, Europe

Edouard Vuillard’s painting is steeped in the intimisme of domestic life. As a student copying paintings in the Louvre, his preferred subjects were seventeenth century Dutch interiors and the still lifes of Jean-Baptiste-Siméon Chardin. Like John Constable with his Stour valley landscapes, Vuillard’s imagination was set free by the familiar. In 1889 he joined the Nabis (‘Prophets’), a group of artists including Paul Sérusier, Maurice Denis and Pierre Bonnard, who experimented with Synthetism, which prized memory rather than direct observation, simple blocks of colour and the deliberate focus on the two-dimensional picture plane. Vuillard’s paintings of the 1890s frequently feature his dressmaker sister and mother in their modest Parisian home. Works such as Interior, the dressmaking room, 1893 (private collection, USA)[1] employ a dark palette, with emphasis on simplification and pattern-making influenced by Japanese prints.

By around 1903-4, when Vuillard painted Les deux roses et la boîte de pastels, he had moved away from the Synthetist style and introduced more space into his paintings, while retaining a love of pattern and a richly decorative palette. He had segued into the haut bourgeois world of Jos Hessel, a partner in the art dealing firm of Bernheim-Jeune, with whom he began exhibiting in 1900. From 1901 until the First World War Vuillard spent summers in Normandy and Brittany with Hessel and his wife Lucy, who became his mistress and muse.

This painting was dated c.1910 (with a question mark) in the Vuillard catalogue raisonné. Matias Chivot, who is compiling a supplement to the catalogue, considers that it dates from c.1903-4, citing the rich impasto of the roses as typical of Vuillard’s handling at this period[2]. It exudes the air of sophisticated contentment characteristic of Vuillard’s paintings of interiors made in the first years of the twentieth century. He concentrates on the corner of a table with a few carefully-placed objects. In the foreground is a simple ceramic jug with the pink and the red rose. Vuillard delights in the complexity of the rose petals just as much as does Renoir. Their exuberance is contrasted by the geometric lines of the pastel box balanced upon a wooden case and the box to the left. The composition is unified by a dense interweaving of marbled brushwork which conjures up the atmosphere of the room and the mystery of light. Shapes dissolve into textured shadows, while vivid points of colour swim to the surface: the end of a bright green pastel; the rose petals; a swathe of golden glaze on a vase. Vuillard juxtaposes the tools of his profession – the pastel box – with the domestic detail of the vase of roses, symbol of a well-ordered household presided over by a female hand, perhaps an oblique reference to Lucy Hessel.

As Matias Chivot notes, the reverse of the canvas has the collector’s stamp of Georges Rasamat, who had a close connection with the Ballets Russes, which took Paris by storm in 1909. Rasamat was the art agent for the Ballets Russes’ designer Léon Bakst. Vuillard may have met Rasamat through his friend Misia Sert at her celebrated salons at the Hôtel Meurice. Les deux roses et la boîte de pastels was later owned by Jos Hessel and was lent by him to the Vuillard retrospective at the Musée des Arts Décoratifs, Paris in 1938, during the artist’s lifetime. 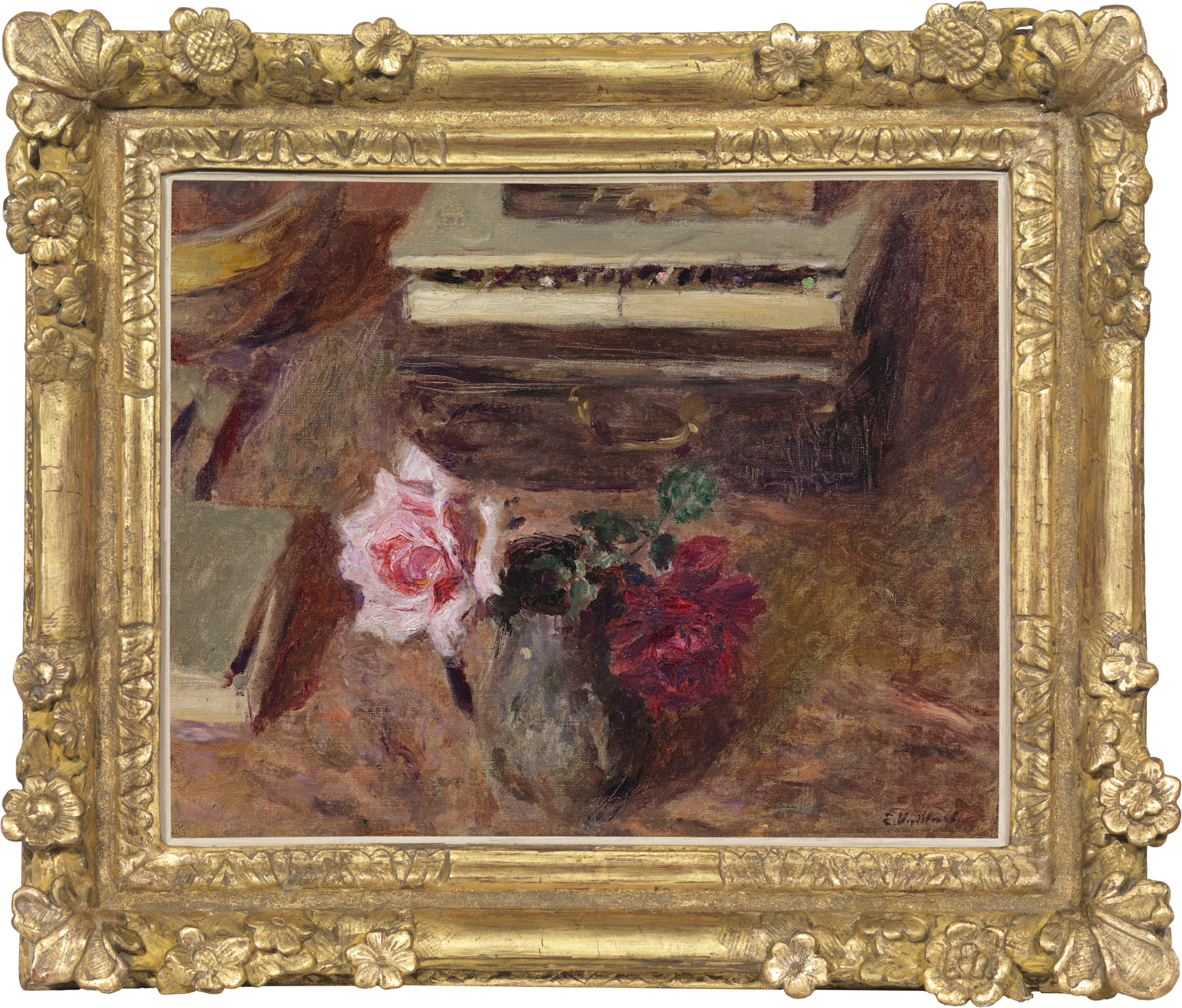