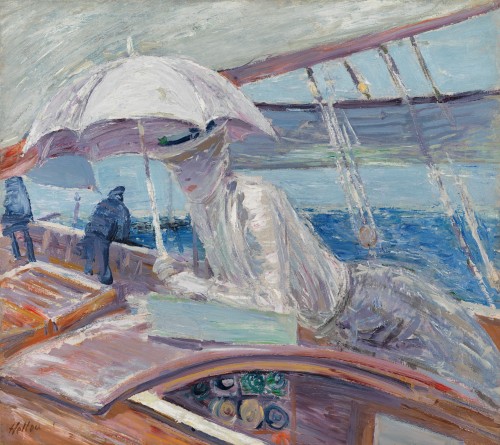 Born in Vannes on the Breton coast, Paul-César Helleu had yachting in his blood. From the 1890s his success as a society portraitist allowed him to develop a passion for sailing, which was to provide many motifs for his pictures. He wrote to Monet in the summer of 1896: ‘We have spent a month in Guernsey with Madame Hugo….A friend had a yacht and I went from Cherbourg to Saint Malo, and all along the coast. I have tried to paint yachts, but it’s really too difficult. You’ve got to study them like racehorses and besides, they’re constantly moving’[1].

In 1898 Helleu rented a yacht, the Barbara, to try to give his beloved wife Alice some comfort after a family tragedy. The following year he purchased the Bird, the first of several yachts that he owned. The Helleus summered in Deauville and sailed the Channel to equally fashionable Cowes, where the Royal Yacht Squadron hosted Cowes Week and the artist mingled with members of British high society who also became his clients.

This painting depicts Alice relaxing on the bridge of the Bird, her lithe, elegant figure dressed in the pale colours that Helleu loved: he was among the first, in the mid-1880s, to dispense with gloomy nineteenth century interiors and paint his apartment white. Alice was always exquisitely dressed, sometimes by Worth and Doucet, but usually by Madame Chéruit. Her white parasol, hat and blouse are shot through with coloured shadows of lilac, grey, buttermilk and eau-de-nil, her pensive, poetic face hidden by the gauze of her veil. Her shimmering figure is thrown into contrast by the royal blue of the sea, the sailors’ navy uniforms and the burnished orange-brown of the yacht’s woodwork. Painted with long licks and dabs of colour, the vitality of the handling conjures up the brisk breeze and the speed of the yacht.

Paul-César Helleu had met the flame-haired Alice Guérin in 1884, when she was fourteen and he twenty-four; they married two years later. Described by her daughter Paulette, Mrs Howard-Johnson, as having ‘a great deal of taste, a sharp mind and an unfailingly sweet nature’[2], Alice remained Helleu’s muse for the rest of his life. Alice and her children were frequently portrayed by Helleu aboard the family’s various yachts, Alice usually an impeccable vision in white. Figaro Illustré in September 1901 devoted a whole issue to Helleu’s yachting pictures, seeing yachting as a defining passion of the times: ‘L’amusant, le joli, le passionnant bibelot qu’un yacht, surtout un yacht à voiles! Et si moderne, si expressif des moeurs et des élégances d’aujourd’hui!’[3]