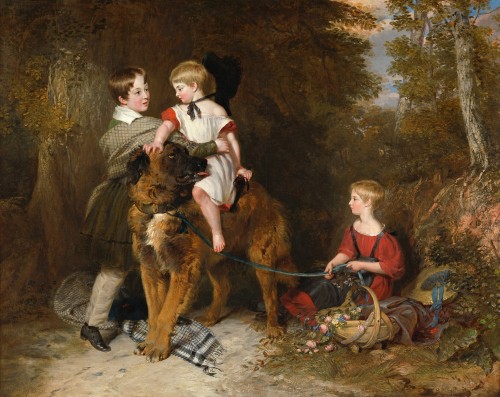 In its original composition gilded frame

By descent in the family to Lord Coleridge (b.1937), The Chanter’s House, Ottery St Mary, Devon

London, Royal Academy, 1834, no.334 (Portraits of the children of the Rev. Edward Coleridge of Eton College. The dog by E. Landseer, R.A.)

This charming work is a collaboration between Charles Landseer, who painted the children, and his brother Edwin, who depicted the magnificent St Bernard dog at the centre of the composition. As much a personality as the children, this gentle giant tolerates the baby sitting on his back and the control of the little girl holding him by a ribbon leash, as she sits by the path with her newly-gathered flowers. Edwin Landseer expresses the solidity of the animal and his subtle brushwork captures every nuance of texture and colour in the thick coat. Edwin’s empathy with animals and his ability to show them reacting in a natural way with humans had already made him celebrated; he was to become the favoured animal painter of the Royal family and creator of such iconic Victorian animal images as the Monarch of the glen, c.1851 (John Dewar & Sons Ltd., London).

The happy family group evokes both the carefreeness and the responsibilities of childhood: the eldest boy tenderly supports the baby, while his sister supervises the family pet. The freshness of the wooded landscape and the flowers enhance the delicate beauty of the children; the precious and fleeting years of childhood are to be treasured and preserved in paint.

The sitters are children of the Rev. Edward Coleridge (1800-1873), then Assistant Master at Eton, and Mary Keate (d.1859), whom he had married in 1826. Edward Coleridge came from a long line of pedagogues and clergymen originating from Ottery St Mary, Devon; his uncle was the poet Samuel Taylor Coleridge (1772-1834), the family’s sole rebel. ‘A fine, handsome boy, full of spirits, [who] grew into an equally fine, handsome man’[1], Edward was a fellow of Exeter College, Oxford, before becoming a master at Eton in 1824. He married one of the six daughters of Eton’s Headmaster, the diminutive but formidable John Keate (1778-1852), who ruled the school in the period when it really was an apprenticeship for the field of Waterloo. Keate once flogged eighty boys in one night to put down a rebellion (the boys cheered him at the end of it, and later subscribed a large sum as a leaving present). Edward Coleridge, though a highly popular and inspiring master, both in the classroom and on the playing field, was equally unsqueamish about corporal punishment. ‘He had by far the most successful house at Eton for many years, and when he flogged the boys, which he did with a will, he said he loved them more for every stroke he gave them. He bore the infirmities of old age with indifference, the fruit of his buoyant, joyous nature. He was a complete embodiment of the muscular Christian’[2].

Edward and Mary Coleridge had four sons and a daughter. He became Lower Master of Eton in 1850 and Fellow in 1857, retiring in 1867. In 1862, after Mary’s death, he married Mary Bevan, and the same year became Vicar of Mapledurham near Reading. The sensitive Landseer portrait of his children is not the only evidence of Edward Coleridge’s artistic interests. A member of the Ecclesiological Society and the embryonic Oxford Movement, he helped to raise £30,000 towards the building of St Augustine’s College, Canterbury, designed in the Gothic Revival style by William Butterfield. Butterfield subsequently rebuilt The Chanter’s House at Ottery St Mary, where the Landseer portrait hung for many years, for Edward Coleridge’s nephew, Lord Coleridge (1820-1894). CHARLES LANDSEER, RA

Charles Landseer was the son of the engraver John Landseer (1763-1852) and brother of the printmaker Thomas (1795-1880) and painter Edwin (1802-1873). He trained with his father and the history painter Benjamin Robert Haydon (1786-1846) before studying at the Royal Academy Schools in 1816. In 1823 he accompanied Sir Charles Stuart de Rothesay in HMS Wellesley on Rothesay’s mission to Portugal and Brazil to negotiate a commercial treaty with Pedro I, Emperor of Brazil. Landseer’s drawings of the trip were exhibited at the British Institution in 1828. He exhibited at the Royal Academy from 1828 until his death in 1879, specialising in romanticised history paintings, particularly subjects from the Civil War, and literary themes such as Clarissa Harlowe in the sponging house, RA 1833 (Tate Britain, London). He also painted portraits, genre scenes and animal studies. Charles was elected ARA in 1837 and RA in 1845. Probably due to the influence of his prodigiously successful brother Edwin, he became Keeper of the Royal Academy Schools in 1851, but was criticised for inadequate teaching and retired on full salary in 1873. A legacy from Edwin allowed Charles to leave £10,000 to the Royal Academy to found the Landseer Scholarships.

Edwin Landseer was one of the most successful artists of the Victorian age and the leading exponent of animal painting. The son of the engraver John Landseer (1763-1852) and brother of the printmaker Thomas (1795-1880) and the painter Charles (1799-1879), he was taught by his father and Benjamin Robert Haydon before attending the RA Schools. A child prodigy, he won the Silver Palette of the Society of Arts for draughtsmanship in 1813 and began exhibiting at the RA in 1815. Landseer was made ARA in 1826 at the youngest permitted age of twenty-four and RA in 1831.

From an early age Landseer drew animals at the menagerie at Exeter Change in the Strand and studied anatomy through dissection. He was brilliant at capturing the physical qualities of animals but also added an anthropomorphic element which made such works as Dignity and impudence, 1839 (Tate Britain, London), showing a bloodhound and a terrier, and The old shepherd’s chief mourner, c.1837 (Victoria and Albert Museum, London) (his faithful sheepdog) so popular. Many of his works were engraved by his brother Thomas. In 1824 Landseer went with CR Leslie on his first visit to Scotland and was enraptured by the Highland landscape. It formed the subject for many of his most famous paintings, notably Monarch of the glen, c.1851 (John Dewar & Sons Ltd., London).

Landseer attracted society patrons including the family of John, 6th Duke of Bedford; he was particularly close to the Duchess and may have entertained thoughts of marrying her after the Duke died in 1839. He was also a favourite of the Royal Family, painting many portraits and conversation pieces of Queen Victoria and Prince Albert with their children and pets, including Windsor Castle in modern times, 1841-5 (Royal Collection, Windsor Castle). In the early 1840s he gave lessons in etching to the Queen and Prince Consort. He was knighted in 1850.

Landseer painted romantic medieval subjects and illustrated the 1854 edition of the Waverley novels by Sir Walter Scott, whom he much admired. In 1858 he was commissioned to design four huge bronze lions to flank Nelson’s Column in Trafalgar Square (still in situ); these were put into place in 1867. In 1865 Landseer refused the honour of PRA on the grounds of ill health. Beneath his charm and ebullience lay a melancholy, self-doubting nature which he tried to suppress with alcohol and overwork. In 1872 he was confined for a period to an asylum and died the following year. 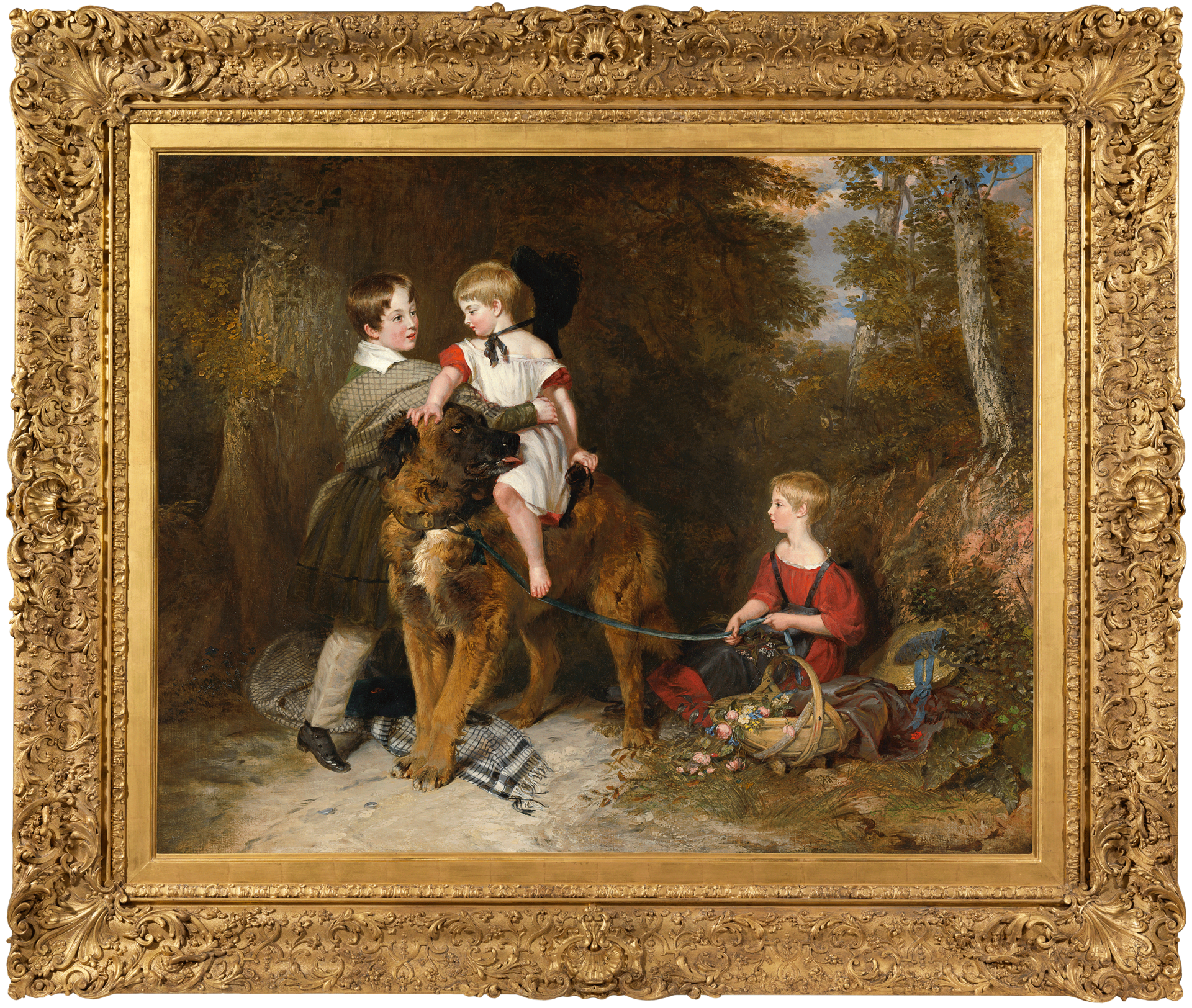