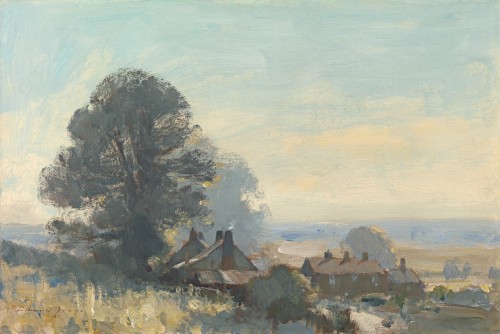 from whom purchased circa 1973 by a private collector, UK;

Throughout his life, Seago was plagued by a heart condition, paroxysmal tachycardia, with which he was first diagnosed as a boy of eight. Ironically, it was during the extended periods of ‘forced leisure’ when he was rendered house-bound that Seago was able to realize his passion for painting. Seago later reflected upon these periods as being ‘spells of sheer delight’ as he was able to practice his precociously sensitive observation of nature.

As his poor health prevented a regular art school training, Seago was largely self-taught. However, throughout his life several artists took a personal interest in his work. Sir Alfred Munnings, who lived in Dedham on the Essex-Suffolk border, was one, as was Bertram Priestman, an East Anglian landscape painter with whom Seago corresponded for most of his life. Priestman encouraged Seago to paint quickly, a skill he developed into a virtuoso talent, but above all, to hold Nature as the ideal, receiving inspiration from its beauty rather than to copy it directly. John Masefield, the Poet Laureate, was another with whom the artist maintained lifelong contact. Together they collaborated on several publications, including The Country Scene of 1937 and Tribute to Ballet of 1938, Seago providing the illustrations, Masefield the poems. It was Masefield who encouraged Seago to broaden his interests in all aspects of English country life.

Seago’s style took inspiration from other influences, including seventeenth century Dutch landscape painting, East Anglia bearing many similarities to Holland. He was inspired by John Constable and Richard Parkes Bonington, by nineteenth century Norwich School artists such as John Crome, and by twentieth century painters including Arnesby Brown, Wilson Steer and Richard Sickert. The paintings of Eugène Boudin influenced his mature style, as did the work of James McNeill Whistler.

Seago’s prodigious activities in the years prior to 1945 were fuelled by the eclecticism of his interests. During the 1930s, he lived an unconventional, somewhat bohemian existence, travelling and working amongst circus folk, gypsies and ballet dancers whilst simultaneously mixing in aristocratic circles. Henry Mond, 2nd Lord Melchett, art connoisseur, patron and friend, commissioned Seago to paint several portraits whilst living at Woodfalls, the Melchett family home. It was with Melchett that the artist first travelled in 1933 to Venice and was exposed to the art of the great Italian masters, igniting his immense attachment to this extraordinary city, which he later captured in many of his most successful oil painting and watercolours. During this time Seago also made many portraits and equestrian paintings in the UK and abroad.

His friendship with George VI’s sister Princess Mary, Countess of Harewood, proved another important association which, following the Second World War, developed into a close acquaintance with the Royal Family. Queen Mary, Queen Elizabeth the Queen Mother, Prince Phillip, Duke of Edinburgh, and Prince Charles, Prince of Wales, admired and collected his paintings, and received many as gifts from the artist. Seago had met George VI during the War on expeditions as an unofficial war artist with Lieutenant-General Harold Alexander on the Italian Campaign, years vital in formulating his later style.

Seago’s language of motifs was further developed during the 1950s and 60s on his numerous travels, at first aboard his ketch Endeavour, then his yacht Capricorn, to northern France and Holland, and later by air to more remote destinations, which he called ‘far off painting grounds’. In 1956, an invitation from the Duke of Edinburgh took Seago on board the Royal Yacht Britannia on its world tour across the Antarctic, the south Atlantic and West Africa. At each destination Seago found inspiration in their ‘otherness’, in the strange and unusual light and atmospheric effects: the sheer blue cliffs of the Antarctic glaciers; the stark, monumental peaks of South Georgia; the colourful crowds of the Gambia. Seago adapted his technique to express this in his painting, continually modifying his palette, balancing light and dark and reconciling a multiplicity of shapes.

However, it was to his beloved East Anglia that Seago continually returned. He wrote ‘Perhaps one has to be born and bred there for it to really get into one’s blood. But it has a powerful hold on me, and whenever I go, I feel a longing to return there’. Throughout his life Seago remained susceptible to nature’s manifold manifestations. He was intensely interested in the transformation of the landscape by the ‘in-between’ stages, sunrise, early morning, late afternoon, evening and dusk, by the rain, mist, fog and snow, and by the seasons. He was fascinated by the sky, studying the ephemeral changes of its moods and movements. Seago painted the Broads with an endless range of atmospheric effects, and an eclecticism of subject matter he found in this world of water and sky.

Commercially, the most important developments for the artist occurred in the Post-War years where he began important relationships in 1945 with P&D Colnaghi Galleries in London and in 1950 with the Laing Galleries, Toronto. Both galleries held regular successful exhibitions, as did the Kennedy Galleries in New York, which held five important exhibitions between 1952 and 1961, and Everard Read in Johannesburg, where his work was exhibited from 1968. The popularity of Seago’s paintings was the stuff of legend. Eager purchasers would queue from 6.30am along Old Bond Street in anticipation of having the first pick of the fifty or so hitherto unseen paintings on offer at Colnaghi. The demand gained momentum until the gallery was forced to issue numbered catalogues in order of each person’s arrival. Seago’s paintings were also exhibited at the Royal Academy and the Paris Salon. He was elected RBA in 1946, ARWS in 1957 and RWS in 1959.

Seago was the epitome of artist as existentialist, refusing to conform to conventional social mores. His attitudes to life were reflected in his art, choosing to ignore the dictates of contemporary critical wisdom about what was innovative and avant-garde in art, preferring to paint only what was important to him. Painting was his raison d’être. This all came to an end however whilst on a painting trip to Sardinia, when Seago succumbed to a brain tumour. He died in London on 19th January 1974. 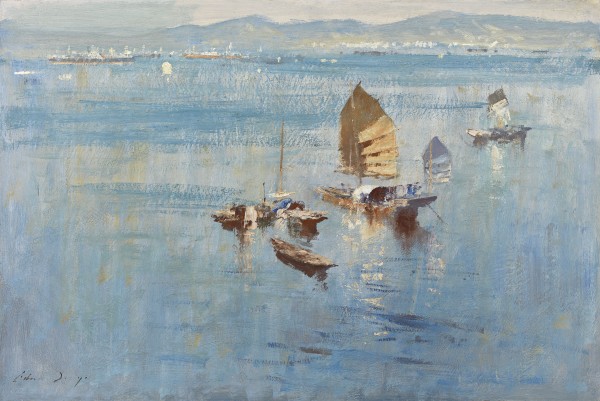