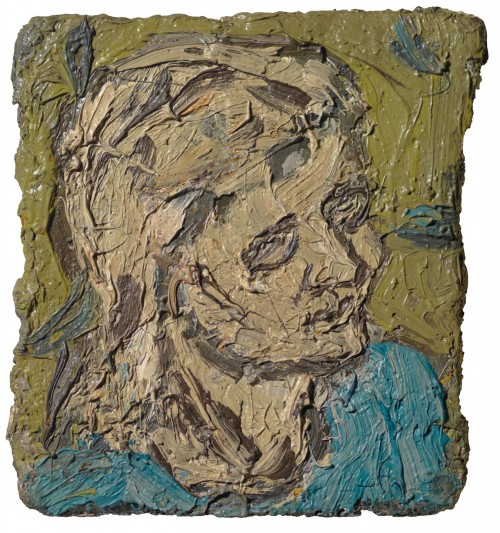 In a canvas and cushion modern frame

May Gruber, acquired from the above in 1989, then by descent

this exhibition then travelled to California, LA Louver Gallery, November–December 1984

This painting will be included in the forthcoming publication Leon Kossoff: Catalogue Raisonné of the Oil Paintings edited by Andrea Rose, with research by Andrew Dempsey and Stephanie Farmer, to be published by Modern Art Press

Small head of Rosalind II is an intimate, introspective portrait of the artist’s wife, her eyes closed in a posture of melancholic repose seemingly at odds with the restless urgency of Kossoff’s instinctive execution. Recording the dynamic encounter of artist and sitter, artist and medium, Head of Rosalind accentuates the importance of the figure and the primacy of paint in Kossoff’s work, as well as documenting the relentless reconstruction or excavation of the image which renders the mass of pigment a palimpsest. Evoking an early Renaissance Madonna, Rosalind’s representation emerges from the movement and flow of paint, her contoured features defined with dark incised lines dividing densely impasted areas of muted blue, green and cream.

Kossoff began producing portrait and nude studies of his wife Rosalind in the 1950s. Removed from the heavy charcoal depictions central to his practice, the present work demonstrates a departure from the tenebrous tonality of Kossoff ’s earlier works, showcasing a lighter, more varied palette. Rosalind’s profile is constructed through thick and enlivened layers of pale flesh paint that add to the exaggerated curve of her cheek, the strong line of her neck. As Paul Moorhouse observes, Kossoff ’s distinctive portrait studies reveal unguarded moments, that

vividly recreate an acute and unidealised physical sense of another’s presence: ‘they transmit a sense of dignity … combining an honest warmth of feeling with excitement in the act of creation.’[1]

Leon Kossoff was born in London and has lived there all his life, growing up in Islington, Shoreditch, Bethnal Green and Hackney, and devoting his career to painting the city he knows so well. Building sites, railway lines, underground stations, Churches and swimming pools feature amongst his densely painted depictions of the city of London, as well as intimate portraits of his immediate family and friends. While attending Hackney Downs (Grocers) School in 1939, Kossoff was evacuated to King’s Lynn, Norfolk for three years, during which time his interest in art was encouraged. Back in London, Kossoff went to life class at Toynbee Hall, Commercial Street in 1943 before attending commercial art classes at St Martin’s School of Art. The artist’s studies were interrupted by Military Service with the Royal Fusiliers in 1945. Attached to the 2nd Battalion Jewish Brigade, he served in Italy, Holland, Belgium and Germany.

Kossoff returned to London again in 1948 and the following year enrolled on a fine art course at St Martins, where he met and befriended Frank Auerbach who encouraged him to attend David Bomberg’s evening classes at Borough Polytechnic from 1950-2. During the 1950s, Kossoff frequently travelled to Auerbach’s studio and the artists would model for each other. He went on to study at the Royal College of Art, London from 1953-56. In 1953 Kossoff left his Mornington Crescent studio for Bethnal Green Road and married Rosalind (often referred to as Peggy in his paintings). Two years later their son David was born. Helen Lessore invited the artist to exhibit at the Beaux Arts Gallery in 1956, where he held his first one-man show the following year and continued to exhibit until it closed in 1965. Kossoff taught during the 1960s at the Regent Street Polytechnic, Chelsea School of Art and St Martin’s School of Art, London.

In 1976 Kossoff’s work featured in the seminal exhibition, The Human Clay, organised by R.B. Kitaj with the Arts Council of Great Britain in which he defined a School of London that included Michael Andrews, Frank Auerbach, Francis Bacon, Lucian Freud, Kitaj and Kossoff. Kossoff was chosen to represent the United Kingdom at the Venice Biennale in 1995 with a solo show in the British Pavilion.

In 1966 Kossoff moved his studio to Willesden Green, where it remains. He continues to live and work in London.