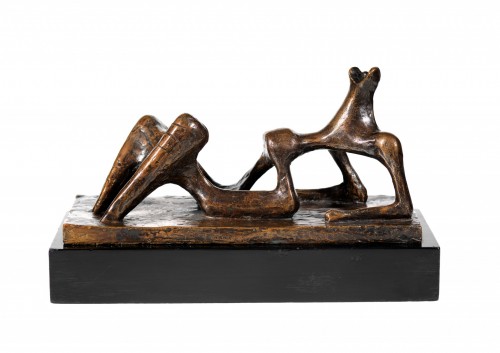 Small maquette no.2 for Reclining figure

Signed and numbered on the side of the base: Moore 1/9

Maurice & Muriel Fulton, acquired from the above in June 1965

The University of Chicago, Chicago’s Homage to Henry Moore, An Exhibition of Sculpture and Drawings by Henry Moore, December 1967, no.108, as Reclining Figure

This striking bronze is a maquette for one of Moore’s most significant sculptures, the large Reclining figure: Festival, 1951, commissioned by the Arts Council for the Festival of Britain (now in the collection of the Scottish National Gallery of Modern Art, Edinburgh). Though the Arts Council originally requested a family group, Moore envisaged a reclining figure from a drawing in 1950, which developed into one of the most powerful works of his career and his first life-sized reclining bronze. For the artist, the sculpture’s profundity lay in the progression of his stylistic development: ‘The “Festival Reclining Figure” is perhaps my first sculpture where the space and form are completely dependent on and inseparable from each other. I had reached the stage where I wanted my sculpture to be truly three-dimensional. In my earliest use of holes in sculpture, the holes were features in themselves. Now the space and the form are so naturally fused that they are one.’[2]

The integration of space and form which Moore achieved in this work was largely a result of the use of bronze which enabled him to open up the sculpture in a way impossible in wood or stone. The full-size figure also signifies a change in the artist’s working methods, being one of the first post-war sculptures made from a plaster working model, rather than terracotta or clay. From this time, plaster was Moore’s preferred modelling medium.[3] Bronze as a material allowed Moore the ‘freedom to explore the relationship between mass and space more radically than he could within the confines of stone and wood. In these materials holes are opened up consciously, with the shape around the hole often being restricted by the size and shape of the block. In bronze there are no such restrictions.’[4]

The conception of the figure as a public work with no fixed location (due to the temporary nature of the exhibition) may have provoked the assertive independence of the piece with spectacular views created within the work rather than against which it would be seen. Looking lengthways through the sculpture’s elegant interior, the balance between sinuous form and space recalls Moore’s enduring fascination for caves. As Moore continued to strive for more expansive three-dimensionality in his works, the creation of these maquettes slowly replaced his sketches and drawings as the initial stages for larger works. These maquettes were a way in which Moore could experiment with the relationship between form and space in his sculptures and find the balance between both so that one was not more important than the other. As the artist stated, ‘Now that I work with a maquette, I can turn it over, hold it, look at it from underneath, from above, and the smaller it is in a way the more do you do this turning…I think now that in working with maquettes, my sculpture is more truly dimensional.’[5]